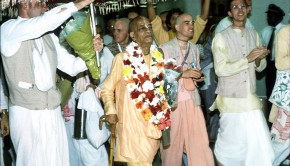 Serving souls who are not completely free from vice does not guarantee one the same attraction to the Lord. Rather one cannot advance very well toward