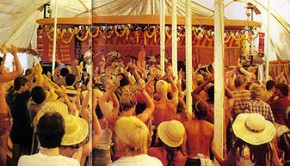 Temple In The Streets

We roam the country with a collection of tents, Srila Prabhupada's books and the Hare Krishna maha-mantra. We set the Festival in the Streets up in parks and on street corners and everywhere we make a difference. In this way we offer the ancient, yet fresh and completely relevant message of Krishna consciousness to all