She exposed her body to his view and said, "You are so beautifully built. What woman could control her mind after seeing you? I want to be united with you."

The banishment of Kaliya from the Yamuna has important spiritual significance. Those creating trouble among pure devotees meet with initial success 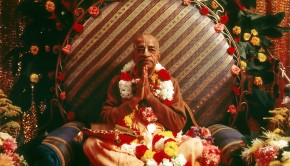 At any time I may be out of the scene, therefore I think it is necessary to give instruction to my disciples how they shall manage the whole ISKCON by a

It is not our business to change, simply to receive the knowledge from Prabhupada and distribute it, without adding or subtracting, to the people we meet

Yamaraja is a GBC, but he made a little mistake. He was punished to become a sudra. The GBC's should be very, careful to administer the business of