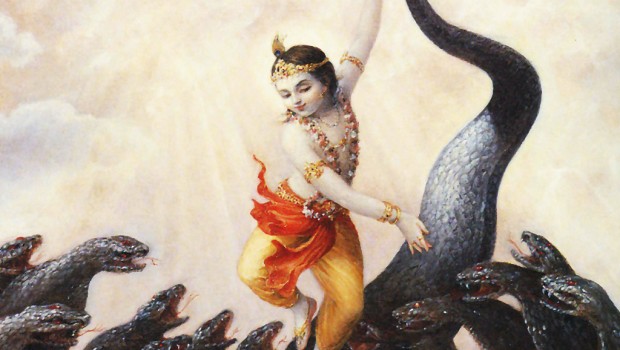 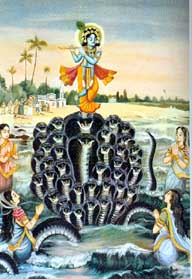 The banishment of Kaliya from the lake of the Yamuna has a most important spiritual significance. Those who have a purpose to create trouble among the pure devotees of Krishna by infecting their nature with their own malicious dispositions meet with a certain degree of initial success in their nefarious undertaking. This emboldens them to make a direct attack on Krishna Himself when He appears on the scene of their depraved activities in order to restore the living faith of His Own bonafide associates.

The following essay was printed in the May 1932 edition of The Harmonist, or Sree Sajjanatoshani

There is a beautiful lake of very sweet water in the Yamuna, which bears the name of Kaliya. This lake happened to be infested by a most venomous Serpent from whom the lake derives its name. On a certain day while the cowboys of Braja were out pasturing their calves on the wooded banks of the Yamuna they happened to feel thirsty and not knowing that the water of the lake had been poisoned by Kaliya drank of its water which resulted in their instantaneous death. On being apprised of their plight Krishna came to the spot and restored them to life.

Thereafter Krishna goes down into the lake with the intention of sporting in its water. This enraged the hideous monster who forthwith came out of the depths of the lake in the company of his adherents and fell upon Krishna coiling Him up in their great hoods for Kaliya was a thousand-hooded Serpent and his brood were equally formidable.

Thus attacked by Kaliya with his whole brood Krishna appeared to faint away under their murderous onslaught. On seeing Him apparently slain by His enemies the cowboys and all the assembled milkmen filled the air with their loud lamentations. But Krishna soon showed that He was quite safe and He forthwith climbed up the hoods of Kaliya and began to dance o his thousand heads. He danced in an infinite variety of the most marvelous of figures. The pressure of Krishna’s Feet crushed the towering pride of the myriad-hooded monster. Kaliya lowered his hoods and vomited blood. But the Dance of Krishna did not cease. Kaliya was found tottering towards death when his wives came out of the lake and with palms joined in prayer begged Krishna to spare the life of their husband. The prayers of the wives of Kaliya who had faith in Krishna moved the Son of Nanda to have mercy on Kaliya. Krishna now desisted from His terrific Dance on condition that Kaliya was to quit the lake at once and to betake himself to ho original home in the island of Ramanaka. Krishna gave him His assurance that Garuda would now do him no harm, as he would respect the print of His Feet on hoods of Kaliya. The water of the Kaliya Lake was now rendered immune from all poison and became as sweet as it was before the advent of Kaliya.

The taming of Kaliya is one of the Brindaban Pastimes of Boy-Krishna. Kaliya is the type of cunning and malice. He is the embodiment of unrelenting cruelty. There is no place for Kaliya in the happy realm of Braja. Deceit and cruelty are as poison to the artless loving nature of the denizens of Braja. It is quite conceivable for the confiding chums of Krishna not to entertain any suspicion regarding the malicious intention of cruel and deceitful persons whose purpose is to poison them against Krishna. They may even unwittingly fall into the counsel of such evil persons. But Krishna is sure to rescue His Own from the whiles of His enemy.

Nay Krishna has also a plan for curing the evil propensity of Kaliya himself. The process consists in making him feel the touches of His Dancing Feet. But Kaliya attempts to bear up against all curative chastisement. Instead of feeling the joy of supporting the Feet of Krishna o his nasty hoods the monster finds it impossible to bear his good fortune without undergoing the pangs of actual death. Even the loyal wives of Kaliya who desire the reformation of the monster and whose god wishes are at least forced to intercede by a prayer for his banishment from the realm of Braja. But the pride of Kaliya has received a mortal check.

The banishment of Kaliya from the lake of the Yamuna has a most important spiritual significance. Those who have a purpose to create trouble among the pure devotees of Krishna by infecting their nature with their own malicious dispositions meet with a certain degree of initial success in their nefarious undertaking. This emboldens them to make a direct attack on Krishna Himself when He appears on the scene of their depraved activities in order to restore the living faith of His Own bonafide associates.

Those who are not exceedingly clever can never be servants of Krishna. But the service of Krishna is also never available to those whose cunning is employed for depriving Krishna of the fullness of His enjoyment. Kaliya and those whoa re actuated by a naturally malicious disposition are also styled clever in the ordinary phraseology of the damned world. Such rascals may also have the impudence of taking their stand upon the texts of the Scriptures by using their cunning in the graceless attempt of depriving Krishna of the service of His Own. This kind of conduct may also pass undetected and may even be regarded as possessing the perfect skill of confidential service. But Krishna is sure to expose the real nature of the villainy just at the moment when it has been successful in misleading His best-beloved ones.

But these brutes are never allowed to associate with the servants of Krishna even after they forego their malice towards them. They are eternally debarred from the service of Krishna in Braja. But the touch of Krishna’s Feet makes a real difference between the recipient of His mercy and the other brutes. Kaliya is no longer regarded by Garuda as the enemy of Krishna. Kaliya is, therefore, allowed a place among the protected of Krishna. It does not follow that is a paying business to poison the hearts of His servants against Krishna, which is sure to be rewarded by the grant of His protection. Yes, this is so after the pride of the miscreant is thoroughly broken by being trod upon by Krishna Himself. His is thereby inspired with a most wholesome dread which effectively prevents him from trying to breed mischief among the bonafide devotees by owning an unwilling allegiance to Krishna and assuming the badge of His servitude by wearing on his head the print of His lotus Feet. The mercy shown to Kaliya is so obviously and disproportionately great in its magnitude in face of the extreme gravity of his offense that no rationalistic explanation can do justice to its full beneficent significance.

“In the eighth chapter of “Shri Krishna Samhita’, eighteen evils have been cited from 13th sloka to the end as obstacles to Vraja-bhajana. If breaking up of Yamalarjuna and vanity of Brahmin performing sacrifices are added, these will make up to 20 obstacles. These are all adverse tattvas to Vraja bhajana. The aspirant devoted to Nama bhajana, in the very beginning should loudly address All-Powerful Hari, praying always to drive out these evils. If he does, his heart will be purified. If the devotees cry out most humbly and piteously to Hari to drive out the trouble of those Asuras whom Krishna has destroyed from the domain of their heart, Hari Himself will remove those evils. But they will have to drive out themselves, with their own efforts the troubles of those Asuras whom Baladeva has killed. This is the mystery of Vraja-bhajana.

Dhenukasura is the evil of licentiousness, gain, honor and aspiration for selfish end. The aspirant will remove these evils with his own care and effort and obtaining mercy of Krishna. Loss of knowledge of swarupa of self, swarupa of Nama and relationship with swarupa of adorable Deity, ignorance and Avidya constitute Dhenukasura. With the greatest care and endeavor the aspirant will have to remove this evil and restore his self-knowledge. Lewdness for male or female, greed for wealth, effort for acquiring material prosperity, increasing one’s honor, fame and reputation etc., are very pernicious evils and knowing these as strong impediments to Nama-bhajana, the aspirant, with his best acre and effort will remove them. If humility becomes very deep and intense, Krishna will be merciful. In that case, feeling of Baladeva will arise in his mind and then these will be destroyed in no time. Then favorable and smooth cultivation of Bhajana will gradually improve. This process is naturally very secret and should be learnt from a good preceptor with clear mind.