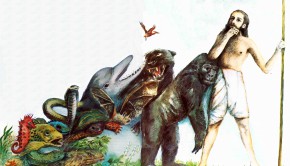 The defense of Charles Darwin's theory of evolution by biologists who suppress and ignore criticism does not inducing confidence in the scientific method.

He takes 10 so-called proofs of evolution from textbooks and shows where not one of them is in a fact a proof of anything, and several are actually frauds

The Philosophy of Darwin’s Theory of Evolution and Natural Selection

Darwin has no conception how evolution is taking place. He simply takes account of the body. A body never evolves. It is the soul that evolves