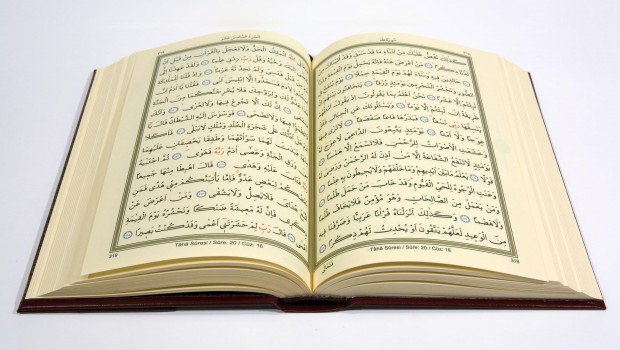 The following is from the Sri Caitanya Caritamrita, Madhya Lila, Vol.7. The Chapter is titled Lord Caitanya’s Visit to Sri Vrindavan. It clearly presents the Gaudiya Vaisnava conception in regards to the Koran and Islam. (Verses 159 thru 213)

While waiting, Sri Caitanya Mahaprabhu, understanding that the others were fatigued,took them all beneath a tree and sat down.

There were many cows grazing near that tree, and the Lord was very pleased to see them.

Suddenly a cowherd boy blew on his flute, and immediatley the Lord was struck with ecstatic love.

Filled with ecstatic love, the Lord fell unconscious to the ground. He foamed about the mouth and His breathing stopped.

While the Lord was unconscious, ten cavalry soldiers belonging to the Mohammedan Pathana military order rode up and dismounted.

Seeing the Lord unconscious, the soldiers thought,”This Sanyasi must have possessed a large quantity of gold.”

“These four rogues here must have taken away that sanyasi’s riches after killing Him by making him take the poison dhutura.”

Thinking this, the Pathana soldiers arrested the four persons and decided to kill them. because of this, the two Bengalis began to tremble.

The devotee Krsnadasa, who belonged to the Rajaputa race, was very fearless. The Sanodiya brahmana was also fearless, and he spoke very bravely. 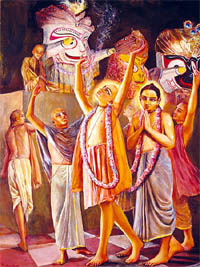 The Brahmana said,” You Pathana soldiers are all undr the protection of your King. Let us go to your commander and get his decision.”

“This Sanyasi is my Spiritual Master, and I am from Mathura. I am a brahmana and I know many people who are in the service of the Mohammedan king.”

“This sanyasi sometimes falls unconscious due to the influence of a disease. Please sit down here, and you will see that He will very soon regain consciousness and His normal condition.”

“Sit down here for a while and keep us all under arrest. When the Sanyasi regains His senses, you can question Him.Then, if you like, you can kill us all.”

The Pathana soldiers said,” You are all rogues. Two of you belong to the district of Mathura, and the other two, who are trembling, belong to Bengal.”

Rajaputa Krsnadasa said,” I have my home here, and I also have about 200 Turkish soldiers and about 100 cannons.”

“If I call loudly, they will come immediatley to kill you and plunder your horses and saddles.”

“The Bengali pilgrims are not rogues. You are rogues, for you want to kill the pilgrims and plunder them.”

Coming to His senses, the Lord very loudly began chanting the Holy Names, “HARI!HARI!”The Lord raised His arms upward and beagn to dance in ecstatic love.

When the Lord shouted very loudly in ecstatic love, it appeared to the Mohammedan soldiers that their hearts were struck by thunderbolts.

Seized by fear, all the Pathana soldiers immediatley released the four persons. Thus Sri Caitanya mahaprabhu did not see His personal associates under arrest.

At that time, Balabadra Bhattacarya went to Sri Caitanya and made Him sit down. Seeing the Mohammedan soldiers, the Lord regained His normal senses.

All the Mohammedan soldiers then came before the Lord, worshipped His lotus feet and said,”Here are four rogues.”

“These four rogues have made you take dhutura. Having made You mad, they have taken all your possesions.”

Sri Caitanya Mahaprabhu said,” These are not rogues. They are My associates. Being a Sanyasi beggar, I do not possess anything.”

“Due to epilepsy, I sometimes fall unconscious. Out of their mercy, these four men maintain Me.”

Among the Muslims was a grave person who was wearing a black dress. People called him a saintly person.

The heart of that saintly Muslim softened upon seeing Sri Caitanya. He wanted to talk to Him and establish impersonal Brahman on the basis of his own scripture, the Koran.

When that person established the impersonal (Formless) Brahman conception of the Absolute Truth on the basis of the Koran, Sri Caitanya refuted his argument.

Whatever arguments he put forward, the Lord refuted them all. Finally the person became stunned and could not speak.

Sri Caitanya Mahaprabhu said,” The Koran has certainly established impersonalism, but at the end it refutes that impersonalism and establishes the personal God.”

The Koran accepts the fact that ultimately there is only One God. He is full of opulence, and His bodily complexion is Blackish.”

(A.C.Bhaktivedanta Swami Prabhupada writes in his purport to this verse: The revealed scripture of the Mohammedans is the Koran. There is one Muslim sampradaya (school of thought) known as the Sufis. The Sufis accept impersonalism, believing in the oneness of the living entity with the Absolute Truth. Their supreme slogan is “analahak.” The Sufis Sampradaya was certainly derived from Adi Sankaracarya’s Advaitist impersonalism.)

“According to the Koran, the Lord has a supreme, blissful, transcendental body. He is the Absolute Truth, the all-pervading, omniscient and eternal being. He is the origin of everything.”

“Creation, maintainance and dissolution come from Him. He is the original shelter of all gross and subtle cosmic manifestations.”

“The Lord is the Supreme Truth worshipable by everyone. He is the cause of all causes. By engaging in His devotional service, the living entity is relieved from material existance.”

“No conditioned soul can get out of material bondage without serving the Supreme Personality of Godhead. Love at His lotus feet is the ultimate goal of life.”

(Purport by Prabhupada: According to the Muslim scripture, without evadat, offering prayers at a mosque or elsewhere 5 times daily (namaja), one cannot be successful in life. Sri Caitanya pointed out that in the revealed scripture of the Mohammedans, love of Godhead is the ultimate goal. Karma yoga and Jnana yoga are certainly described in the Koran, but ultimately the Koran states that the ultimate goal is the offering of prayers to the Supreme Person (evadat):)

“The happiness of liberation, whereby one merges into the Lord’s existance, cannot even be compared to a fragment of the transcendental bliss obtained by service unto the Lord’s lotus feet.”

“In the Koran there are descriptions of fruitive activity, speculative knowledge, mystic power and union with the Supreme, but ultimately everything is refuted as the Lord’s personal feature and His devotional service is established.”

“The scholars of the Koran are not very advanced in knowledge. Although there are many methods prescribed, they do not know that the ultimate conclusion should be considered the most powerful.”

“Seeing your own Koran and deliberating over what is written there, what is your conclusion?”

The Saintly Muslim replied,” All that You have said is true. This has certainly been written in the Koran, but our scholars can neither understand nor accept it.”

“Usually they describe the Lord’s impersonal aspect, but they hardly know that the Lord’s personal feature is worshipable. They are undoubtedly lacking this knowledge.”

“Since You are that very same Supreme Personality of Godhead Himself, please be merciful upon me. I am fallen and unfit.”

“I have studied the Koran very extensively, but from it I cannot conclusively decide what the ultimate goal of life is nor how I can approach it.”

“Now that I have seen You, my tongue is chanting the Hare Krsna Maha Mantra. The false prsetige I felt from being a learned scholar is now gone.”

Saying this, the saintly Muslim fell at the lotus feet of Sri Caitanya mahaprahu and requested Him to speak of the ultimate goal of life and the process by which it could be obtained.

Sri Caitanya Mahaprabhu said,”Please get up. You have chanted the holy name of Krsna; therefore the sinful reactions you have accrued for many millions of lives are now gone. You are now pure.”

In this way Sri Caitanya indirectly initiated the saintly Mohammedan by advising him to chant the holy name of Krsna. The Mohammedan’s name was changed to Ramadasa. There was also another Pathana Muslim whose name was Vijuli Khan.

(Purport by Prabhupada: After being initiated, the devotees of Krsna change their names. Whenever a person in the western world becomes interested in this Krsna conscious movement he is initiated by this process. In India we are falsely accused of converting mlecchas and yavanas into the Hindu religion. In India, there are many Mayavadi sanyasis known as jagad-guru, although they have hardly visited the whole world. Some are even not sufficiently educated, yet they make accusations against our movement and accuse us of destroying the principles of the Hindu religion by accepting Muslims and yavanas as Vaishnavas. Such people are simply envious. We are not spoiling the Hindu system of religion but are simply following in the footsteps of Sri Caitanya by travelling all over the world and accepting those who are interested in understanding Krsna as Krsnadasa or Ramadasa. By the process of a bona fide initiation, their names are changed.)

Vijuli Khan was very young, and he was the son of the king. All the other Mohammedans, Pathanas, headed by Ramadasa, were his servants.

Vijuli Khan also fell down at the lotus feet of Sri Caitanya Mahaprabhu, and the lord placed His foot on his head.

Bestowing His mercy upon them in this way, Sri Caitanya Mahaprabhu left. All the Pathana Mohammedans then became mendicants.

Later these very Pathanas became celebrated as the Pathana Vaisnavas.They toured all over the country and chanted the glorious activities of Sri Caitanya Mahaprabhu.

Vijuli Khan became a greatly advanced devotee, and his importance was celebrated at every holy place of pilgrimage.

In this way Lord Caitanya performed His pastimes. Coming to the western part of India, He bestowed good fortune upon the yavanas and mlecchas.

(Prabhupada’s Purport: The word yavana means “meat eater.” Anyone from a meat-eating community is called a yavana. One who does not strictly observe the Vedic regulative principles is called a mleccha.These words do not refer to any particular person. Even if a person is born in a brahmana, ksatriya, vaisya or sudra family, he is a mleccha or yavana if he does not strictly follow the regulative principle or if he eats meat.)

So as can be clearly seen, Krsna, Himself, as Sri Caitanya Mahaprabhu, did not reject the Koran or Islam, but rather encouraged the Muslims to recognize its authentic meaning. Prophet Mohammed recognized that the people of Arabia were hopelessly lost in rituals and idol worship and had forgotten that the goal of all worship is to please God. By removing the many diversions, he was able to focus his followers attention on the worship of the Supreme Godhead, who is the source of all the demigods and the goal of all sacrifice, charity, prayer and worship.

31 Responses to Shri Chaitanya And The Koran