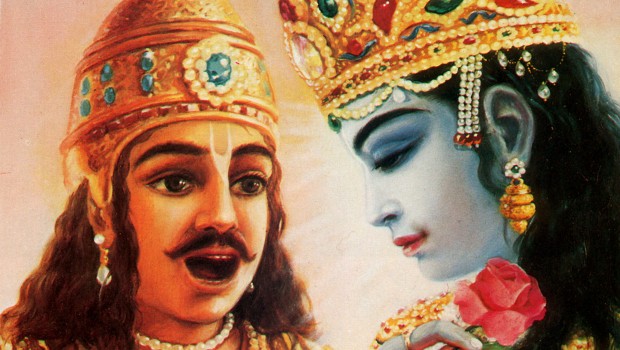 Not that the poor soldiers would fight and the leaders would remain in a secure place, no. The oldest man in the Kuru dynasty, the grandfather of Arjuna and Duryodhana. He was very old man, brahmacari, and he was taking the risk of fighting. This is ksatriya spirit.

Pradyumna: Translation: “Then Bhisma, the great valiant grandsire of the Kuru dynasty, the grandfather of the fighters, blew his conchshell very loudly like the sound of a lion, giving Duryodhana joy.”

Prabhupada:  So Duryodhana was doubting that “My grandfather, Bhisma, is more affectionately inclined to the other party. So he may not be lenient in fighting.” So in order to encourage Duryodhana, tasya sanjanayan harsam. “Don’t think that I am lenient. I am strong.” Immediately, to encourage him, he blew his conchshell. Nowadays they use bugle. Formerly the conchshells were used by the kings.

And not that in modern days the fighting takes place–the poor soldiers, they come to fight, and the leaders, they remain in safety place. It is not like that. All of them came out, ksatriya. Bhismadeva came, Duryodhana came, Arjuna came. And face to face, they had to fight. Not that the poor soldiers would fight and they would remain in a secure place, no. So tasya sanjanayan harsam kuru-vrddhah. Kuru-vrddha, the oldest man in the dynasty, Kuru dynasty, pitamaha, he’s the grandfather of Arjuna and Duryodhana. The Dhrtarastra’s elder uncle, his father’s elder brother. He was very old man, brahmacari, and in that old age also, he was taking the risk of fighting. This is ksatriya spirit. Not that only… Dhrtarastra was escaping. Not escaping, because he was physically incapable, blind, therefore he did not come in the battlefield. Otherwise even Bhismadeva, in such old age he also came. This is ksatriya spirit. When there is fight, there is no rest. And fight means “Either the other party should be killed or I shall be killed.” Not that without any decision the fighting will be stopped. No, that cannot be. When there is two parties, must be belligerent, one party. So decision is that “Either you kill me or I kill you.” Not that without killing… “Without being killed one of us, the fighting cannot be stopped.”

Just like Jarasandha was fighting with Bhima. During daytime the fighting was going on, and at night Bhima was a guest of Jarasandha. As guest is honored, respected, all the parties… But during daytime the fighting was going on. And this fighting went on for twenty-eight days. Still, there was no decision. Then Krsna gave hint, Bhimasena, that “Jarasandha has got a defect. He is joined, two bodies joined. So if you bifurcate him, then he will be killed.” So later on Bhimasena took that policy, and Jarasandha was killed.

So amongst the ksatriyas when there is fighting, unless one party is killed, the fighting cannot be stopped. This is the Battle of Kuruksetra, to see the history of the former kings and ksatriyas, how they were determined. This is one of the qualifications of ksatriya: not to go away from the fighting. When there is challenge of fighting, immediately a ksatriya would accept. That is ksatriya spirit. Isvara-bhavam ca, and ruling over others. And charitable. These are the symptoms of ksatriya.

Vaisya, they should engage themselves in agricultural production and giving protection to the cows, especially mentioned, go-raksya. Go-raksya, cow protection, is one of the items of state affairs. And now there is no cow protection. Poor cows, they deliver milk, and later on they become slaughtered. How much sinful the modern society is, and they still want peace and prosperity. That is not possible. The society must be divided–brahmana, ksatriya, vaisya, sudra–and they must execute their proper duty. And the vaisyas, they should give protection to the cows. And the sudras, they should work under the direction of the higher three divisions. In this way there will be nice management.

Then, as it is stated during the reign of Maharaja Yudhisthira, kamam vavarsa parjanyah. Then nature also will help. If you keep things all right, according to the direction, then nature also will help you. Nature will give you sufficient foodstuff. Vavarsa parjanyah, kamam. Whatever the necessities of life, it will be supplied by nature simply by proper pouring of water, vrsti. Actually, now the whole world is suffering for drought. There is scarcity of rain. And if the rain is stopped for one or two years more, there will be havoc. It is already there, havoc. In India there is famine, because they are more, mostly agriculturists. So there is famine. In other countries they have got industries. But India is not so industrially advanced. So without water, nothing can be produced.

Therefore during Maharaja Yudhisthira’s time, kamam vavarsa parjanyah. Yajnad bhavati parjanyah. If you want sufficient water, then you must perform yajna. These are the indications, direction of the Vedic wisdom. So at the present moment no other yajna is possible. The only yajna, sankirtana-yajna, is possible. Yajnaih sankirtana-prayair yajanti hi su-medhasah. So if this Krsna consciousness movement is taken seriously all over the world and they perform sankirtana-yajna, everything will be adjusted immediately. Everything. But these rascals will not take it. They will suffer. Otherwise all directions are there. People have to take the advantage of direction, perfect direction, without any mistake, and they will be happy. So we are trying to introduce this Krsna consciousness movement so that people may come to their senses, take advantage of it and be happy. Thank you very much. Hare Krsna. (end)

3 Responses to The Ksatriya Spirit — Leaders on the front lines of the Battlefield.