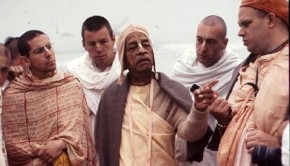 I am very glad to hear the book distribution is increasing. The more the books are distributed, the more the ignorance of the Age of Kali will be smashed

One young man was so grateful and excited to get Srila Prabhupada's Bhagavad-gita that he became overwhelmed. He could not believe that these original 5000 year old texts that hold secrets to all life, the mind and consciousness are still there, for him to read!

If every devotee took some of Prabhupada's books with them and simply offered the people they meet a book just think of how rapidly the world would change!

From Naradhama to Angel Instantly, This Is Srila Prabhupada’s Program

It’s so nice to witness Srila Prabhupada’s mercy in action! It often even amazes me and I have been distributing Srila Prabhupada’s books for many years seeing it happen every day, but it’s always like the first day, new and fresh

He said "I have seen you at thirty festivals and never got one of your books before, but today I will take all of your books" and he gave me about 25 bucks

I was now too overwhelmed with Srila Prabhupada’s transcendental presence to be mad. I forgot the speech about my being tricked into shaving up and joining