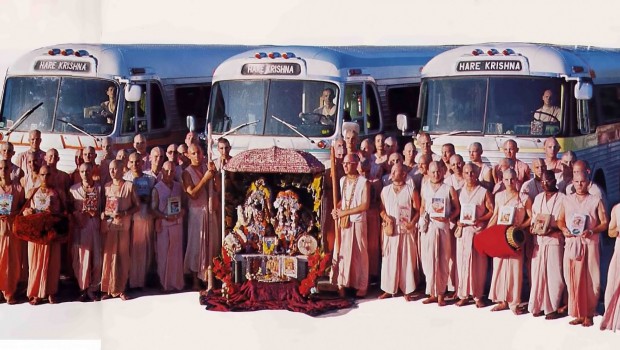 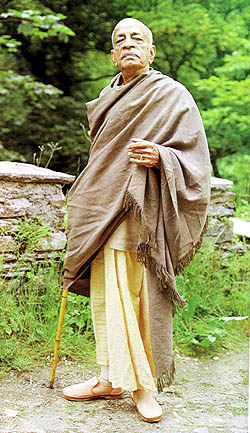 The chanting of Hare Krsna, known in India for thousands of years, is the great prayer for peace — for individual peace of mind and worldwide tranquility. By repeating these nonsectarian names of God the sincere chanter is gradually released from material illusions and elevated to the platform of pure spiritual consciousness, Krsna consciousness.

This prayer has been given to the other countries of the world by the spiritual master of the Hare Krsna movement, His Divine Grace A.C. Bhaktivedanta Swami Prabhupada. He has endowed his disciples with his spirit of traveling and enlightening the world in Krsna consciousness, and they in turn are using their Western technology to spread the chanting of Hare Krsna.

Pictured above are some of the traveling students of the Hare Krsna movement. They have converted three Greyhound buses into mobile temples to bring the message of Krsna consciousness to every town and village in the United States and Canada.

Their program consists of week-long festivals, featuring chanting (accompanied by Eastern instruments), delicious vegetarian feasts, and lectures from the books of their spiritual master. They have just completed a tour of colleges in Florida, Georgia, Texas, Arizona and California and are now preparing for a tour of Canada and the northern United States.

The Hare Krsna movement proposes to change the modern misconception that God should be kept locked in a church all week and then uncovered for an hour on Sunday. The truth is that serving the Supreme Lord is a 24-hour-a-day engagement, leading to eternal bliss.

As you read through the pages of BACK TO GODHEAD, you’ll find out how the members of the Hare Krsna movement live this truth and how they teach it all over the world.

4 Responses to What Can Turn a Greyhound Bus into a Temple?

Whatever you have realized, you can say without seeing the book? →