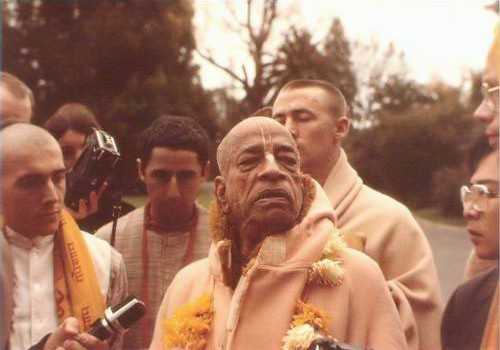 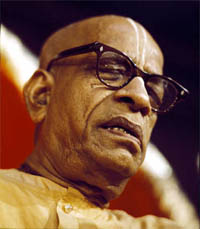 Serving Srila Prabhupada personally in Bombay, Hrishikesh and Vrindavan were the best days of my life. I had entered India on a three month tourist visa. I had applied for an extension but since I was already granted one and that was the limit, I was denied the extension. I considered just staying past my expiration date so I could remain with His Divine Grace because he said that he would

I had packed all of my belongings and loaded them onto a horse drawn cart for my trip to the Mathura train station. I went to offer my obeisance’s to Tamal Krishna Maharaja in his office before leaving. He told me I couldn’t leave without telling Srila Prabhupada. I replied that Srila Prabhupada knows everything anyway and I didn t want to bother him. Tamal K.G. said to wait and he entered Srila Prabhupada’s room. A moment later he stuck his head out of the door and told me to come in. Now I was getting really nervous. This would turn out to be the last time I would see Srila Prabhupada before his divine departure for Goloka Vrindavan.

Upon entering Srila Prabhupada’s room I offered my full dandavat obeisances. Tamal K.G. said, “Here’s Gauridasa Pandita, Srila Prabhupada; he has to go back to America now because his visa is expiring and the government wouldn’t give him an extension.; Srila Prabhupada said, “Just see. I just train him up and the rascal government takes him away!” He was sitting behind his desk and he looked at me with deep compassion and he melted my stone-like heart. Then he said, “Thank you very much for all of your service, you’ve been very sincere. You are welcome to be my personal servant anytime. So you go worship Radha Damodara and be happy.”

I was ecstatic at the mercy of Srila Prabhupada. Not only did he acknowledge me; but he said I could return to be his personal servant anytime. I had new hope even though I was hopeless. “Thank you, Srila Prabhupada” I sais as I offered my dandavats again and slowly backed out of his room, not wanting to take my eyes off of Srila Prabhupada even for a second. I paused at the door one last time and Srila Prabhupada nodded his head encouraging me on. Then he looked back to his desk and continued to translate. Service conquers sentiment.

Tamal Krsna Maharaja writes a slightly different version of this event in his TKG s Diary wherein he says, “Today, Gauri dasa Pandita left with Srila Prabhupada s approval. His visa had expired, and he was going to serve Radha and Damodara in New Varsana. Srila Prabhupada was very grateful for the many months of service he personally rendered: ‘I am very pleased with you. You have served so nicely. Very sincerely. See this Indian government. I have taken so much time to train you and now you have to leave. Be happy’. Gauri dasa, who was simply the servant of the servants of Prabhupada, was thus blessed.”

It s funny that the only time TKG mentions me in his diary was the day I left on July 15, 1977. I thought he would of at least wrote about the time I got electrocuted! Anyway, I must thank him for allowing me to serve Srila Prabhupada and taking me before him to receive His blessing before I had to leave India. TKG also gave me a donation which was unexpected and appreciated.

I boarded the horse cart sitting facing the rear and began the journey from Sri Vrindavan Dhama back to America. The trip seemed to last forever as I lamenting having to leave Srila Prabhupada’s personal service. I had become more and more attached to him every day and I became overwhelmed with the thoughts of his mercy and compassion on me and couldn’t help crying most of the way to the Mathura Station.

I arrived at the Gita Nagari farm where Sri Sri Radha Damodara were and became co-head pujari with a devotee named Sasthi Prabhu. We became a good team. When we got a letter from Upendra saying that we should fast to help Srila Prabhupada get better we fasted for three days straight, then took prasadam once, then fasted again for three days and ate once and continued in this way the whole time we were at Gita Nagari.

Of the whole four months I served Srila Prabhupada, I only talked to him shortly a few times. This was because right in the beginning of my service in Bombay, Srila Prabhupada said that the proper etiquette for the servant was to not talk to the spiritual master unless the spiritual master spoke first. He complained about some of the Indian life members who were too talkative and familiar with him at times. So from then on I didn’t say much, but listened as much as possible. Srila Prabhupada knows the hearts of all of his followers.

Later we got the news that Srila Prabhupada had changed his plans and decided to return to Vrindavan and wouldn’t be coming to Gita-Nagari. I wrote Tamal K.G. and got his permission to return to resume my service to Srila Prabhupada. I had to train a new pujari before leaving Gita-Nagari first though. He turned out to be Radha Damodara Dasa! It took two weeks. The day he took over completely I chanted my japa outside the curtains circumambulating Tulasi Devi and the Vyasasana. During that time we got a call from India to inform us that Srila Prabhupada had indeed made his divine departure for Krsna Loka. I sensed something special was going on during my japa, and it was. Srila Prabhupada went back to Godhead! Actually I didn’t want to see that particular pastime of his leaving us. I thank Krsna for saving me from that. I know that Srila Prabhupada is still present in his instructions and if we follow those instructions we will meet him again very soon, personally. I will be ready to fan him with the chamara and do the needful as far as possible. And with Krsna everything is possible!

He reasons ill,
Who says that Vaisnavas die
When thou art living still in sound
The Vaisnava dies to live!
And living tries
To spread the Holy Name around.

One Response to Leaving Vrindavan (July15th 1977)