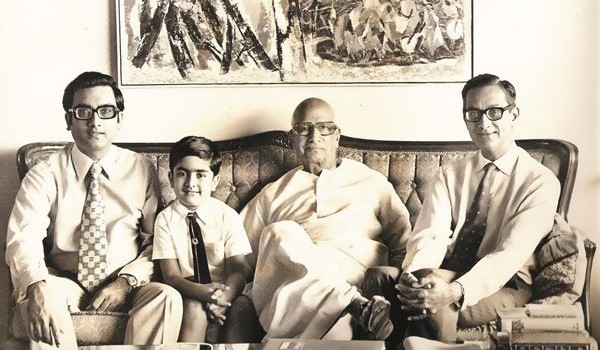 The Birla family had traditionally been the richest in India. Srila Prabhupada called them “the best organized family in the world,” and said, “Nobody can measure their wealth.”

In 1971 one of the devotees in Calcutta made an appointment for Srila Prabhupada to meet Mr. L.N. Birla, the first son of the senior Birla. G.D. When the devotees informed Srila Prabhupada about the appointment, but I want you to go.” I inquired why. “In Bombay recently I asked some big men for help but they refused. If he refuses also, it won’t be good for him and it won’t be good for me.” I replied, “But what if he refuses me?” “Oh, you are just a young boy! That doesn’t matter.”

Mr. Birla received us cordially. We showed him Srila Prabhupada’s books. Immediately he asked, “How much do I pay for these books?” I thought,” He can’t just buy the books. He has to do more.” So I replied, “We don’t actually sell the books. We only give them to life members.” “What do I have to do to become a life member?” I explained and gave him the form. He called his secretary, issued the check and enrolled as a life member. Then I came to the real point – Mayapur. But he replied, “Presently we are building hospitals.” And that was the end of the meeting. Back at the temple Srila Prabhupada asked for the report. I thought I had been clever enough not to allow Mr. Birla to just buy the books, but when Srila Prabhupada heard the story he said, “You did wrong. When he asked how much the books cost, you should have replied, ‘These are our presentation to you. Now we are building one temple in Mayapur. Kindly help us.”

Years later in Bombay I got an appointment with Mr. G.D.Birla, L.N. Birla’s father. My assistant Puridasa and I took the special lift to the top floor of the Birla office building. The floor was laid with spectacular swirling green marble and the walls were lined with mirrors so everything looked like marble. One could not distinguish between marble and glass, horizontal and vertical. It was bewildering. Mr. Birla’s secretaries were expecting us. A few minutes later Mr. Birla came in.

Mr. Birla began by confessing that for many years he had come prejudice against us. “I don’t know why. I just had some prejudice. But now it is gone.” Suddenly an important overseas call came and Mr.Birla left the room. I started to think, “What to do now? What to do?” Then I remembered I has some sets of Srimad-Bhagavatam and Caitanya-Caritamrta in the back of the car.

It was the third day of December and we had just begun the book distribution marathon. For two days I had gone out on the street to distribute books and was relishing the nectar of sankirtana. But I also began to consider that with so much effort I had distributed one or two hundred small books, but with much less effort I could meet a big man and with his donation distribute so many more books. Finally I concluded, “Anyway, it’s the marathon, so let me meet some big men with sets.” Thus the trunk of the car was filled with sets of Prabhupada’s books. “Puridasa! Quick! Run and bring the sets of books. Don’t worry how many boxes there are. The Birla people will help you.” (In those days the Bhagavatam was thirty volumes and Caitanya-Caritamrta seventeen.) I was anxiously waiting for Purdasa, fearing Mr.Birla might return first. Finally puridasa came rushing with five large cartons of books – just moments before Mr.Birla.

As soon as Mr.Birla took his place I started showing him the books. And he was perusing them and appreciating. After some time he said, “How much do I owe you for these books?” His words suddenly called to mind my previous meeting with the other Birla – and Srila Prabhupada’s instructions. “Oh, no! These books are our presentation to you. We can’t take anything for them.” Mr.Birla countered, “These are such beautiful books. I can’t take them for free. I must pay you.” “Oh, no! These are our presentations to you. We can’t take money for them.” He was insisting. And me, I was still relatively young and inexperienced. How could I argue with Mr.Birla? But still I stuck to my point. “No. In our mind we have already given these books to you as our gift. We cannot take payment for them under any circumstance.” He relented – but still he was not satisfied. So I added, “But we are building one gurukula school in Juhu. If you like you may help us. “I explained the project and showed him the plans and budget. He said, “All right, you leave these with me and we’ll see what we can do.”

Two days later Mr.Birla’s secretary phoned, “Mr.Birla would like to meet you. He has something for you.” We were pleased to return to his office to accept his kind and generous donation.

– From the “Watering the Seed” by HH Giriraja Swami