Veda means knowledge. There are two kinds of knowledge: mundane and transcendental. The Vedas are transcendental because they come from before the creation 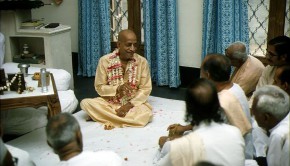 For thousands of years devotees of Krishna have traveled to Jagannatha Puri to take part in the celebration called Rathayatra, The Festival of the Chariots.

Jayananda is loved by all, old devotees and young devotees. The beautiful cover and 12 photos and wonderful stories of Jayananda inside.