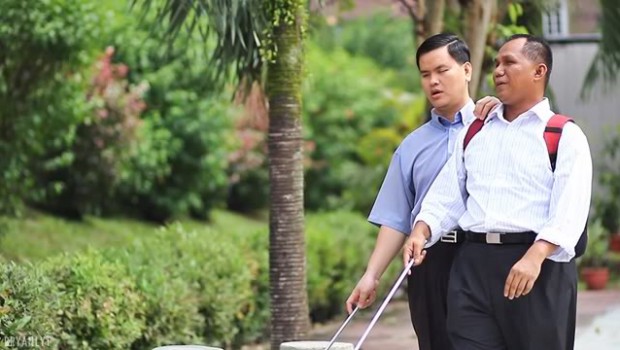 A blind man was once trying to negotiate the path to his father-in-law’s house with the help of only his walking stick. In a field nearby he heard a cowherd boy humming a tune to himself. The blind man hailed the boy and asked, Kindly lead me to the house of my father-in-law. It is nearby, but I can’t find the way myself.

The cowherd boy replied, “I’m very sorry, but if I leave this field to go with you, what will become of this herd of cows I’m tending here? There’s one thing I can do for you–here, take the tail of this cow I’m handing you now. Her calf is at your father-in-law’s house, so she will lead you there out of motherly affection for her young one.”

But the cow became alarmed at the grip of the blind man on her tail and tried everything to shake him off. She dragged him over rough ground and through thorny brambles, and often gave him hard kicks with her hind legs. By the time he arrived at his father-in-laws house, the blind man’s clothes had been ripped completely off of his body, and he was covered with scratches, bruises, blood and filth. As the house servants looked out the door to see who had come, he staggered forward, groaning in pain. They could not recognize him, and, taking him to be a cow rustler, gave him a sound beating and drove him from the premises.

This story illustrates the perils of accepting a bogus guru as one’s guide in spiritual life.

3 Responses to The Blind Man and the Cow’s Tail