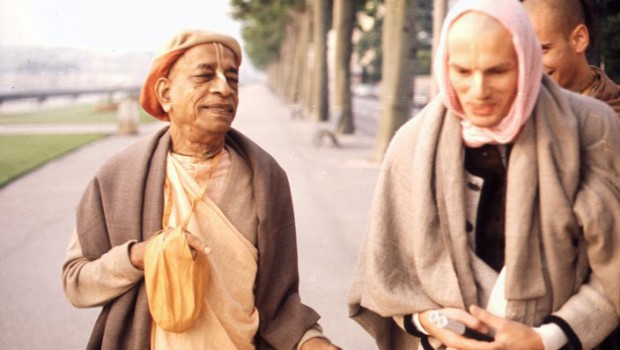 No One–Not Even Darwin–Can Be Independent [Prabhupada Speaks Out]

This whole Darwinian theory is false. But people are giving it so much stress. First of all, no one–not even Darwin–can be independent. For instance, Darwin died. So he was under the control of something higher. No man wants to die, but he is forced to die. Is it not? Then where is his independence?

Here we continue an exchange that occurred in Perth, Australia, on May 9, 1975, between His Divine Grace A.C. Bhaktivedanta Swami Prabhupada and Carol Cameron, then a doctoral candidate in anthropology.

Carol: Your Divine Grace, is the intellect helpful in knowing God?

Srila Prabhupada: Yes. Unless you have got the necessary intellect, then you are no better than the animals. The animals have no intellect for understanding God, but the human being has got that intellect. That is the distinction between animal and human being.

But the human being has a special intellect, more developed than the animals’. He can understand what he is, what God is, what this cosmic manifestation is, and what the aim of life is–how we should conduct our lives. These things are prerogatives for the human being. The animals have no such prerogative.

Now, if we do not utilize these special intellectual facilities, then we remain animals. We do not make any spiritual advancement. So at the present moment, we are simply trying to improve our access to the material necessities of life–eating, sleeping, mating, and defending. We are thinking, “The dog is eating on the floor. If we can eat on a table, using chairs and nice dishes, that is advancement of civilization.”

We are thinking like that. The dog is sleeping outdoors, but if we sleep in a very nice apartment, lavishly decorated, that is advancement of civilization. The dog is having sexual intercourse on the street, without any shame–and we are also coming to that point–but for the time being, if we have sexual intercourse in an apartment, in the name of love and so on, that is advancement. The dog is defending with his jaws and nails and teeth; we are defending with nuclear bombs; therefore, we are advanced.

But we have forgotten that the human being has got this special intellect to understand God. That understanding we are not pursuing. For example, you are going to be a doctor in anthropology. Is it not?

Srila Prabhupada: Where is the sense of God there?

Carol: I do it only for a living. The other side of me is something else.

Srila Prabhupada: No, I mean to say that anthropology is a big scientific department. Where is the understanding of God there?

Carol: Right. I find it difficult to reconcile the love of God with actually doing something like this study of anthropology.

Srila Prabhupada: Then why are you wasting your time speculating on anthropology?

Srila Prabhupada: If you cannot adjust yourself to this anthropology business, why are you wasting your time? Anthropology is a false science. There is no meaning.

Carol: I’m waiting to be led into something which is good.

Srila Prabhupada: The whole Darwinian theory is false. It has no sound basis. Darwin himself admits it is just a theory. Theory is not science.

You can speculate, constructing a castle in the air. That is not a very good thing. You should present something which will benefit the people, something practical. That is science.

Carol: Do you think it is possible for people to live in, say, an educational framework?

Srila Prabhupada: Education–if it is not for the benefit of the people–then what is the use of such education? That is not a good education. Education means something which will benefit the mass of people. That is education. To enlighten them to do something better–that is education.

Now, this whole Darwinian theory is false. But people are giving it so much stress. First of all, no one–not even Darwin–can be independent. For instance, Darwin died. So he was under the control of something higher. No man wants to die, but he is forced to die. Is it not? Then where is his independence?

Carol: That is the illusion.

Carol: The only way to remove this darkness is through love. Is this what you are saying?

Srila Prabhupada: Love is far away. First of all, you become educated.

Carol: How? In what way?

Srila Prabhupada: Education means right knowledge. Right knowledge. For instance, everyone wants to live. Nobody wants to die. So the inquiry should be, “I do not wish to die. Why is death forced upon me? What is that force–what is the nature of that force?”

On the other hand, if I simply resign myself–“Yes, some kind of force is there”–then whereis my knowledge?

Carol: I tend to approach from the other side and ask, “Who am I?” and “What is this thing that I call myself?”

Srila Prabhupada: But first, everyone has this basic problem. “I don’t want these miserable conditions, but they are forced upon me.” For instance, you are now a young girl. You do not like the idea of becoming an old woman. But you will have to become an old woman.

Srila Prabhupada: Nature will force you. After forty years of age, you must become old, and you cannot remain so beautiful. This is forced. No one wants this. No woman wants that “I shall not look so beautiful, and my flesh shall be flabby, with no more luster.” I don’t want all these things. Why are they forced?

Carol: Suffering and pain lead people to God, don’t they?

Srila Prabhupada: Yes. That is the law. But we are so dull-headed that we do not inquire. That is my statement–that you should inquire, “Who has made this law? Who is forcing these things upon me?” After you make this inquiry, then you can inquire about God’s actual identity and your actual identity. But first of all, you must be aware of your situation–that these miserable conditions are being forced upon you.

For instance, a dog cannot understand that he’s on a chain. He’s leading a life most dependent, most miserable. And yet he is jolly. He is jumping here and there. That is a dog’s life. If the master wants to kill him, he cannot do anything. But he is very jolly. Sometimes he even jumps.

Carol: Your Divine Grace, is it possible to carry out this inquiry while you’re engaged in ordinary daily activities?

Srila Prabhupada: Yes, certainly. You can become spiritually realized in any walk of life, regardless of your daily activities.

The thing is, this is the real inquiry: “Why I am put into these conditions which I do not like? Who is forcing them upon me? Wherefrom has my life begun? What is the ultimate goal of my life?” These things should be asked. That is the proper inquiry of the human being.

Without getting answers to these questions, we cannot solve the very real problems of birth, death, old age, and disease. Instead, like Darwin, we are forced to theorize something utopian. What is the use of such so-called knowledge?