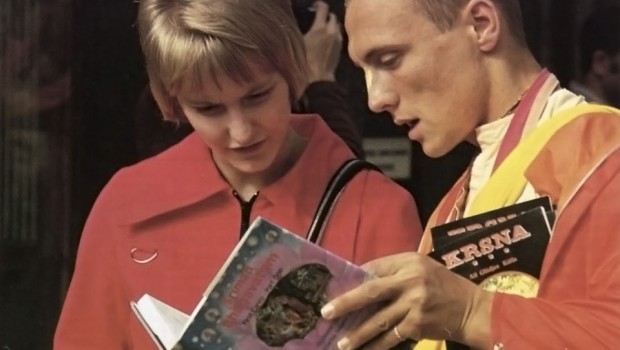 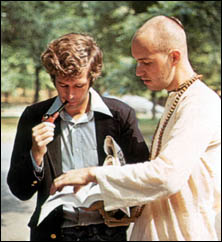 Defying the serious recession that slowed the world economy in 1975, ISKCON devotees increased their sale of Krsna conscious literature last year by more than one third over 1974. The grand total topped nine million books and magazines, not including the Spanish, German, French and Japanese literature sold abroad. Of two million books distributed half a million were fully illustrated 300-400 page volumes and the seven million Back To Godhead magazines

Why the vast increase? “It’s all due to the dedication of the devotees as well as a growing receptivity of the public to Krishna consciousness,” explained Ramesvara das, a trustee of the Bhaktivedanta Book Trust, which publishes the books of His Divine Grace A.C. Bhaktivedanta Swami Prabhupada and Back to Godhead magazine.

With renewed commitment to fulfil Srila Prabhupada’s request to “distribute my books profusely,” the members of ISKCON spent more time and energy than ever before doing just that. In the process they showed impressive determination and steadfast faith. For example the hundred-man Radha Damodara travelling party crisscrossed North America in six new Greyhound-type busses and ten vans, breaking sales records and simultaneously putting on full-scale lectures and festival programs on dozens of campuses.

The public’s increasing receptivity to Krishna conscious literature is also a key factor in the remarkable sales record. In a recent letter to His Holiness Tamal Krsna Gosvami, the leader of the Radha Damodara travelling party, Srila Prabhupada observed, “There is no other instance in history where religious books were sold with such enthusiasm and success.”