"This book will tel..." /> Peace on Earth or the Earth in Pieces? | Krishna.org
Book Distribution 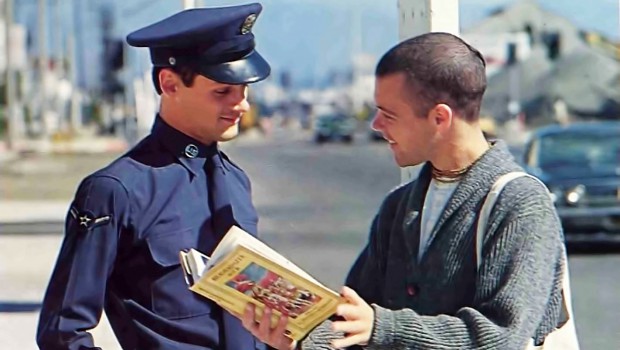 Peace on Earth or the Earth in Pieces? 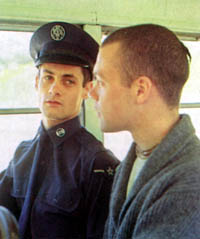 “This book will tell you about real peace on earth,” I promised. “All right, sir, I’ll give it a look.” The young airman smiled as he tucked the volume under his arm. “Have a nice Christmas,” I added. “Hare Krsna.”

I’d been distributing my spiritual master’s books to San Antonio servicemen since nine o’clock that morning. Now I had to catch the bus from the base back into the city to join the other members of my group. It was late afternoon, and the mid-December air was cold and still. With numbed fingers I fumbled for the exact fare (thirty-five cents) and shuffled up the narrow metal steps onto the bus, along with half a dozen young airmen. I tried to seem casual about slipping into the only available seat. Whew! It had been a busy day. I glanced at the airman beside me. He squinted back from beneath a blue service cap pulled low over his brow.

“Fine, sir.” Then relaxing his newly acquired military formality, he pushed his cap up. We recognized each other and smiled. On his lap he held the book I had handed him back at the bus stop: BHAGAVAD-GITA AS IT IS, by His Divine Grace A.C. Bhaktivedanta Swami Prabhupada.

We shook hands. “Mine’s Steve,” he said. “Where are you headed?”

“I’m going downtown to meet some friends at the Alamo. I’m not quite sure which stop….”

“Easy. I’ll let you know when we get there.” He paused. “You religious groups talk a lot about peace this time of the year, huh?”

We both leaned back as the bus pulled away from the curb.

“The book I gave you — the Bhagavad-gita — contains the scientific formula for peace on earth. That’s why I asked you to read it.”

“I know, but this is an old scripture from India. I’m the type that likes to be involved with what’s happening in the world today. You know what I mean? Practical things, like SALT talks, disarmament, the UN. Do Hare Krsnas believe in that?”

“Believe in what — peace through disarmament? But that’s not really practical.” Steve turned in his seat to face me. “Even if we got rid of every nuclear bomb and warhead in the world,” I said, “that wouldn’t solve the real problem. If we leave God out of our thinking, we’ll just become more and more greedy and envious, and finally we’ll start a third world war. America and Russia might sign an arms limitation treaty, but everyone knows that’s a joke. The way it is now, both sides just try to get the advantage by finding loopholes in the treaty, right? And then one side comes up with a neutron bomb or something and swears that they haven’t exactly broken the treaty. So even if, by some miracle, they did ban the bomb, what good would that do?”

“So you’re a pessimist,” he concluded. “You don’t believe in disarmament or peace.”

“A pessimist?” I thought about it. “No, I’m not a pessimist. I believe in peace, all right, but I know we’ll never have peace as long as we hold on to our greed and envy. It’s an impure mentality. That’s what these books I distribute say.”

“You said ‘impure mentality’?” “Yes. The mentality of exploiting God’s world as if it were ours and God didn’t even exist — that’s impure, don’t you think?”

“Sure, but don’t you think it’s possible to negotiate peace? After all, most of our men in Washington do have the people’s interest at heart.”

“America’s leaders? That reminds me of a story I once heard. There were these two brothers who were always getting into trouble. One day they started a fire in their basement, but they were able to put it out — after it had done a lot of damage to the house. Right after that they said, ‘Maybe Mom and Dad will be pleased with us for putting out the fire.’ “

With his thumb and index finger Steve was tracing the crease in his woolen military trousers. “So, what are you trying to say?”

“That our national leaders are just like those two brothers. But instead of one little fire, it’s a worldwide nuclear threat. Now they’re boasting about their ‘non-proliferation treaty’ and promising disarmament — and we’re supposed to be pleased and keep them in office. But they’re the ones who led us into this mess in the first place. They lit the fire. So whether they blow up the world or sign a new peace treaty, these guys are real rascals.”

He looked down, and in the shifting light he began leafing through the gita in his lap. We sat thoughtfully, sharing the silence for a few moments. He turned to the portrait of Srila Prabhupada. “I never have talked with you people before. I guess I’m just curious.” He frowned. “This is like your Bible, isn’t it? All your beliefs are in this book?”

“You have the key to world peace right there in your hands.” I suddenly realized that my words must have sounded crazy to him. Sure they were true, but why should this airman think that some book that had just dropped out of the blue at a bus stop could do more for world peace than SALT talks or the UN? As I searched for a way to explain, Steve gave me a clue.

“Hmmm, I see. You’re saying you believe in world peace, but not the way they’re trying for it.”

“Yes. And that’s exactly where this book comes in. The Bhagavad-gita says you can’t have peace on earth until you understand that everything belongs to God. You’ll just fight over who gets which part of God’s earth.”

“You mean like the conflicts in the Middle East?”

“Yes, the Middle East. Or even the middle of San Antonio. The whole world belongs to God. You’ll understand this when you read the Bhagavad-gita. Krsna, the Supreme Lord, is the real proprietor of everything in the creation. But when you forget Krsna, you have chaos and war.”

“Sure it is, but it’s true. Look at Russia and America — they’re always competing for land, oil, money, influence. But neither side sees that the real owner is God. So you have dissension and the nuclear arms race.”

He looked down at the Bhagavad-gita on his lap. The bus stopped rather roughly — bad driver — and the book slid forward, closing shut as he caught it between his knees. “I don’t know,” he said, “it seems impractical to me. If everything is God’s … if we’re all stealing … how could you tolerate living in a world where you can’t own anything? If everything is God’s … then what about us? What do we get? See what I’m talking about?”

“Yes, I see your point.” I watched him lean back and open the Gita again on his lap. “Everyone gets his quota,” I said. “How many children were there in your family?”

“Seven. I have three brothers and three sisters.”

“And every child was provided for, wasn’t he? Your father earned all the money, paid all the bills, and owned all the property in the family. But you all got your necessities. Sometimes if the kids would get into little fights over whose toy or whose piece of candy was whose, your father would step in and settle things: ‘This is yours, this is his, this is hers — now don’t fight anymore.’ So it’s like that on a larger scale as well. Krsna is everyone’s father, and everything in the universe is His. But since we’re all Krsna’s children. He gives each of us the right to enjoy our own little portion of His property.”

“That’s the way my spiritual master explained it to me. If the leaders of the world’s nations would just admit that Lord Krsna is the rightful owner of everything, and if they would just see themselves as His children and try to follow His instructions in the Bhagavad-gita, then we’d have peace all over the world.”

“Yes, exactly. Everyone’s got his quota: ‘This is your America, this is your Russia — now don’t fight anymore.’ “

“But the Russians don’t even believe in God — not officially, anyway. But a lot of Americans read the Bible and pray. You know, America — ‘In God We Trust.’ “

“Sure, we stamp ‘In God We Trust’ on the currency and put the Bible on display in the White House.”

“But when you get right down to it, most Americans really put their trust in exploiting the property of God. They just want to improve the economy — with or without God. Isn’t it a fact? It’s the American way of life: raise our standard of living, increase our gross national product, raise our average yearly income — and then build bigger and better bombs to protect all the loot. So now Americans are worried about crime, energy, morals, drought, nuclear weapons. But if we actually trusted in God, then we’d be at peace.”

“So how can you Hare Krsnas really bring peace to the world?”

“Like I was saying, the key to world peace is in these books, and Srila Prabhupada’s disciples are distributing them all over the world. The real enemy of peace is ignorance of Krsna. By distributing these books we’re spreading Krsna consciousness, the scientific formula for peace. And as soon as the world’s leaders start reading Srila Prabhupada’s Bhagavad-gita and taking it to heart, then you’ll know that the enemy of peace has been defeated — then we can have peace on earth.”

“But you’ve got to admit the odds are really against you.” “I’m not saying I have any special power to bring world peace, Steve. But these books are powerful transcendental sound. My spiritual master, Srila Prabhupada, says they’re like a moon of transcendental knowledge. You know how the moon appears small at first — just a sliver in the sky — but it grows bigger every night until you see a beautiful full moon. So Srila Prabhupada says the light of transcendental knowledge will spread more and more as we distribute these spiritual books. Gradually the darkness of ignorance — and that’s the real enemy of peace — will be destroyed, and then we can really have peace on earth.”

“Sounds mystical,” he mused. He had been leaning back, but suddenly he sat up and looked out the window. “The Alamo. I completely forgot.” He reached up and pulled the cord to buzz the driver. An abrupt end to our talk, I thought.

“Okay, here’s where I get off,” I said. “I really enjoyed talking with you. Hare Krsna.”

I stood up to leave and Steve smiled. “Hare Krsna.” I walked up the aisle to the metal railing at the front of the bus. Then I remembered.

“Oh, Steve, here’s our card. Why don’t you keep in touch.” I reached across two empty seats with the card in my outstretched hand, and he stood and leaned forward, holding the open Gita flat against his chest.

“Thanks, I think I’ll do that.” He took the card from my hand. I looked out from the open bus doorway and saw my friends in front of the Alamo, still distributing Srila Prabhupada’s books. And as I stepped out I saw that night was coming but so was the moon.

One Response to Peace on Earth or the Earth in Pieces?