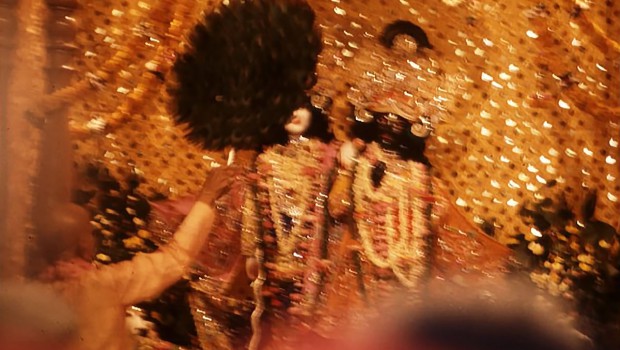 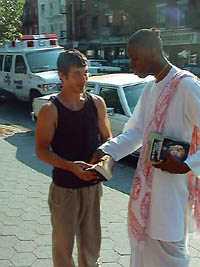 Steven Tyler, lead singer with the big rock band Aerosmith had just walked past us. He stopped a few shops on from us to buy some candy for his kids. As he was waiting for his candy I nipped over and gave him a book. He seemed to appreciate it.

I was on 8th St. today speaking to an Indian storeowner. When a guy who worked in the man’s store came over to tell us that Steven Tyler, lead singer with the big rock band Aerosmith had just walked past us. He stopped a few shops on from us to buy some candy for his kids. As he was waiting for his candy I nipped over and gave him a book. He seemed to appreciate it. He moved on but then returned immediately for more candy so I approached him again and gave him our card and invited him to the temple. He said that he goes to the temple in LA and knows the guy who runs the place there.

A few minutes later a small puppy type boy came by me wearing a T shirt with the words SECURITY on the front & back and introduced himself as a freelance security guard. Asking me if I needed protection, I looked at him in mild disbelief. (He looked like he spends more time in his bed than in the gym). So I kindly explained that I did not need his services (even though he was offering them free for the day since he was still on training). So we bantered back and forth, then I told him that Aerosmith was walking around here today and he could use his service. He immediately ceased the discussion when I told him this and then introduced himself as from Alltrue.com a sort of’ Candid Camera’ on the internet. Sure enough, I turned and there was a guy with a movie camera about 25 yards away who filmed our conversation. So he said that he thought that this was real funny and if I signed a paper he would put it on his show on the net. So I duly signed and they told me I would be on on October 2nd. I found this last incident significant because it was only due to my being dressed in a dhoti and with a shaved head that he approached me and gave the opportunity for many people to see a devotee distributing books. This is the value of not being daunted and distributing books openly dressed as a devotee.

I was walking along side Washington Square Park towards the University. Stopping people as I walked and showing them the books. I noticed one young girl with an almost new born baby trying to avoid me, but I thought to stop her anyway since maybe she might take something. She was a nice person and was taking some time looking at the books but she just could not make up her mind as to which book to take, either ‘The Perfection of Yoga‘ or ‘Beyond Birth and Death‘. Then much to OUR surprise her baby (which was very tiny and being carried in some kind of pouch arrangement at the mothers front just below her neck) who appeared to be sleeping, sprung to life and reached out with determination and grabbed a completely different book – the Science of Self Realization! His hand was so small that he could barely get a hold of the book. Yet his intention was remarkably obvious, though he was physically incapable of fulfilling his desire. He even (momentarily) looked really distressed at not being able to fully grasp the book due to the smallness of his hand. So I mentioned that it looks as though your baby has decided for you what book to take. Much to my amazement, she was also surprised at what had just happened. (She was French, not quite fully fluent in English) So surprised that it took her quite a few moments to say anything(she seemed to have forgotten her English). Then she managed to remember and she asked me how much did I want for the book. So I humbly suggested only $10. She took the book and gave me $15, walked away, totally convinced that there must be something really special about this book that made her tiny baby attempt a determined grab at it from the depth of his slumbers. (After she decided to take the book he appeared to be ‘sleeping’ again) Do we need anymore proof that the supersoul is guiding the wanderings of all the living entities!

One Response to Aerosmith Gets A Book