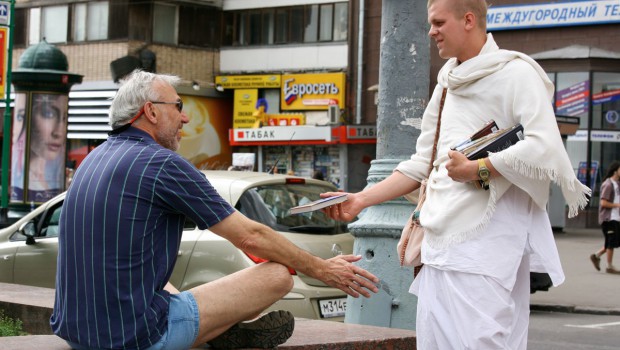 I had recently turned 50. Srila Prabhupada would say that after reaching 50 one should go to the forest, or vana. I strongly believe that in our tradition he really means the pusta-vibhaga (book distribution) van.

It was 5 a.m. The van groaned and creaked through the darkness up Krishna road.

“This van’s never had so many freakin’ books in it before; this is gonna be big! I just hope the chassis holds up. I know you’re gonna like this; it’s gonna be big!”

For years I’d been begging Bhakta Philip to drag me out on book distribution, and now it was finally working out. He was taking me to a huge music festival. “It’s the biggest, sweetest, coolest way to get back into book distribution. You’ll meet cool people and sell books. They really like Srila Prabhupada’s books there.”

I had recently turned 50. Srila Prabhupada would say that after reaching 50 one should go to the forest, or vana. I strongly believe that in our tradition he really means the pusta-vibhaga (book distribution) van.The next day I was surrounded by tents, vans, hippies and a dozen other traveling brahmacaris focused on their japa and Bhakta Philip’s young tulasi plant.

Every morning we sat together on the flattened book boxes we had emptied the day before. I think Tulasi doubled in size in those three days with all the intense devotion and sun. You could almost see her growing. We rushed efficiently through our morning duties, because the customers were already waking and it was going to be another sweltering-hot day, too hot for sleeping or for anything but drinking water and distributing books.

The heat was dizzying. The crowd was dizzy from other substances, and I was dizzy with the near-intoxication you sometimes feel when you meet someone who appreciates and wants to buy Srila Prabhupada’s books.I learned to keep that in check, following Bhakta Philip’s lead.There’s no time. With 100,000 people here, that means 9,000 for each of us to meet in three days. Our duty is to keep moving and give everyone a chance. We’ll have to ponder Lord Caitanya’s mercy next Monday; right now we’ve got work to do on His behalf.

People sit in their campsites under shade canopies with tie-dyed sheets; Jimi Hendrix posters; American, African and Tibetan flags; and Indian prints. They surround a large hukkah with several hoses, and we barge right into their space: “Hey guys. Look at this.”

At one site I visited, a couple lay in a wading pool, drinking beers and eating hot dogs, hardly wearing anything, eyes rolling with intoxication. They looked like everything we are opposed to, and yet…. “Hey, we got your book yesterday, and you’ll be happy to know that we were reading from it this morning. We had, I guess you could say, a spiritual service with it. It was very inspiring.”

A few more from their group staggered up and nodded in agreement. “Yeah, you guys are really cool. Thanks for being out here! What other books do you have there?”

I had done plenty of book distribution in the ’70s and ’80s. In those days I would go all day and perhaps meet two or three people who seemed interested at all. Out here pretty much all the people sincerely appreciate what we’re up to. If they’ve already got a book, often they’ve tried it and are willing to take another, with the understanding that these books need to be read in a reflective, meditative mood. They’ve seen us at many other shows and like us for what we do. All they know about us is that we sell books, these books, cool books with far out pictures.

I followed a brahmacari for a while to learn his techniques. “Hi guys. These are the books from the Himalayan mountains, the original books on yoga, reincarnation and Eastern spirituality. Heard of Sanskrit? Here’s a CD-ROM with 38 volumes like this one. We’re monks making this knowledge available to people. There’s no price; people give donations. Every cent goes back into printing and distributing. I’ve taken a vow of poverty. This isn’t a money-making thing; we’re just spreading knowledge.” The whole time he was speaking and walking quickly, like a phone call to India back when it was a dollar a minute, to get to the point right away. “Take a stack of books. Give $20 or $100, whatever you can.”

Then I saw why he was going so quickly. One group gave $20, the next $30, the next $25, each getting a nice load of literature. That was easy, but then about ten in a row with no result. “Would you like a free magazine about chanting Hare Krishna?”

He’s definitely in wide-open-distribution mode, I thought. Getting the books out is more important than focusing on money. I watched him showing a hardbound copy of Bhagavad-gita As It Is to a young lady who could only scrape up 20 or 30 cents. She really seemed interested. “You keep it, and respect it as if you paid $100 for it. Is that a deal?”

If someone wasn’t interested at all, he would move on quickly. “Don’t pull on the green apples,” is what Bhakti Tirtha Swami had told him. “Don’t waste your time, or theirs; there are plenty of ripe ones out there.” There certainly was a ready clientele over that weekend.

After finishing our final hour of book sales, we regrouped, said our goodbyes, and drove off. As the van turned the corner, Bhakta Philip pointed to a huge, neat stack of flattened book boxes. “Now that’s a beautiful sight.”

5 Responses to Vanaprasta Means Back in the Book Van