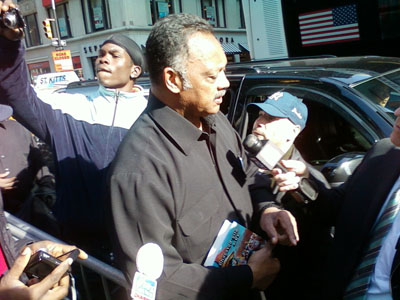 A few days ago I was at Occupy Wall Street in New York City distributing Srila Prabhupada’s books.

All of a sudden a Black SUV with tinted out windows pulled up on the side of the road and a few men got out. One of them was a black man dressed in a nice suit. Within a few seconds the man dressed in the suit was surrounded by about 50 news people with television cameras and microphones all trying to get at him. I had no idea who he was, but I figured he must be someone important and should have Srila Prabhupada’s Bhagavad-Gita. Since I was already holding a stack of Gitas on my chest I immediately pushed my way through the mob of news and television reporters to get to this (unknown to me) man. Just as I reached him (by Krishna’s arrangement) he stopped speaking. Seizing the moment, I took a Bhagavad-Gita off the stack I was holding and cut in, saying in a load voice, “Excuse me sir, these books are 5000 year old original texts about God, the soul, consciousness and the mind”. I asked if he would take one and read it. He said yes, and right at the instant he took the book all the reporters and television people pushed me aside, and started yelling questions at him. It was as if Krishna had orchestrated the whole thing and created a short window of opportunity for me to give him the book. It was kind of mystical. As I was being pushed away I manage to quickly grab my phone and take a picture of him holding the book. As you can see from the picture, he held Prabhupada’s Gita right in front of him as he was being interviewed and  filmed by the TV people. Who could ask for better advertising?!

After talking to the media for a few minutes, he got back in his car with Prabhupada’s Gita and drove off. As the crowd dissipated I asked one of the TV crew people, “Who was that man?” The TV guy I asked just burst out in a sarcastic laugh and yelled at me in an angry tone of voice, “Get out here! Are you joking?!” I explained to him, “No, I am serious, I am a monk. I have not watched television, radio or newspaper for the last 16 years. I don’t know anything but spiritual stuff.” As he turned to walk away the TV guy replied in disgust, “You mean you pushed me out of the way to get to Jesse Jackson and you don’t even know who he is?! I can’t believe you!”

In trying to find out who this man called Jesse Jackson is, I talked to some other bystanders that also could not believe I did not know who he was. I finally found out he is the founder of the Rainbow Coalition, ran for president, was voted “the most important black leader”, famous activist for black and minority rights,  and was a very close friend of Martin Luther King Jr.