I am very glad to hear the book distribution is increasing. The more the books are distributed, the more the ignorance of the Age of Kali will be smashed

One young man was so grateful and excited to get Srila Prabhupada's Bhagavad-gita that he became overwhelmed. He could not believe that these original 5000 year old texts that hold secrets to all life, the mind and consciousness are still there, for him to read!

My Guru Maharaja passed in 1936 and I started this movement in 1965. Even guru is not physically present, if you follow the vani, then you are getting help

If every devotee took some of Prabhupada's books with them and simply offered the people they meet a book just think of how rapidly the world would change!

From Naradhama to Angel Instantly, This Is Srila Prabhupada’s Program

It’s so nice to witness Srila Prabhupada’s mercy in action! It often even amazes me and I have been distributing Srila Prabhupada’s books for many years seeing it happen every day, but it’s always like the first day, new and fresh

He said "I have seen you at thirty festivals and never got one of your books before, but today I will take all of your books" and he gave me about 25 bucks 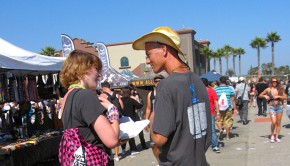 Astonishing things happen on book distribution, they are very simple, brief exchanges that only last a few minutes at most, and you can experience it too. 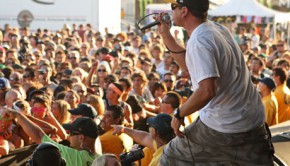 WANT TO GO ON THE WHOLE VANS WARPED TOUR FOR FREE?

This is an amazing opportunity for anyone that loves Prabhupada, likes to travel and wants to see the whole country and have a good time doing it! 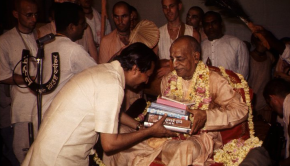 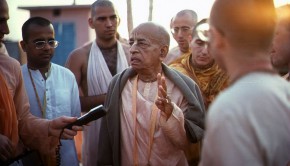 I started explaining the books then he brightened up. All of a sudden he told me that he meditates and asked, "If I want to do more, what can I do?"

Everyone can, as they listen to the lectures, label them, organize and transcribe them on their own time, then send the results back to the Archives