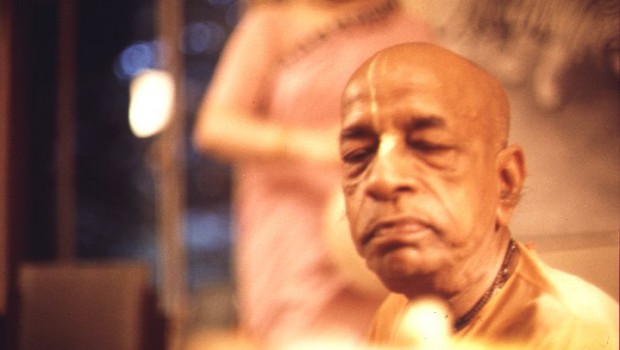 My Guru Maharaja passed in 1936 and I started this movement in 1965. Even guru is not physically present, if you follow the vani, then you are getting help.

Indian Man (2): …like your company very much in Toronto and we feel like talk you so much, but we don’t have so much time to talk with you. You have so much mercy, so we have not… know so much about Krsna from you.

Prabhupada: So in my absence you read the books. What I talk, I have written in the books. That’s all.

Prabhupada: That’s all right. But still, you can associate with me by

Sudama: …Prabhupada, either of those associations, which is the highest?

Prabhupada: Both are equal.

Sudama: Both are equal?

Prabhupada: You have to associate with both. Guru-krsna-krpaya paya bhakti-lata-bija [Cc. Madhya 19.151]. Both guru’s krpa and Krsna’s krpa, they must be joined. Then you will get. [break]

Jayadvaita: We’re very eager to get that guru-krpa.

Jayadwaita: We are, all of us.

Prabhupada: Yes. Yasya prasadad bhagavat-prasadah **. If you get guru’s krpa, then automatically you get Krsna.

Prabhupada: Otherwise how it can come?

Sudama: Not only that, but your mercy is spread everywhere, and if we take advantage, you told us once, then we will feel the result.

Jayadvaita: And if we have faith in what the guru says, then automatically we’ll do that.

Prabhupada: Yes. My Guru Maharaja passed in 1936, and I started this movement in 1965, thirty years after. Then? I am getting the mercy of guru. This is vani. Even the guru is not physically present, if you follow the vani, then you are getting help.

Sudama: So there’s no question of ever separation as long as the disciple follows the instruction of guru.

Prabhupada: No. Cakhu-dan dilo jei… What is that, next one?

Prabhupada: Janme janme prabhu sei. So where there is separation? Who has opened your eyes, he is birth after birth your prabhu.

Paramahamsa: You never feel any intense separation from your spiritual master?

Prabhupada: That you do not require to question. (end)

One Response to In my absence you read the Books — Prabhupada