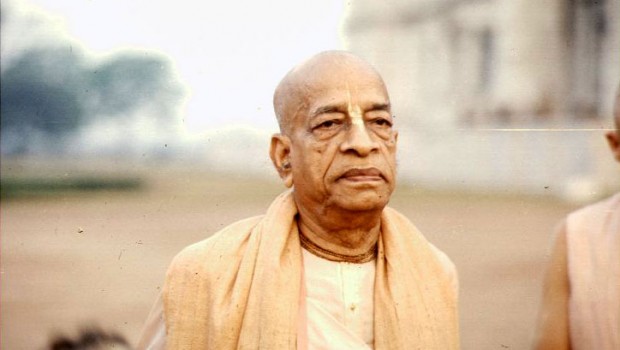 Recently I was distributing Srila Prabhupada’s books at the monuments in Washington DC and I stopped a group of people. One girl in the group asked me, “Have you been to ECU before?” I thought for a moment and then I remembered that ECU stands for Eastern Carolina University. She said she met me there in front of a residence hall and she and her friend got books from me. Then I remembered the whole thing and how we had a very nice, deep conversation about the philosophy and how they went back to their dorms and got all the money they had and came back and took all the books I had.

I asked her if she read the books yet and she said yes and now she is taking courses at her school on eastern philosophy and Hinduism. She was so excited and surprised to meet me again so randomly here in DC over a year later. I showed her that now we have Srila Prabhupada’s original KRSNA book and it is so nectar. She gave a donation for that one too. I showed everyone else in her group the various books I had of Srila Prabhupada and almost everyone in the group of about six people took a few books each. Luckily I had bags for them to carry away their new-found treasures.

It’s a funny dynamic here on the DC mall – there are so many big, big museums full of lies about evolution, and there are so many priceless gems, works of art, ancient artifacts and exhibits of the material energy. People come from all over the world to see all this and the museums work so hard to keep the people coming. And there I am, just a simple tiny person, wandering around on the street and this simple tiny person (by Srila Prabhupada’s causeless mercy) has the absolute truth, the real priceless gem, full of priceless art (real windows into the spiritual world), and the oldest artifacts in existence (the Vedic texts) that can end the cycle of repeated birth and death. And they thought they came here to see the museums, ha ha! Little did they know that Krishna actually brought them here to get Srila Prabhupada’s wonderful books.

At the end of a very hot and sweaty long day on the DC mall, talking to all the tourists and kids trying to convince them to take Srila Prabhupada’s books, I was walking back to my van, all out of Gitas and only had KRSNA book and Isopanisad, and a few Perfection of Yogas left. I saw one Spanish looking man walking with two kids and figured although I was exhausted, and only could think of getting a shower to wash off all the smog from the tour buses that was stuck to me on this hot humid day, I had to at least try to stop him and show him the books for Prabhupada’s pleasure. He looked up at me with a big smile and said “Krishna!?” I said yes, and being a bit sunstroke and spaced out continued trying to explain the books to him thinking he didn’t know anything. He, being a gentleman, patiently listened to me then began to explain that he already has several copies of this KRSNA book and the Gita and many of Prabhupada’s books and has read them, chants and does pranayama etc. He opened up his wallet and handed me a 20 dollar bill and gratefully accepted my last three books, being that I had the these newly published original editions from KBI that he has not seen yet (even though he already had other previously printed versions).

He told me that he had seen Krishna devotees around for years during the 70’s due to his work and would see the devotees at the airport and would avoid them like the plague. He felt them to be a nuisance. He and his business partners would walk around them at a distance just to avoid them and not come too close to them. He then told me that later in his life some time in the 80’s he began to think about things a bit more and started looking into religion and philosophy and reading up on it but he said that unfortunately now that he was interested there was all of a sudden no devotees anywhere to be found – it was as though they all disappeared. Then he said one day he was at an airport in North Carolina and he saw one lady in a sari passing out books and he talked with her for a long time and bought all her books and read them and ever since then he would always buy books from anywhere he found them. He said he even bought one of his big KRSNA books from a thrift store.

He was very fired up and said he now regularly chants and has come to one of our temples but still has difficulties finding devotees. Then he looked at the two kids that were with him patiently waiting for him to finish so they could go and the man pointed at me and explained to them that I was a devotee and that devotees are very rare and special and they should offer respects to me and feel fortunate to have met me. I immediately grabbed his arm and cut him off and flipped the books over and pointed to the picture of Srila Prabhupada and explained to all of them that, “No! Srila Prabhupada is the real devotee, I am just Prabhupada’s servant. I am no one special. Srila Prabhupada is the special person and he is an eternal personality. He is alive now right here in these books and when you read these books you associate with him. That is the transcendental inconceivable quality of a pure devotee – whatever they write is spiritual and they are personally present in that writing, and they can personally speak to you by you reading their books.”

He seemed a bit surprised by my sharp reply to his glorifications of me. But by the look in his eye I could clearly see he was very appreciative of my mood. It was one of those moments that you both just stand there looking at each other with no words that can explain your feelings.

Another day I was in front of one of the museums in DC and I stopped one lady that looked a bit exhausted from the day’s hustle and bustle to see as much as she and her daughter could. I presented Srila Prabhupada’s books to her and she just listened to me for some time and then when I asked her for a donation she handed me five dollars and took Prabhupada’s Gita. She apologized saying that this was all she had left but she would try to track down her daughter and see if her daughter had any money left that she could get from her. After an hour or two she found me again and put ten dollars in my hand and asked for Srila Prabhupada’s KRSNA book. Later I saw her sitting in front of the museum with her daughter by her side (see picture) reading Srila Prabhupada’s KRSNA book in total absorption and fatigue from the days excitement. So I took a picture. 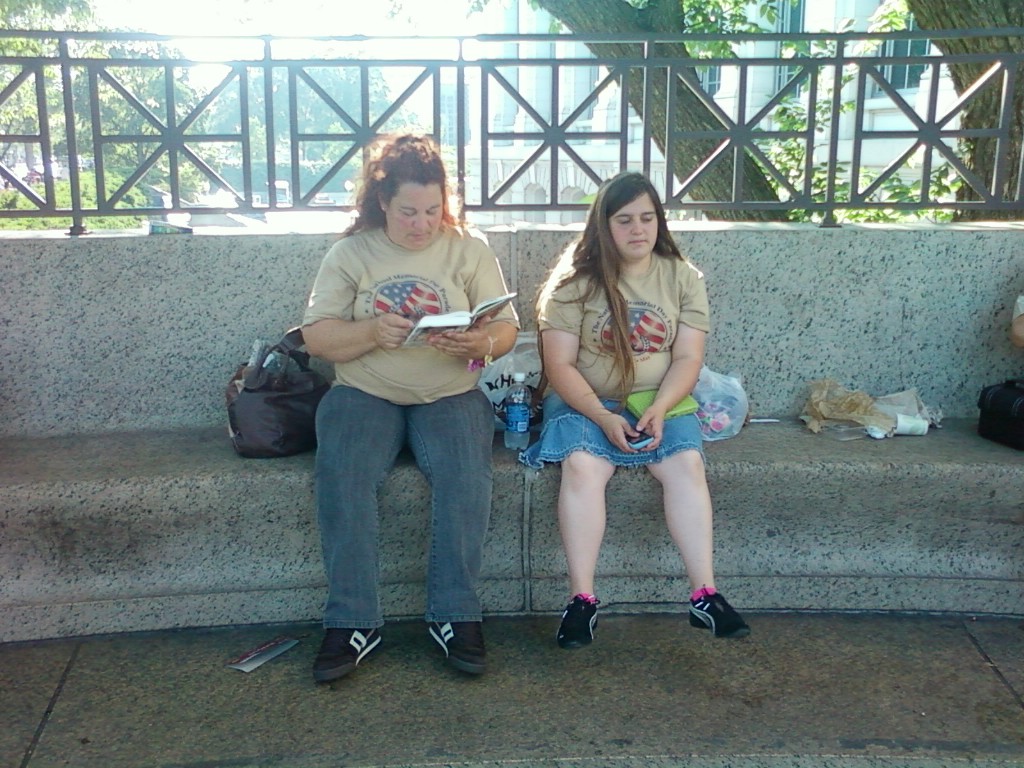 I was at a festival recently (in the summer when school is out I go to festivals and concerts to try to distribute Srila Prabhupada’s books) and I often times meet the same people again and again that also, like me, go to lots of festivals. Of course they go there for different reasons then I do).

I met one man who told me I should not bother with him. He did not look like one of the many grungy hippies or a dumb kid, he was well dressed and appeared to be in his late thirties or early forties. Judging by the look in his eye and the way he talked, he was a pretty together guy. He told me that he does not have time to read this stuff. He said he is a sales consultant for large companies and is very busy. I told him to just give these books a try. Great men like Einstein, Gandhi, Emerson, Thoreau, and even Oppenheimer and others would derive great realizations and guidance from these books. They are over five thousand years old! I have a friend who is a mechanic and he works like crazy, 12 hours every day except Sunday, which he takes off. And every day right after he wakes up he simply reaches over for the Bhagavad-Gita and reads one of these texts (as I pointed to the texts and flipped through the book indicating that all the texts are very short – the longest one is just a few pages but most are less then one page long). I told him, “You can also do like that, just read one a day – it will keep your head screwed on straight in this crazy world we live in, ya know, a little words of wisdom to carry you through the day.”

I opened Prabhupada’s beautiful KRSNA book and flipped though the pictures and explained to him that you should also take this one, it’s full of small stories, 98 total, and they are kind of like Dr. Seuss stories, amazing, far out stories, love stories, big battles, kings, queens, big monsters. I flipped to the picture of king Muchukunda burning up Kalyavana and said, “Look at this guy, he can shoot fire out of his eyes. But within all these wonderful stories there are very deep spiritual realizations and teachings about the mind, consciousness and the real ultimate goal of life.”  Then he told me: “I have seen you at over thirty festivals and never have got one of your books before, but today I will take all of your books” (I only had KRSNA, Gita and Isopanisad with me at the time) and he gave me about 25 bucks.

7 Responses to Persistance! — The Key to Distributing Srila Prabhupada’s Books