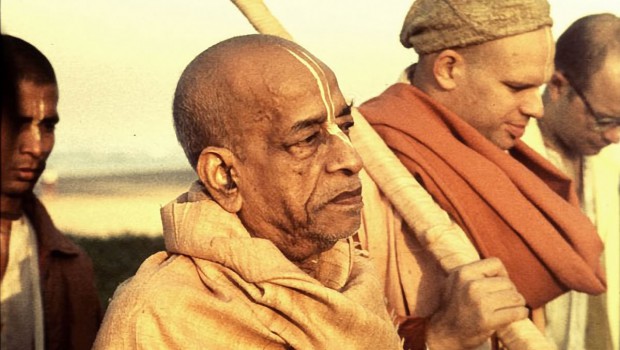 There is a malignant disease spreading among the Gaudiya Vaisanva People in the form of disobedience of the instructions of the Recentmost Authorized Acaryas. This disease of disobedience is being introduced and sustained by certain individuals who have entered the society of devotees in the garb of advanced and trustworthy vaisnavas when in fact they are impostors of the the worst kind.

The author begs forgiveness for his lack of scholarship, editorial correctness and pleasing presentation. He also apologizes for his complete lack of credentials in the matter of books written, Temples opened, disciples initiated or valuable services rendered. He is in all estimation unworthy of any title or consideration, like a derilect in the street, yet wishes to render the following service for the pleasure of the assembled Gaudiya Vaisnava People. He therefore falls prostrate at the many feet of the Gaudiya Vaisnava People and beseeches them to accept his offering in the manner of one who takes gold from a filthy place. If there is gold here please take it, and if not please bless him by forgiving his offenses and kicking him aside with your feet.

There is a malignant disease spreading among the Gaudiya Vaisanva People in the form of disobedience of the instructions of the Recentmost Authorized Acaryas. This disease of disobedience is being introduced and sustained by certain individuals who have entered the society of devotees in the garb of advanced and trustworthy vaisnavas when in fact they are impostors of the the worst kind. As a result of their nefarious activities of self agrandizement, the Gaudiya Vaisnava People have been polluted, deluded and misled. The final upshot of this is that the society in general has been transformed into a mundane religious institution of fruitive workers supporting a class of Temple dwellers who do not use the collected funds in accordance with the orders of the Acaryas. Instead, they maintain a minimum acceptable presentation and use the remainder for a comfortable life of subtle sense gratification. This subtle sense gratification takes the form of creating sectarian vaisnava organizations, writing books outside the scope of the Acaryas prescriptions and in general making everything into a watered down version of the non-sectarian truth. This disease has spread so rapidly and so deeply that nothing external remains of the original non-sectarian offerings of the Recentmost Authorized Acaryas, namely Srila Bhaktivinoda Thakur, Srila Bhaktisiddhanta Sarasvati Thakura and Srila Bhaktivedanta Swami.

Their main teachings of Philosophy, Religious Principles, Cultural Development and Unified Global Proliferation have either been disobeyed, neglected or distorted. This has been done in order to form a horde of sectarian organizations headed up by small “a” acaryas whose main focus is their own personal agenda based on limited and insufficient conceptualization of the non-sectarian truth. They have become expert in presenting their disobedient and thus sectarian views in the guise of the non-sectarian truth. They are everywhere and in every so-called Vaisnava organization and, as if in league with the forces of universal illusion, they conspire to tear down the edifices of non-sectarian wisdom given by the Authorized Acaryas.

In this way the World at large has been robbed of the non-sectarian truth leading to love of God and is given a cheap and ineffectual replacement in the form of sectarian organizations extolling and subsisting on fruitive work. In the Srimad Bhagavatam this form of false spirituality is known as “Kaitava Dharma”, Cheating Religion. In the wake of such false religions comes the host of mundane problems and challenges that one now sees ravaging the unprotected Gaudiya Vaisnava People. Child abuse, rape, domestic violence, divorce and remarriage, substance abuse, addiction, theft, graft, extortion, politics, fraud, exploitation of the weak, employment by non-devotees, unneccessary accumulation of wealth, children in public school, editorial distortions, materialistic business ventures conducted by Brahmanas, chronic personality disorder, and so on. In fact the Gaudiya Vaisnava People are seen to be afflicted with nearly all of the social disorders of the surrounding mundane society. The only apparent differences are in their “external” show of religious trappings such as Indian fashions, vegetarianism, festivals and Sunday Temple attendence. No longer visible are the expected symptoms of transcendental happiness, material austerity and mercy toward the fallen souls. The Gaudiya Vaisnava People, on a Global scale, have fallen prey to the glaring lure of the Western way; money, power, consumerism, mundane intellectualism and, in so doing have lost the real treasure of the Gaudiya Vaisanva Sampradaya.

Srila Bhaktisiddhanta Sarasvati Thakura gave the order to all of his disciples to carry on the mission cooperatively by the establishment of a GBC. His order obviously reveals the concept of a unified and non-sectarian proliferation of the Mission. Those who disregard and disobey this instruction permanently station themselves in the ranks of the sectarian. After his departure his disciples failed to follow this instruction and instead set up a system of independant and seperate endeavour. This action created the Great Schism of the Gaudiya Vaisnava Sampradaya.

Srila Bhaktivedanta Swami Prabhupada rejected all of his Godbrothers for failing to do this and forbid his disciples, in writing numerous times, to have any association with them for that reason. He established a GBC and became the sole inheritor of the non-sectarian truth and vision of the Gaudiya Vaisnava Sampradaya. His final words to his disciples were for them to carry on the mission on a platform of cooperation.

In his absence the ISCKON GBC has also disregarded and disobeyed numerous of his instructions and have, in doing so, relegated the entire ISKCON society to the ranks of the sectarian. The ISKCON GBC has surreptitiously usurped the position and role of the founder Acarya and now foolishly thinks it has the mandate to delete, distort and change the founders instructions to meet their tiny and personally motivate outlook.

Also in the absence of Srila Bhaktivedanta Swami the remaining disciples of Srila Bhaktisiddhanta Sarasvati, with their disciples along with disciples of Srila Bhaktivedanta Swami , with their disciples, have again disobeyed the GBC order. They have set up an association of seperate and independant sectarian organizations to present their misconceptions and disobedience in the garb of authenticity. To do this they have jumped over the heads of the Recentmost Authorized Acaryas and now think they are bonafide and non-sectarian members of the Gaudiya Vaisnva Sampradaya through the Visva Vaisnava Raj Sabha originally conceived of by Srila Jiva Gosvami. This is in direct disobedience of the rule that the Previous Acaryas are to be understood and served under the guidance of the Recentmost Acarya. This means that the true vision of Srila Jiva Gosvami has been presented by Srila Bhaktisiddhanta Sarasvati in the form of cooperation through the agency of a GBC. It has further been refined by the teachings of Srila Bhaktivedanta Swami. Due to their original disobedience of the GBC order, the remaining disciples and followers of Srila Bhaktisiddhanta Sarasvati are not capable of understanding or carrying out the vision of Srila Jiva Gosvami. What they do accomplish however is the establisment of a spurious or “apasampradaya” organization based on the main sectarian principle of disobedience.

As a result of such widespread disobedience each and every Vaisnava organization now stands among the ranks of the sectarian. The non-sectarian truth and vision of Srila Bhaktisiddhanta Sarasvati and Srila Bhaktivedanta Swami are no longer manifest in physical form. All that remains are the books of Srila Prabhupada and a deeply afflicted, deluded, and disorganized family of disciples.

This article is a call for the “nirmatsaranam” [pure in heart] disciples of His Divine Grace A.C. Bhaktivedanta Swami Srila Prabhupada to throw off the shackles of illusion now settling around their lives. This is a call for them to come together, to ennumerate the instructions of their Spiritual Master, and to cooperatively carry on his mission to the next generation and beyond. This is an audacious and mighty challenge because history and current reality show that these disciples, who have all received the order to cooperate with one another, have also fallen prey to the false concept that they can please their spiritual master by a separate and independant effort.

The Kali Yuga is a terrible time of hypocrisy and quarrel. The intelligence and mental capacity of the people is meager in this age and close association is essential to draw strength for spiritual emancipation. In the absence of cooperation around the instructions of the Acaryas there is no hope for the masses of suffering humanity and there is no hope of a disciple pleasing the spiritual master by a seperate and independant endeavour.

This is a call for the entire body of the Gaudiya Vaisnva People to come together under the care and direction so Srila Bhaktisiddhanta Sarasavati and Srila Bhaktivedanta Swami, the Recentmost Authorized Acaryas. This is a call to heal the Great Schism, to mend the disease of sectarianism and to bring the People of the Gaudiya Vaisnava faith together in a Unified Global Culture. This is an appeal to create a single coherent organization sustained by a GBC vested with the mission of maintaining the principles and practices within the Gaudiya Vaisanva Sampradaya, as instructed by both Recentmost Authorized Acaryas.

A Solid Foundation Of Obedience

“By associating with a devotee, one awakens his faith in devotional service to Krsna. Because of devotional service, one’s dormant love for Krsna awakens, and thus one’s material, conditional existence comes to an end.”
[Chaitanya Charitamrita, Madhya Lila, Chapter 22, Text 49]

“Only unto those great souls who have implicit faith in both the Lord and the spiritual master are all the imports of Vedic knowledge automatically revealed.”
[Svetasvatara Upanisad, Chapter 6, Text 38]

“The instructions and opinions of the Acharyas are the active principle and essence of our spiritual life. Anyone who disobeys, transgresses, bypasses or minimizes the instructions of the Acaryas immediately becomes useless or ineffectual.”
[Chaitanya Charitamrita, Adi Lila, Chapter 12, Text 10]

(2) Suffering Of The Ignorant Masses

(3) Sectarianization Of The Gaudiya Vaisnava Sampradaya

Perhaps the disease of sectarianism has spread too far and too deep and the Gaudiya Vaisnava People have been stripped of the vitality to form a unified global organization for the cooperative execution of the Mission. If this is so then a terrible plague has set its print on every heart and the world is in peril. If this is so then let the prayers of the nirmatsaranam ascend to the lotus feet of Sri Caitanya Mahaprabu and there incessantly supplicate for His Divine Mercy in the benediction of non-sectarian cooperation.

Praying for such mercy this Prabhupada dasa Adhikari supplicates at the feet of his Srila Prabhupada.

10 Responses to The Disease of the Gaudiya Vaisnava People