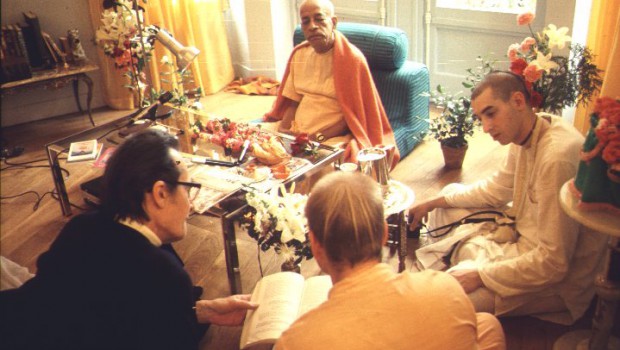 For those who saw the Hare Krishna movement spread from city to city and from country to country, it was clear that the original version of Srila Prabhupada’s books was full of spiritual potency and did not require to be changed in any way for his words to act upon the hearts of the conditioned souls.

The question as to whether the writings of the acarya may or may not be revised by his disciples after his disappearance is answered by the rule of “arsa prayoga”. This principle states that one should not see mistakes in what the spiritual master has written or think that his writings may be changed to make them more effective or politically correct. To preserve his teachings in their originally published form is the way by which the acarya is honored, and to do otherwise is to dishonor him. That is the rule of “arsa prayoga”, a principle that devoted followers of a bona fide spiritual master must adhere to without deviation.

The rationale for changing Srila Prabhupada’s books was based on a series of false arguments, many of which were defeated by Srila Prabhupada himself as this article will show. To justify their actions, the BBT editors created the illusion that Srila Prabhupada’s books were defective and in need of extensive editing even though they knew His Divine Grace had never authorized anyone to revise his books after his disappearance. Subsequent to his departure, they conveniently overlooked the principle of “arsa prayoga” and proceeded to do exactly what vaisnava tradition strictly prohibits.

It was by the distribution of transcendental literature that Srila Prabhupada hoped to introduce Krishna consciousness to people everywhere. For those who saw the movement spread from city to city and from country to country, it was clear that the original version of Srila Prabhupada’s books was full of spiritual potency and did not require to be changed in any way for his words to act upon the hearts of the conditioned souls. Srila Prabhupada himself never doubted that his books would bring about a revolution in consciousness and induce people throughout the world to take shelter of the Supreme Personality of Godhead. His transcendental vision was revealed in the following letters, all of which refer to the original version of his books.

“I am glad to learn that you are having nice success in placing my books in the librairies and in schools and colleges…. I am sure that this will revolutionize the thinking of the thoughtful men of your country as well as the students and professors, and the ultimate end will be to save the world from the clutches of material illusory activities which is now causing havoc everywhere.”
(Letter to Karandhara dated 9-13-70)

“If we introduce these books in all of the bookstores, schools, colleges, libraries and everyone’s home, our religion will be the only religion in the world very soon.”
(Letter to Krishna Bamini dated 1-4-72)

“We have got a great mission to fulfill, and these books and magazines are the torchbearers of Truth which can save the world.”
(Letter to Ksirodakasayi dated 1-3-72)

Srila Prabhupada’s books, then, should be thought of as a permanent legacy to be embraced and shared by devotees everywhere. Their purpose is to establish religious principles and enlighten human society. They were Srila Prabhupada’s gift to the world and proof of his empowerment by Krishna. There was no reason, therefore, for His Divine Grace to recommend that his books be further revised. He was of the opinion that another round of editing would not be necessary for his literatures to deliver the world from the darkest regions of ignorance.

Our guideline in Krishna consciousness is that the only duty of the disciple is to faithfully execute the order of the bona fide spiritual master. If a disagreement arises over how to best serve the guru, the issue can generally be resolved by following the course of action chalked out by the spiritual master himself through direct instructions to his followers. In a room conversation that took place in Paris in 1976, Srila Prabhupada elaborated on this point, and his explanation soundly defeats virtually all of the arguments presented in favor of changing his books.

Excerpt from a room conversation taking place in Paris, France on August 5, 1976

Hari-sauri: Sometimes there’s some discrepancy, two parties, that may both want to serve but they have different ways, different ideas how to execute the same order, so there may be some disagreement.

Srila Prabhupada: Service means you must take order from the master. Otherwise, it is mental concoction. Actually the servant requests, “How can I serve you?” So when the master orders, “You serve me like this,” then you do that, that is service. And if you manufacture your service, that is not service. That is your sense gratification. Yasya prasadad bhagavat-prasadah. You have to see how he is pleased. Now if he wants a glass of water and if you bring a nice glass of milk, you can say, “Milk is better than water. You take it.” That is not service. He wants water, you give him water. Don’t manufacture better thing.

After Srila Prabhupada’s disappearance, and without his consent, the BBT editors took it upon themselves to re-edit his books, making thousands of unnecessary changes in an attempt to improve their wording and style. But, as Srila Prabhupada stated above, without his order, their service was a concoction. They were offering him milk when he had asked for water. He wanted them to follow the rule of “arsa prayoga”, but they decided to manufacture a better thing. So, according to the spiritual master, their editing was not service at all, but sense gratification.

In preparing his books for publication, Srila Prabhupada did not want a great deal of time spent on editing work. Neither was Srila Prabhupada very concerned with style. His Divine Grace once said,

“We are not meant for presenting any literary masterpieces.”

In the following letter, he carefully instructed his book production staff concerning his priorities:

“We have to do things now very dexterously, simply we have to see that in our book there is no spelling or grammatical mistake. We do not mind for any good style, our style is Hare Krishna, but still, we should not present a shabby thing. Although Krishna literatures are so nice that, even if they are presented in broken and irregular ways, such literatures are welcomed, read and respected by bona fide devotees.”
(Letter to Satsvarupa dated 1-9-70)

Unless the BBT trustees felt that Srila Prabhupada’s books had been shabbily presented, they had no right to tamper with them. Of course, it is not our philosophy to print errors, but spiritual subject matter is transcendental to all mundane considerations and remains potent despite mistakes in grammar, spelling, etc. Once the presentation of his books had met Srila Prabhupada’s standard of approval, he adamantly warned the BBT staff that further changes could not be made. He said they should not even think there were mistakes in his published works.

When it was brought to Srila Prabhupada’s attention in 1977 that significant changes had been made in his books without his approval, he instructed the directors of the BBT that the next printing of his books should be again to the original way. The BBT editors knew how averse Srila Prabhupada was to making revisions in his books, especially once they had been published. How, then, despite his specific instructions, could they justify acting against his wishes and dare to change everything shortly after his physical departure?

If Srila Prabhupada ever spoke of making improvements, he was referring to the quality of the printing only and was not suggesting that changes be made in the text of his books. When Srila Prabhupada first examined the 1972 MacMillan Gita, for example, he said it did not meet our vaisnava standard. He was disappointed with the quality of the paper, the binding, the color work and so on. These are the things he wanted improved. As far as the text was concerned, he said that nothing should be added or subtracted.

4 Responses to Arsha Prayoga – Part One