Did NASA Really Send Men to the Moon? You Decide

Of course today a very large percentage of the population is aware that NASA faked the 1960’s Apollo Moon Missions but in the 1960s almost everyone believed in science and believed in NASA. When Srila Prabhupada declared, “They have not gone to the Moon,” he was practically the only person in the world expressing that opinion.

Today there are many films documenting NASA’s fake moon missions, however they are cleverly hidden by google, so you are not likely to stumble across them, you can check out some of them with this playlist:

Prabhupada’s position created problems with some of his followers also. Some disciples left the movement, because they could not believe that scientitsts would lie to them. But Prabhupada was convinced, that “they can not go to the moon with their mechanical rockets and space ships.”

Why? Why was Prabhupada so convinced NASA was not able to send men to the moon when the whole world was believing in NASA and science?

The reason is Srila Prabhupada is completely aware of the construction and workings of the material world we find ourselves implicated in.

Of course there is a way, but that is not by using rockets or any mechanical machine. The way is by yoga, meditation. In that way we can travel to other planets as Srila Prabhupada describes in his book: Easy Journey to Other Plantes:

“Conditioned life is just like life in a prison house in this material world. A prisoner cannot freely change from one cell to another.”

“In free life one can go from one home to another home, but in prison life one cannot do that but must stay in his cell.”

“All these planets are like cells. We are trying to go to the moon, but it is not practical by mechanical means.”

“Whether we are American, Indian, Chinese or Russian, we have been given this planet to live on. We cannot leave–although there are millions and billions of planets and although we have machines by which we can–because we are conditioned by the laws of nature, God’s laws.”

“A man who is put into a certain cell cannot change at will without superior authority. Krishna says in the Bhagavad-gita that one should not try to change from one cell to another. That will not make anyone happy. If a prisoner thinks, ‘I am in this cell–let me request the warden to change my cell, and I will be happy,’ that is a mistaken idea. One cannot be happy so long as he is within the prison walls.”

This collection of video clips provides an overview of NASA’s 1969 Apollo 11 mission. It reveals the intense political pressure on NASA to put a American on the Moon before the end of 1960s decade and reveals the extreme complexity of the Apollo missions and hints at the extremely small possibility of the mission being successfully executed.

4 Responses to Did NASA Really Send Men to the Moon? You Decide 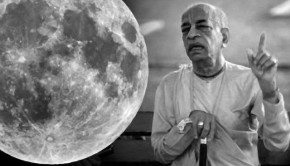