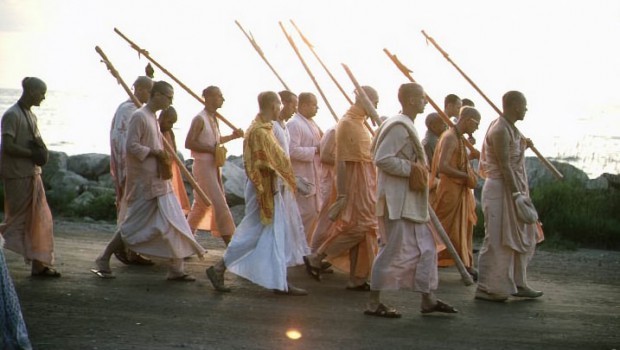 So far a Temple place is concerned, even there is no place, we can sit down underneath a tree and chant as I did in New York. Krishna will give a nice place.

Please accept my blessings. I beg to acknowledge receipt of your two letters dated November 9th and 11th, 1970.

You had mentioned going next to Singapore from Hong Kong. Singapore is also a nice place for organizing a center. There are many Indians and they will support the Movement there. Yes. The several cities you mention are all important cities in the Far East portion. Originally they all had Indian culture. But I do not think you should spend your time at this stage of life in trying to learn so many different local languages. That is not practical for us. Our most successful program is to begin preaching with the help of an interpreter from the local people and later train up some intelligent men who speak English. When they are conversant with our philosophy, they can preach to the general public. The Hare Krsna Mantra is international mantra. Simply try to induce people to chant and they will understand everything. Externally, English language is understood everywhere.

Your enthusiasm for starting centers for educating the people of the world in this sublime Krishna Consciousness process is very good. You are actually authorized agent of my Guru Maharaja and through Him, Lord Caitanya. He predicted that in every town and village of the world His Name will be well known and you are trying for fulfilling His mission, certainly He will give you all strength and blessings. We simply have to work sincerely and automatically all other things will come. Recently one very responsible Indian gentleman was in our Temple in Sydney and he has given very good certificate for our activities there.

Regarding staying in the various Temples of demigods that is quite alright, but you should not take prasadam from the demigods if you are offered. Our method is to follow the system as it is done in Jagannatha Puri. There, the bhoga is first offered to Lord Jagannatha and then His Prasadam is distributed and offered to various demigods who reside in some nearby Temples. Then the remnants of such Prasadam may be taken by us.

So far a Temple place is concerned, even there is no place, we can sit down underneath a tree and chant as I did in New York. Krishna will give a nice place. You have been anxious to stick to fulfilling the desires of Krishna and Spiritual Master without deviation. Our technique is that we work sincerely and the dictation will come from within; Krishna is seated there.

3 Responses to Hare Krishna In Every Town And Village