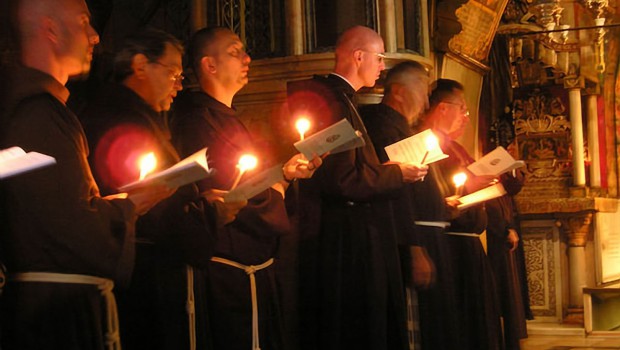 I find that genuine Krishna Consciousness is perfect in itself. Perhaps you feel the same way about Catholicism and I can respect that. The genuine teachings of Lord Jesus are perfect and beautiful. No matter how much man may misrepresent these teachings the Truth itself cannot be changed and that’s what we live for.

I recently received your letter sent to my mother Jean. I am pleased to accept your correspondance with regards to spiritual inquiries and appreciate your prayers. As indicated to you, I am devoted to the practice of Krishna Consciousness, also known as Hare Krishna or Vaishnavism. For the past six years I have studied indepth the scriptures and beliefs of which Krishna Consciousness is based upon. I practice the lifestyle of brahmacari, or that of a celibate monk (similar to being a priest).

Since an early age I recall feeling a dissatisfaction due to not having peace of mind within myself. In my early years up through my teens I searched for ways to improve my consciousness and enjoyment of life however these approaches were only centered around enhancing my own false ego for attaining greater sensual satisfaction. Thus I achieved no real alleviation from suffering and my search continued. Up until then I had no real appreciation for God and religion and going to church was more of a chore than a joyful experience.

Out of high school I had chosen to attend Umass primarily because I thought at the time that it would enable me to enjoy life by being amidst an atmosphere of fun and parties. Actually it turned out to be miserable living in the middle of a party all the time and after two years I wanted only to go somewhere and seek Peace. I thus set out for San Diego California with a vision of beaches and palm trees.

Initially I began to investigate various beliefs and practices of meditation for stilling the mind and becoming peaceful. One series of books I got into was dealing with the development of unconditional love. Still yet at the time I was pursuing sensual pleasure to some degree and had very little understanding about service to God. I had always believed in the presence of a supreme controller yet very little did I recognize the omnipotent presence of God and only conceived of God as an order supplier for my enjoyment. My conception of God was impersonal and more or less I was thinking that I was the enjoyer and God was the servant of my desires.

Somehow or other I became attracted to Eastern philosophy and began to attend services at a temple called Self Realization Fellowship.I studied these teachings for a year. There was often reference to Lord Jesus Christ and I then began to develop an appreciation for Lord Jesus as He began to enter into my thoughts. Over the years of childhood I had of course learned of Jesus Christ and his preaching, miracles and sacrifice. It wasn’t until this point that I really began to take interest in God, Jesus, religion, prayer and meditation. I began to understand that real happiness is through God and practicing spiritual life. Also at this time I was introduced to the name “Krishna” as the speaker of the Bhagavad Gita, a Sanskrit Vedic scripture popular especially in India. I had only read though one somewhat speculative interpreation of Bhagavad Gita and did not quite understand much of it.

This period of study still was wanting for greater understanding and later came to be a stepping stone towards the God consciousness I was looking for. During my twenty second year when I was most eagerly searching for God I found out that I had been living only a few blocks from the Hare Krishna temple in San Diego. I was immediatly attracted to the Krishna Conscious art, music, food and philosophy. It was clear to me at that point that this was exactly what I was looking for.

As I began to study the teachings of His Divine Grace A.C. Bhaktivedanta Swami Srila Prabhupada, the founder of the Krishna Consciousness movement, I found his writings to be most authoritative and thoroughly honest. It was explained to me that God is a person with a form, and that He is the most beautiful and attractive person. This made alot of sense to me and so did everything else that I found in the teachings of Srila Prabhupada. They fully addressed all my inquiries and clearly explained my position as an eternal servant of God. I found the conception of God to be more clear than any I had ever heard of before. In Sanskrit the name for God is “Krishna”, meaning “all-attractive”. In the Vedic literatures it’s clearly describing the intimate details of the Supreme Being in His spiritual abode. These descriptions are often misunderstood by nonbelievers and set aside as myth.

Studying further I found the teachings to make sense with my understanding of uncoditional love. The Vedas clearly state that every living being is an eternal servitor of God .Because love is an independent choice of free will, God creates these material worlds to facilitate the independent desires of the soul. Ultimately God, Krishna is desiring for each soul to reside with Him eternally in His abode where we’re engaged in His loving devotional service. This mutual love exists due to this free will, and if somehow or other the soul desires to be independent, desires to be the master as is God, then it is sent to this material world where it tries to lord over material nature. Actually Krishna is the master, the proprietor, the controller, and enjoyer, but we the living beings come into this world to be this ourselves. It is thus due to envy that one cannot understand God as He is, and when descriptions of Krishna’s supreme enjoyment are spoken of one may criticize or pass it off as myth. It is stated in the Brahma Samhita that Krishna, God is surrounded by hundreds of thousands of beautiful goddesses of fortune who always serve Him with great reverence and affection. Initially one may conceive of God with the fatherly conception which invokes understanding of Him as our protector, sustainer and provider. Going further one can understand God as the Supreme Enjoyer, knowing that everything is meant for His enjoyment including ourselves who are meant for His service which is all blissful.

In the Bible we find the basic principles of spiritual life. Lord Jesus spoke of as much as the people were ready to understand and probably even more. Yet for what He did reveal He was crucified and accused of blasphemy. He stated Himself that there was much yet for Him to reveal but the people, or even His disciples were not yet ready to understand. Essentially, it’s the same principle in any teaching: one must learn the basics first before advancing. A child learns the ABC’s before learning to read Shakespeare.

From what I’ve understood this is how there are various religions in this world. There are false religions of course and yet there are more genuine religions which are set forth accordind to the time, place, and circumstances of the people. Each soul has certain desires to fulfill and capacity to understand the Supreme Truth and thus there are so many positions and types of faith in this world. The essence of true religion is how close it actually brings one to loving God. We understand that God is known by many names as He is unlimited. Thus God is known by various faiths as Krishna, Yahweh, Jehovah, Allah, etc.

Now according to the Vedic scriptures the age we live in is called Kali Yuga and is a fallen age of quarrel and hypocracy. In religion there are so many divisions and falsities. The real religion, – devotional service to God is practically forgotten. Real religion is taken as irreligion, and irreligion is taken to be religion. When the actual Truth is put forward it is blasted by nonbelievers to be nonsense. As in the case of Lord Jesus, the priests and many of the people who thought they were doing the law of God, opposed Jesus. The Old Law was set forth by Moses in the commandments, spoken to him directly by God, and now Jesus was coming and speaking of something which was apparently contrary to this. He was accused of heresy. The people could not understand the higher teachings of the Supreme Godhead, and thus they crucified Jesus thinking him to be a blasphemer. Now with the coming of the teachings of Krishna Consciousness to the West there is the same misunderstandings and people often remain attached to their traditions and belief systems. The essence of these teachings however is indeed true love of God.

One can make a comparative study of Christianity with Krishna Consciousness and find many similarities as well as many differences. Essentially the point is love God with all your heart and Krishna Consciousness teaches one how to practically engage all of one’s mind , body, and senses in devotional service. The differences that exist in the two teachings are mainly found while considering the doctrines of today’s mainstream Christianity. In doing an indepth study I found that what is available on early Christianity reflects a great deal more in harmony with Krishna Consciousness than what is being taught today. The fact is that many things in the Christian teachings have been subject to change. It’s the same reason why there are so many denominations and practically we can see that there are even several versions of the Bible. In fact the very last statement in the Bible issues a warning to anyone who would change any of the written word. This indicates that such things can be subject to change. Man, however may change things to satisfy his own whims but the Truth cannot be changed and the Holy Spirit within gives one who is truly sincere the intelligence to discern. This statement may come as a suprise but please forgive me for I am only wanting to fully understand what Lord Jesus is conveying to us. After honestly examining the issue it appears that there have been several major alterations to the original Christian teachings. Perhaps you may know but originally in early Christianity there was much opposition from the governors of the Roman empire. Converts of early Christianity were under heavy opposition and severely persecuted for their faith. As Christianity popularized it became evident that large masses were supporting and thus for the political purpose of power and influence the Roman government decided to adopt Christianity as the official religion of the state.

2 Responses to Letter to A Catholic Monk