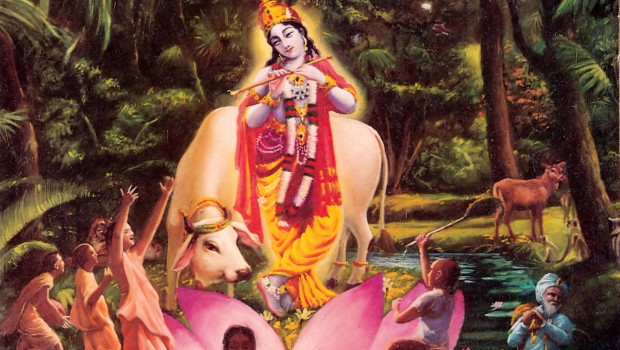 The International Society for Krishna Consciousness is a movement aiming at the spiritual reorientation of mankind through the simple process of chanting the holy names of God. The human life is meant for ending the miseries of material existence. Our present-day society is trying to do so by material progress. However, it is visible to all that in spite of the extensive material progress, the human society is not in a peaceful condition.

Prabhupada: I shall speak. Record it. “Manifesto of Krsna Consciousness.” The International Society for Krishna Consciousness is a movement aiming at the spiritual reorientation of mankind through the simple process of chanting the holy names of God. The human life is meant for ending the miseries of material existence. Our present-day society is trying to do so by material progress. However, it is visible to all that in spite of the extensive material progress, the human society is not in peaceful condition. The reason is that a human being is essentially a spirit soul. It is the spirit soul which is the background of development of the material body. However the materialist scientist may deny the spiritual existence in the background of the living force, there is no better understanding than accepting the spirit soul within the body.

The body is changing from one form to another, but the spirit soul is existing eternally. This fact we can experience even in our own life. Since the beginning of our material body in the womb of our mother, the body is transforming from one shape to another in every second and in every minute. This process is generally known as growth, but actually it is change of body. On this earth planet we see change of day and night and of seasons. The more primitive mentality attributes this change to changes occurring in the sun.

For example, in the winter they think the sun is getting weaker, and at night they presume sometimes that the sun is dead. With more advanced knowledge of discovery we see that sun is not changing at all in this way. Seasonal and diurnal changes are attributed to the change of the position of the earth planet. Similarly, we experience bodily changes from embryo to child to youth to maturity to old age and to death. The less intelligent mentality presumes that at the death the spirit soul’s existence is forever finished, just like primitive tribes who believe that the sun dies at sunset.

Actually, the sun is rising in another part of the world. Similarly, the soul is accepting another type of body. When the body gets old like the old garments and is no longer usable, then the soul accepts another body just like we accept a new suit of clothes. The modern civilization is practically unaware of this truth. They do not care about the constitutional position of the soul. There are different departments of knowledge in different universities and many technological institutions to study and understand the subtle laws of material nature- medical research laboratories to study the physiological condition of the material body- but there is no institution to study the constitutional position of the soul.

This is the greatest drawback of material civilization, which is external manifestation of the soul. They are enamored by the glimmering manifestation of the cosmic body or the individual body, but they do not try to understand the basic principles of this glimmering situation. The body looks very beautiful working with full energy and exhibiting great traits of talent and wonderful brain work. But as soon as the soul is away from the body, all this glimmering situation of the body becomes useless. Even the great scientists who have discovered many wonderful scientific contributions could not trace out about the personal self, which is the cause of such wonderful discoveries. The Krsna consciousness movement basically is trying to reach this science of the soul–not in any dogmatic way, but in complete scientific and philosophical understanding.

You can find out the background of this body as the soul and the soul’s presence as perceived, perceivable by consciousness. Similarly, the presence of Supersoul and superconsciousness in the universal body of cosmic manifestation is perceived by the presence of the Supreme Lord, or the Absolute Truth. The Absolute Truth is systematically experienced in the Vedanta-sutra, generally known as the Vedanta philosophy, which is elaborately explained by a commentary by the same author of the Vedanta-sutras known as the Srimad-Bhagavatam. The Bhagavad-gita is the preliminary study of the Srimad-Bhagavatam to understand the constitutional position of the Supreme Lord, or the Absolute Truth.

Krsna means all-inclusive, or, in other words, Krsna is simultaneously Brahman, Paramatma, and the Personality of Godhead. As such, as every one of us is simultaneously consciousness, soul, and person, this individual person and the Supreme Lord Person are qualitatively one but quantitatively different. Just like the drop of sea water and the vast mass of sea water- both are qualitatively one. The chemical composition of the drop of sea water and that of the mass of sea water are one and the same, but the quantity of salt and other minerals in the whole sea is many, many times greater than the quantity of salt and other minerals contained in the drop of sea water. The Krsna consciousness movement maintains the (sic:) speciality of the individual soul and the Supreme Soul. From the Vedic Upanisads we can understand that both the Supreme Person, or God, and the individual person are eternal and living entities. The difference is that the supreme living entity, or Supreme Person, maintains all the innumerable living entities. In the Christian way of understanding, the same principle is admitted because in the Bible it is taught that the individual entities should pray to the supreme father for supplying means of maintenance and giving pardon for their sinful activities.

So it is understood from any source of scriptural injunction that the Supreme Lord, or Krsna, is the maintainer of the individual living entities, and it is the duty of the individual entity to feel obliged to the Supreme Lord. This is the whole background of religious principle. Without this acknowledgement, there is chaos, as it is happening in our daily experience at the present moment. Everyone is trying to become the Supreme Lord, either socially, politically or individually. Therefore there is competition for this false lordship and there is chaos all over the world, individually, nationally, socially or collectively. The Krsna consciousness movement is trying to establish the supremacy of the Absolute Personality of Godhead.

The human society is meant for this understanding because this consciousness makes his life successful. This Krsna consciousness movement is not a new introduction of the mental speculators. Actually this movement was started by Krsna Himself in the Battlefield of Kuruksetra. At least five thousand years ago the movement was presented by Krsna in the Bhagavad-gita. From this Bhagavad-gita we can understand that this system of consciousness was spoken by Him long, long before- He imparted to the sun-god Vivasvan. That calculation goes to show that before the repetition of the Bhagavad-gita in the Battlefield of Kuruksetra, it was once before explained at least forty million years ago.

So this movement is not at all new. It is coming down from disciplic succession, and in India from all great leaders of the Vedic society like Sankaracarya, Ramanujacarya, Madhvacarya, Visnu Swami, Nimbarka, and lately, about 480 years ago, Lord Caitanya. The principle is still being followed today. This Bhagavad-gita is also very widely persued in all parts of the world by great scholars, philosophers, and religionists. But in most cases the principle is not followed as it is. Krsna consciousness movement means to present the principles of the Bhagavad-gita as it is, without any misinterpretation.

Just like pouring water down from the cloud is pure, distilled water, but as soon as the water comes in touch with the earth it becomes muddy immediately. Again, by filtering the same water, the original clearness can be regained. Similarly, Krsna consciousness movement is the process of clearing the consciousness, and as soon as the consciousness clear and pure it is transferred to the spiritual world for eternal life of knowledge and bliss, which we are hankering for in this material world, and being frustrated in every step on account of material contamination. Therefore this Krsna consciousness movement should be taken very seriously by the leaders of the human society. (devotees offer obeisances)
So,

This Krsna consciousness movement, or a person’s Krsna consciousness, can be progressively improved by six processes. What is that? Utsaha, enthusiasm. Dhairya. Dhairya means patience. Utsahan, dhairyat, and niscayat, firm conviction. Utsahan dhairyat niscayad tat-tat-karma-pravartanat. And following the regulative principles.Sato vrtteh. The profession must be strictly honest and serious. Sato vrtteh. And sadhu-sange, and in the association of the devotees. So you attempted today a press conference, but don’t be dejected. We have to become patient, and we must be firmly convinced that our movement shall be successful, provided if we follow the regulative principles. Sato vrtteh and sadhu-sange. Sadhu-sange means in the association of the devotees. So there is nothing to be dejected. You try and follow the principles. It will come out successful without any doubt.
Thank you. Yes?Tamala Krsna: We have prepared a very large feast.
Devotee:: Haribol!
Prabhupada: That’s all right. You eat. It is, today is a adivas (?) day. Adivas day means the inauguration. Inauguration day. So you shall prepare the large feast every day and chant every day and eat prasadam every day. This is the inauguration day. (laughter) Yes. At least, make your program that every day in the evening, from seven to eight, at least one hour this kirtana will go on. I’m very glad that Visnujana chants very nicely, and you also, one after another. So every day make chanting at least for one hour in the temple. And do your activities as usual. Don’t be disappointed. Krsna will see His own business. So you have prepared large feast. You eat. What is there?

Virabhadra: A thousand people in this room?

Prabhupada: Ekas candras tamo hanti na ca tarah sahasrasah. If we can, I mean to say, raise one person Krsna consciousness, that means we have successfully preached our mission. One moon is better than millions of stars. Hare Krsna.

Tamala Krsna: We can have kirtana and soon the prasadam will be ready.