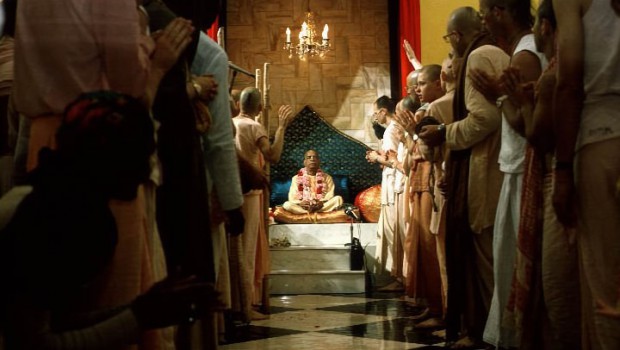 Prabhupada: Who was he? Who was Sarvabhauma Bhattacarya?

Nandarani: He was a great impersonalist who was converted by Lord Caitanya to Vaisnavism.

Prabhupada: Yes. And Nandarani knows better than you. (laughter) So girls are intelligent. Yes. Sarvabhauma Bhattacarya was a great impersonalist and a great logician. The impersonalist school, amongst them, there are very, very learned scholars. Sankaracarya himself, he was unique scholar. At the age of eight years only, he studied all the Vedas. And not only he studied, he became a critical student, Sankaracarya. He was incarnation of Lord Siva; therefore nobody can be compared with him.

So amongst the impersonalist school, there are many great logicians and high class scholars. But according to Vedic principles, God realization does not depend on material intelligence or scholarship. It is stated in the Vedas, nayam atma pravacanena labhyah: “You cannot realize the self simply by arguments or very scholarly speeches.” No. Nayam atma pravacanena labhyo na bahuna srutena: “Neither by studying many, many different types of Vedic literatures.” Nayam atma pravacanena labhyo na bahuna srutena na medhaya: “Neither by sharp brain or memory.” These are good qualifications–to be scholarly, to be a very good speaker, and to have very good memorizing power. These are materially very good qualifications. But they are not qualification for realizing God. Then what is the qualification of realizing God? Yam evaisa vrnute tena labhyah: “God can be realized only to whom He reveals.” You cannot oblige God to become manifest before you because you are very good scholar or you are a very rich man or you are very good looking or you have got very good memorizing power. No. Yam evaisa vrnute. When He is pleased, then He reveals unto the devotee. Therefore our business should be, for God realization, to please Him. And that pleasing process is this devotional service. Let us engage in His service, and when He becomes pleased, “Yes. He’s very sincerely…” Just like the gopis. They were village girls, not even born of very high family. Cowherds, ordinary agriculturists, cowherds men. So their daughters. So how much education you can…? There was no education practically. In the village even men… In India still, they are ninety-percent illiterate. And what to speak of the girls, the men are not even literate. Because according to Vedic civilization it was not necessary that everyone should go to school. There was no necessity. Because things were being learned by sruti, by aural reception. Knowledge from the perfect man, one would hear, and he would become learned. There was no necessity of, I mean to say, learning ABCD. No. Even in Vedic age, everything was memorized. There was nothing in writing. People were so sharp in brain that once heard from the spiritual master, they will never forget. The brahmacari system made their brain so powerful that whatever they will hear from the spiritual master, they will keep in the brain and never forget. They will repeat verbatim. Smrti. It is called retaining power.

So God realization does not depend on material opulence. Material opulence means to take birth in high family, janma. Janma means high parentage. Then… Janmaisvarya, and wealthy, great riches. These are material opulences: high parentage, great riches, and great learning, and great beauty. These four things are material opulences. Janmaisvarya-sruta-sri. Janma means birth, aisvarya means wealth, and sruta means education, and sri means beauty. So for God realization these things are not essential, but Krsna consciousness movement can utilize everything. So nothing is neglected. That is another point. But if somebody thinks that “I have got all these opulences; therefore God realization is very easy for me,” no, that is not. So God realization depends on God, because God, you cannot oblige God by some force. Just like if you have got money, oh, you can do anything nowadays. If you have got strength of wealth, you can have any power, you can do anything. But that does not mean that you can purchase God. No. That is not possible. If you have got beauty, you can conquer over very stalwart, very strong men. Just like what is the… Cleopatra. You have heard the Grecian history. She was very beautiful, and she conquered many great warriors. So beauty sometimes can conquer even the greatest man, but that does not mean beauty can conquer God. No. That is not possible. So the vairagya-vidya-nija-bhakti-yoga. To conquer God is bhakti. If you are advanced in devotional service, then you can conquer God. Just like the gopis, as I was speaking, their parentage was not very high, not at all high. Village, agriculturists, farmers, no education, practical… No education at all. And they were not rich at all. Agriculturists, farmers, they are not very rich. So how they conquered Krsna? Krsna was just a play toy in their hands. Gopi-bhava-rasamrtabdhi-lahari. They conquered Krsna simply by devotional service. That’s all. They did not know anything except Krsna. They did not, I mean to say, care anything. Simply they were…, always they were thinking of Krsna. The one instance of their absorption in Krsna consciousness is explained, that when Krsna was going on the pasturing ground, the gopis were crying at home. Why? They were thinking that “Krsna’s body is so delicate, so soft, that we, when we take His lotus feet and place on our breast or chest, we think it is hard, very hard for Him. So Krsna is walking in the forest. There are so many particles of stones. They are pricking, and how much Krsna is feeling pain.” This thinking made, caused their crying, “How Krsna is feeling pain.” And the whole day, they will think of Krsna like that, and when Krsna will come back from the pasturing ground, then they will be relieved that “Krsna has now come back.” This was their business. Now, this sort of thinking of Krsna does not require any riches or any high parentage or any beauty or any education. So we have to develop such Krsna consciousness. Our, this Gaudiya-sampradaya, Caitanya Mahaprabhu’s, in Caitanya Mahaprabhu’s descendants, our line of God realization is that separation, feeling of separation. Not that we have got Krsna within our hand. No. The feeling of separation, worship of Krsna by feeling of separation is better than the worship by directly meeting. Vipralambha-seva.

Prabhupada: Oh. What is the price of this?

Prabhupada: No. What do they sell?

Gargamuni: Oh. This drum was broken, but he gave it to us free. I do not know what the…

Prabhupada: It was, it is broken?

Gargamuni: It was broken, but we fixed it.

Prabhupada: Oh. All right. When they give in charity, they give something broken. (laughter) (Bengali) Khana goruke brahmanake dana (?). In India there is a…, charity is given to the brahmanas. So a man saw that his cow is blind. “All right, give it in charity.” So charity means… Charity should be the first-class thing if it is really charity. But nowadays people give in charity just for name. “Oh, I am giving something.” This charity… You have read Bhagavad-gita. There are three kinds of charity: sattvic, rajasic, tamasic. Sattvic, charity in goodness, is with due consideration that “Here should be given the charity.” Just like the Vedic injunction is to give charity to the brahmanas. Why? That is the worthy place, to give charity in the hands of brahmanas and Vaisnava. Real brahmanas. I don’t say caste brahmana. Because they will employ whatever you give them in the service of the Lord. Therefore charity, that is sattvic charity. There is no question of profit or name. But, “Charity should be given here. Here is something, God’s service.” That is sattvic. And rajasic means for the sake of name. “Oh, people will say I am so charitable.” That is rajasic. And tamasic, one who does not know where the money is going… Just like in the Bowery Street some, that drunkard comes and polishes the motorcar, and somebody gives five dollars, and he immediately goes to drink. That means this charity means give him impetus for drinking. So if charity creates such drunkard, oh, that is very dangerous. He has to suffer, the man who is giving in charity. Therefore in charity also there must be consideration. It must be sattvic. So anyway, it has come here. So it is sattvic. Whatever his mind may be, anyway, he has given to this temple; so it is sattvic. Chant. (end)