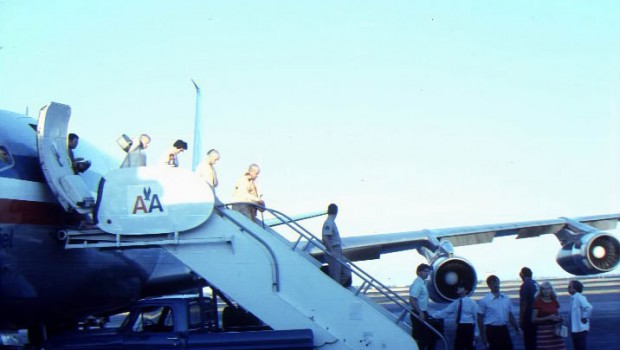 This is good literature. It should be encouraged. People will become sane, understand what is his constitutional position. If this literature is distributed and people read it carefully, there will be no more crime.

Man reporter: Swami, why are you here?

Jagadisa: Why are you here? (laughter)

Prabhupada: This is my home. (laughter) I have got so many children, grandchildren. So I have come to see them. (break)

Woman reporter: Have you any comment about the lawsuit that the sect here is involved in with regard to whether they should be allowed to sell literature and collect donations?

Prabhupada: Certainly. This is good literature. It should be encouraged. People will become sane, understand what is his constitutional position. Otherwise in your country, the other day I saw in the Times paper, they are very much perturbed, “Crime, what to do?” They are thinking. So if this literature is distributed and people read it carefully, there will be no more crime. They will be all saner to understand, self-realized souls. At the present moment people are misguided, accepting the bodily concept of life.

Jagadisa: The reporters don’t seem to have many questions. If you like you can speak.

Jagadisa: If you like, you can speak or we can go.

Prabhupada: You want me to speak? I can speak. Shall I speak? Yesterday in San Diego one press representative met me. So I told that America is advanced in material civilization, all comforts of bodily concept of life. But why the American young men are becoming hippies and crazy. Yesterday, I saw, some of the girls came almost naked. So why they are dissatisfied in spite of so much material advancement? They have got enough food, enough shelter, enough clothing, enough cars and everything. There is no scarcity. Why they are disappointed? Can you answer, why they are disappointed? It means they requires spiritual fulfillment of desire. That is the nature. When in the primitive stage of life, a man is concerned about the bodily comforts. And when one is advanced or satisfied–not satisfied; advanced–in our bodily concept of life, the next question is about spiritual life. So America is in that point, specially. So unless you fulfill their spiritual needs, they will remain in such disturbing condition. So I compared it just like there are many zeros: one zero, two zero, three zero, or hundreds and millions of zero. All these zeros together–the value is zero. But if there is one, then one and zero, it makes 10. The ten times of one value increases. Another zero, it is hundred. Another zero, it is thousand. Similarly, this material advancement of America, if it is added with God consciousness, then the value will increase. Otherwise, it will remain zero. You may advance materially as far as possible. but if you don’t take God consciousness or Krsna consciousness, then the value of all this material advancement is equal to zero. Nobody will be satisfied. So therefore this Krsna consciousness movement should be taken very seriously. It is the finishing touch of American advancement of material comforts. Then people will be very happy, and America is already leader of the world. They will be first-class leader. The world will be benefited, and you will be benefited. And my endeavor will be also successful. Don’t keep yourself in zero. Take the one. Then it will be very nice. Just like… You can understand very easily. This life, very important man, but if there is no spirit soul, it is zero. It has no value. However an important man may be, when the spirit soul is out of the body, it is a lump of matter; it has no value. Anything you take–this machine, that machine, any machine–if somebody, some spiritual being, some living being is not tackling it, what is the value? No value. Therefore, everywhere this spiritual consciousness must be there. Otherwise it is zero.

Woman reporter: Would you comment on the political situation in India now. What do you think about Mrs. Gandhi’s…?

Prabhupada: Well, we are not very much concerned with political situation. But our proposition is–either political, social, economical or philosophical, anything–without Krsna, it is all zero. So far Mrs. Gandhi is concerned, she is inclined to some spiritual understanding. So actually if she becomes very advanced spiritually, then this emergency situation will improve. Otherwise… and it is the public opinion against democracy. So democracy is not very much beneficial anywhere and everywhere. In your country also, you voted Mr. Nixon, democracy, but you were not satisfied with him. That means democracy, ordinary men they select somebody and again they try to bring him down. Why? When he was selected, it means it was a mistake. So according to Vedic civilization, there was no such thing as democracy. It was monarchy, but the monarchy means the king was very highly spiritually advanced. The king was called rajarsi, means king, at the same time, saintly person. We have got another example in our country–Gandhi. When he was political leader, he was practically dictator, but because he was a man of very high moral character, people took him, accepted him as the dictator. So dictatorship is good, provided the dictator is highly qualified spiritually. That is the Vedic verdict. The battle of Kuruksetra was there because Lord Krsna wanted rajarsi, Yudhisthira, should be on the head. So the king is supposed to be the representative of God. So he must be a godly person. Then it will be successful. That’s all right. (end)