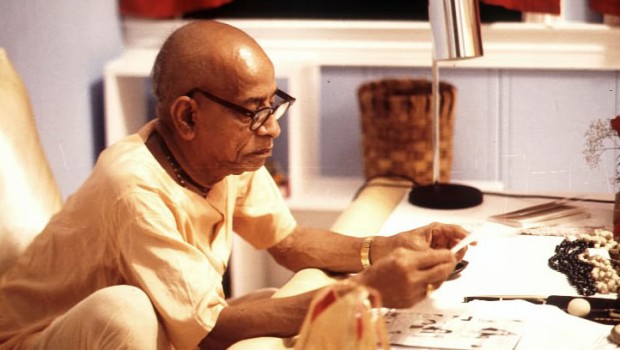 Published on May 13th, 2021 | by daily-devotions--dravinaksa-dasa | Full size image

Read and Read Again–Simply That Vibration Will Help Us

Devotee: I have though of doing Bhaktisiddhanta Sarasvati’s Brahma-samhita. Do you think we could serialize it maybe in three or four Back to Godheads? Or could we print it ourselves in a little pamphlet? Or which do you think would be better?

Devotee: Why don’t you write some purports to Brahma-samhita? Some of us have difficulty understanding Bhaktisiddhanta Sarasvati.

Prabhupada: Yes. If I get time… My time is very limited. So even there is difficulty, let them read over and over and again. Then they will understand. Why should we change it? Let it be presented as Bhaktisiddhanta Sarasvati has given. Then don’t give more than one or two pages at a time. Their brain will be puzzled. (laughter) Yes. When Guru Maharaja was speaking, at least my brain was puzzled. (laughter) Even he would speak in Bengali, it was very difficult to understand. He was speaking from a very, very high platform. But I wanted to hear him. That’s all. Even I did not understand it. That he appreciated, (laughs) that “This boy does not go away. He hears.” Actually that was my position. In the beginning I could not understand what he was speaking, but I wanted to hear him. That’s all. I was very much anxious to hear him. That he marked. And he was kindly pleased on me, that “He wants to hear. He does not go away.” That was my policy, that “let me hear. Even I do not understand, let me hear.” That’s all. Yes. Actually I did not understand in the beginning what he was speaking. So Bhaktisiddhanta’s writing is not very easy to understand. But we should try, read and read again, and simply that vibration will help us. That’s all. It is transcendental vibration, not that everyone will understand. But if you simply give aural reception to the vibration, that will make him advanced, not exactly that anyone has to understand it. Just like a man is sleeping and somebody is calling him. In his sleeping condition he does not understand. By calling, calling, calling, he gets up because that vibration is there. Not that in his sleeping condition he is understanding what is this sound. So similarly, we should give reception to the transcendental vibrations made by Krsna and His bona fide representatives. That will make us awakened. Not that we understand everything.

I worship Govinda, the primeval Lord, whose glory ever triumphantly dominates the mundane world by the activity of His own pastimes, being reflected in the mind of recollecting souls as the transcendental entity of ever-blissful cognitive rasa.