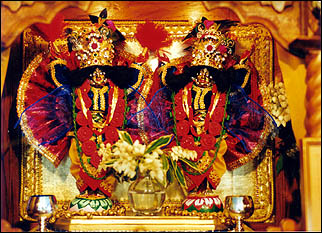 On Janmastami day, I met a young Indian lady and I asked here if she knew what this day was and she said promptly, it’s Janmastami!! She then asked me if I was fasting? At which point I knew this was a good candidate to invite to our temple. Turned out their family was from the Vrndavana area in India–talk about Krishna’s mercy!!!!

Obeisances All glories to His Divine Grace Srila Prabhupada

So once again , Krsna has blessed us with such a nice festival for His Transcendental appearance day as well as His pure devotee Srila Prabhupada. Many devotees came from all over and its good to know that the transcendental grapevine still works by letting others who never came here also know of our whereabouts.

On Janmastami day, I was at a Fred Meyer store and the checkout clerk was a young Indian lady and I asked here if she knew what this day was and she said promptly, it’s Janmastami !! She then asked me if I was fasting? At which point I knew this was a good candidate to invite to our temple which she knew nothing about-and which in fact, she and her mother did come. Turned out their family was from the Vrndavana area in India–talk about Krsna’s mercy!!!! And that’s how the whole two day event went. Everyone was blissful, stuffed with sufficient amounts of prasadam enough to make you wobble, and re-determined and renewed to continue their practice of Krishna Consciousness.

Between my wife and I we prepared around 145 offerings for Krishna. Many other devotees also brought opulent preps. My wife made two very beautiful and very opulent matching backdrops for our altars. After I finished bathing and dressing the Deities, Sukadev and I were observing Their obvious beauty, and then I said, “yes, the Deities look beautiful but everything is complete when the temple room is filled with Krishna devotees.” And Prabhupada has commented that the surrendering process is completed by the association of devotees–without which advancement is practically impossible. So when we have these festivals, all the devotees become enlivened by each others association and the Krishna katha which flows.

One simple thing is needed to continue these festivals of Krishna Consciousness-and that is that seemingly elusive quality of “co-operation”–without which Prabhupada has stated we have no love for him despite our jargon or rhetoric. Later in the evening, there were so many devotees here who could sing and play instruments nicely, that about 6-7 of them all got opportunities to lead some kirtans/bhajans with the others following along. This is also nice. Not that one person controls the whole program–what is better is if everyone can take part and participate. The next day(Vyasa Puja), as usual, there was a much smaller crowd of devotees for various reasons. But this smaller crowd was not the least any less sweet. We talked for about two hours about Srila Prabhupada and many related various stories about their personal reciprocations with Prabhupada over the years. We offered Prabhupada arotik and puspa puja along with some nice garlands. Sukadev Prabhu who had cooked for Srila Prabhupada when he was Temple President in Hawaii, again cooked for Prabhupada on this day as he had then–He made rice, chappatis, dahl–the same way he did then and the way Prabhupada told him was acceptable.

So all these activities, chanting ,dancing, cooking and feasting, hearing, etc–these are all nectar and we never tire of them.They are highly powerful spiritual practices which lead one to God Consciousness–and-they are blissful………………

Hari Bol to you all your humble servant Damaghosa das

(Oh, by the way, we are buying a country property in about one month-anyone interested in coming?)