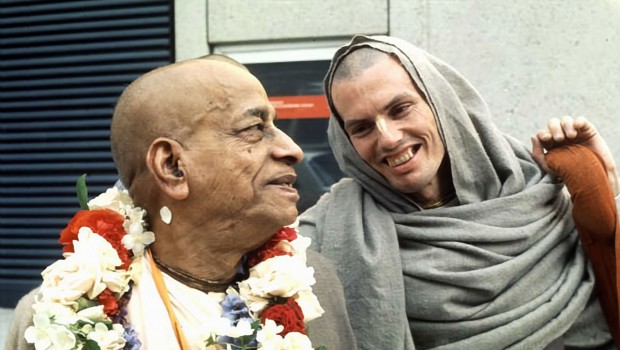 For many years now, Hansadutta’s routine has been to arise for brahma-muhurta, wash in the woods with a garden hose and begin his morning devotions – aratik to his beautiful Deities and chanting 16+ rounds – by 5:00 am. At about 7:00 last Tues., he made a phone call stating that he was having a pain in the chest. When the ambulance arrived at his retreat, the paramedics found him prostrated as if in obeisances, yet unconscious, before his beautiful Jaipur Radha-Krishna, Shri Chaitanya and Shrila Prabhupada murtis, his fingers around his japa-mala.

He was taken to the hospital in critical condition, yet defied the odds by awakening the following day to the delight of his family and friends. When he awoke he was chanting the sacred Hare Krishna mahamantra, the only means of casting off nescience in this dark age of Kali Yuga. Then he mentioned that this material world of mrityu-loka is but a place of suffering, and that the only real need of the jiva is to immediately return Back to Home, Back to Godhead in pursuance of Shrila Prabhupada’s wishes. He is recovering in the hospital, and the prayers and support of his many friends and fellow Prabhus are much appreciated. His family members have mentioned that too many phone calls will be overwhelming, considering especially the youthfulness of his three children.

I had the honor of Hansadutta’s good association on the day before the incident when he came to San Francisco to pay me an all-day visit. We enjoyed prasadam together and discussed the usual katha: Shrila Prabhupada’s ultimate plan for us. In short, this is what he said: “Prabhupada is trying to make us into pure devotees at every step, but we are one and all foolish and rascal sons who cannot obey even the basic, simple instructions of our Guru Maharaj. Following Prabhupada requires utmost concentration at every step.” This katha between us, sometimes joking, at other times profound, went on for several hours. A few other devotees, Nara Narayana, who is also known as “The Vishwakarma” (and his son Kuva) and Vaikuntahnath also happened to gather there quite by chance. Hansadutta, Nara Narayana, Vaikunthanath and I have all known one another as good friends and Prabhus since the 1960’s. While we were there, my neighbor, the Bay Area’s most popular young-audience radio talk show host, happened along. Hansadutta picked him out as a future devotee and, giving him several books, preached the eternal message of Shri Chaitanya Mahaprabhu for sometime.

The next day, the talk show host mentioned to his radio audience of 350,000 listeners that Krishna consciousness must be genuine, or why would Hansadutta be so attached to its beliefs,preachings and principles for over thirty-five years? It is a sad irony that while this was being spoken on the radio, Hansadutta was on his way to the hospital. Hansadutta joined ISKCON in 1967 and quickly became a world sankirtan leader, leading harinama parties throughout North America, Europe, and Southeast Asia. In Montreal, he trned a bowling alley into a temple, one of ISKCON’s first. In Germany he bought a huge castle, the Schloss Rettershoff, and turned it into a gala Radha-Krishna mandir to Prabhupada’s delight. He printed millions of Prabhupada’s books at every chance, each in a very attractive format. To this day he is an advocate for the pre-1977 versions of each one of Prabhupada’s transcendental literatures. In Shri Lanka he publicly challenged and disgraced that country’s foremost atheist.

I stayed with him in Vrindavana in the mid-70’s when he chanted 64 rounds daily and ate only once, which he cooked himself. He helped make many thousands of devotees all over the world, even some members of the VNN staff. Before retiring to his kutir, he always enjoyed stirring up controversy, yet was always Krishna-centered in every way. He often says, “Only two rules: Always Remember Prabhupada, and Never Forget Prabhupada.” Indeed, his personal file contains over 150 letters from Shrila Prabbhupada from 1967 to 1977. From the hospital, he sends his appreciations for the good thoughts and prayers of all the well-wishing devotees of Krishna while he continues to recover. This is the message he sends, “Life is uncertain at best. This world will pass. Please, whatever you do, just chant Hare Krishna and follow the instructions in Prabhupada’s books. This alone can and will save us.”