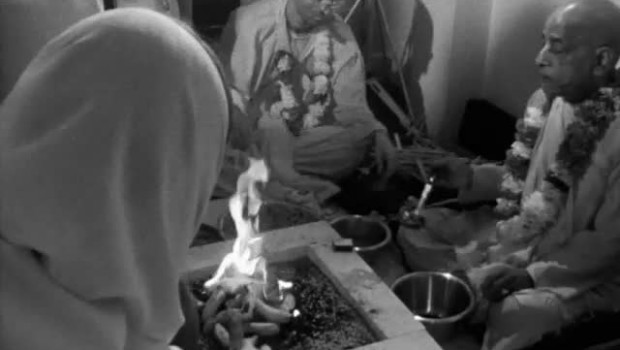 A spiritual master who knows the absolute truth arrives on time in a blue Volkswagen combivan. For members of the Hare Krishna movement it’s the first coming. For the press, just another Indian mystic, and for the Paddington mob, another curious visitor.

His Divine Grace founded the International Society for Krishna Consciousness in 1966 but it is said that his disciplic succession can be traced back directly for five hundred years. According to his followers he is the divine representative of God and he is completely pure.

Basically the movement he heads is austere and exclusive. Alcohol, tobacco and sex, other than for procreation, are frowned upon and diet is strict and simple. Disciples surrender everything they own when they join the movement and they survive on money from publications, donations and they say, “Krishna.”

Prabhupada: God, or Krishna, is all-pervading. From His energy the five elements, material elements…

The history of the movement they say can be traced back five thousand years when Krishna first spoke the truth in India.  These days the headquarters are in Los Angeles where, according to one member, there are more frustrations.

But today they say the most perfect person in the world is in this Paddington flat and the fifty members of the Sydney branch are ecstatic. Today, say the disciples, is a day of rejoicing and of peace, love and humility.

But behind the facade there is some conflict and some sadness. Sheryl Zimmerer is eighteen, she tried university and a job in Treasurery
before leaving both to join the sect a few months ago. Today, after her initiation by the spiritual master, she says she has found true happiness. But her mother and her aunt are not so sure. For them the ceremony represents an alienation from the type of life they hoped Sheryl might lead.

Mother: Well I’m not happy with it, I don’t go along with it, but it’s her life, it’s what she wants. So my husband and I make the best of it.

What worries you about her being initiated?  –Her future.

Mother: Her whole future and the fact that they are teaching them not to have sex. I came here last night and the spiritual master was telling them that to have sex is like animals. Well this isn’t the way I’ve brought my children up. When I hear this sort of think I wonder what her future is.

She has given up university to do this, she’s given up everything, she’s not working and I can’t see any future in it at all. What’s going to happen in ten years time?

And what religion are you, can I ask?  –Church of England. And do you feel that…

She’s been christened, she’s been confirmed in our own church and she’s suddenly turned to this in a matter of two months.

What do you think has attracted her most of all about this?

Well she’s been looking for something, she’s and introvert, and she’s felt that she’s wanted more out of life than she’s been getting.

She’s obviously getting it isn’t she because she seems very happy since she has been here.

Her ideas coincide with these peoples’ ideas and I think they are very good living people. They are very sincere in their ideas, but they are not my ideas.

No, I can’t see the point of doing this.

Sheryl why do you in fact prostrate yourself like that.

Well, yes, I’m worried that she is worried but I don’t think that she should be because you can see that there is peace and happiness there. Everybody has one goal. There’s no bad relationships in the temple. People realize that we are all spiritual souls, all part of Krishna.

Do you feel that she could have spiritual happiness and peace with herself without doing this?

Of course. I thought that’s what she was getting at home.

I mean we love her very much at home. She’s been brought up to the Christian religion. But there just seemed to be something lacking somewhere.

This is a very hard question but if your parents wanted you to come home and to perhaps ignore all this and to perhaps get married like most normal eighteen year old girls, what would you do?