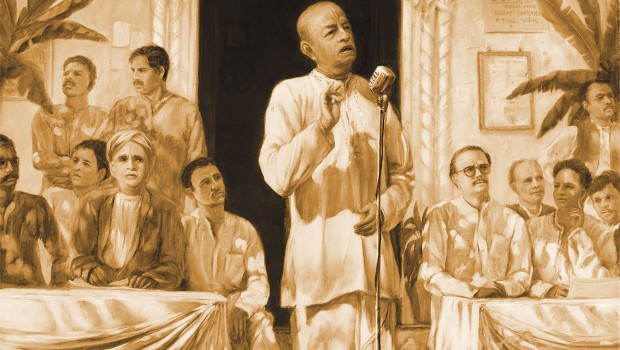 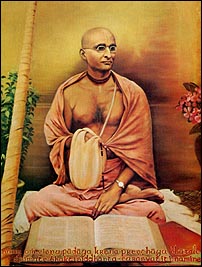 If everyone just initiates then there will only be a contradictory result. As long as it goes on there will be only failure. O shame! My dear brothers, aren’t you embarrassed? In the manner of businessmen you increase your disciples.

A Vyasa-Puja offering of five prayers glorifying special characteristics of Srila 108 Bhaktisiddanta Saraswati Goswami Thakura. Presented on the commemoration of his appearance, by His Divine Grace A.C. Bhaktivedanta Swami Prabhupada, at the Radha-Damodara temple, Vrindavana, India, in 1961.)

48. Give up your stubbornness, there is no time. Come all my brothers on this auspicious holy occasion.

49. When will that day come when there will be a temple established in every house in every corner of the world?

50. When the big court judge will be a Gaudiya Vaisnava with tilak beautifully decorating his forehead.

51. A Vaisnava winning votes will be elected president of the land and preaching will spread everywhere.

53. The demons want so many plans just to cheat the people. They sell wheat flour at 32 rupees a mound.

54. Will opening a factory fill a hungry man’s belly? Being oppressed by starvation they will eat grass and mango pits.

55. Wearing a two pisa string a man is called a brahmin. Wearing a saffron cloth he has become a sannyasi.

56. The householders beg from sannyasis, and why not? The sannyasis have tens of millions of rupees in the bank.

57. As the days pass, the influence of Kali-yuga increases and the poor are crying in distress.

58. Ten thousand cows are killed daily and the nations expert leaders are all eating untouchable foodstuffs.

59. People of muddy intelligence increase day by day. A man and his wife separate on mere word.

60. Everyone has become a witch by the influence of this age. Everyone is unhappy due to the absence of the mercy of the Vaisnavas.

61. The Vaisnavas are famous as “para dukha dukhi.” This fame will increase as the preaching increases.

62. If eternally pure devotional service to Krsna is awakened in everyone, then Kali will flee, screaming of his own accord.

63. “Praninan upakaraya” do work for the benefit of all living beings. This is Mahaprabhu’s teachings. This is the storehouse of happiness in this life and the next.

64. So much work has fallen into your hands, so gather together and do it.

65. Vasudeva Datta said to the Lord, paying his obeisances, save all the living beings in the material world.

66. Give all their sins and suffering to me, who am the lowest of all. In this way all the suffering and miseries of the fallen will end.

67. He was the best of the Vaisnavas, para dukha dukhi. He knows that there is not real happiness in gratifying the senses.

68. And what kind of mercy can the non-Vaisnavas give? They simply make offenses by their Daridra Narayana philosophy.

69. The mercy of the Vaisnavas is scientific and authorized, without their mercy this world is simply insurmountable maya.

70. If there is a kingdom of Visnu and Vaisnavas on the surface of the earth, then the world will be happy–so say the great sages and rishis.

71. Why is everyone crying for Rama-rajya? The only way it can be had is if there is a Visnu centered kingdom.

72. Lord Krsna enthroned King Yudhisthira; then the whole world was rich and fortunate due to the qualities of a Vaisnava.

73. The streams, rivers, trees and fields and mountains, were all full of fruits and flowers. The milk laden cows were floating in abundant milk.

74. The birds, beasts and lower creatures were all non-envious. Material life in the Vaisnava kingdom was regulated and perfect.

75. All immersed in bliss, singing the glories of the Hari. The hearts of Vaisnavas dance in ecstasy to see this.

76. The entire world is filled with the use of material objects, without a trace of devotion to the Lord.

77. Still they are searching after peace. Preach Krsna consciousness; fulfill their desires.

78. Today my brothers, get to this task. Save the battered souls by your preaching.

79. Srila Prabhupada, please be merciful today. This time have compassion. You are not a conditioned soul of this material world.

80. Whatever independence we have, let it be cast to the waters. The lowly Abhay offers this presentation today.