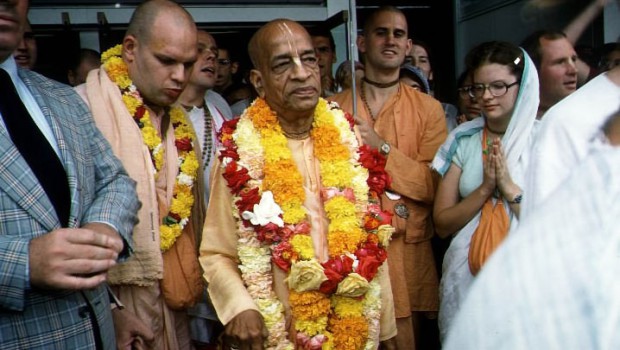 I have been reading the articles on this website for at least a few years now and it has given me great spritual benefit. I do agree that there are so many bogus guru’s out there I am looking for a guru as well, but I still think that there must be a living guru to approach.

Thank you very much for reading the articles on www.krishna.org and I am happy that you feel you have received great spiritual benefit from these articles.

You say you agree there are so many bogus gurus but you think there must be a living guru to approach and can I recommend one. Firstly this idea of “living guru” is very offensive. If you are talking about “living gurus” then we have to assume that you consider that Srila Prabhupada is not in the category of a “living guru,” that he is a “dead guru.” This is most offensive and it is not your fault for thinking in this way but this is the philosophy that many so-called spiritual organizations are spreading. So there is no question of a “dead guru.” The spiritual master lives in two ways, one is his physical form which may be appreciated at some time and no longer appreciated, however the other way the spiritual master is living is through his instructions, his vani. His physical form is called “vapu” and his instructions are called his “vani.” It is more important to associate with the spiritual master by following his instructions than by serving his physical form.

So you lament that you want to approach a “living guru,” you have not yet realized that Prabhupada is living with us still in the form of his instructions and you can associate with him personally by reading his books, hearing his recorded lectures, conversations, morning walks, press conferences, etc and even by watching the video and film recordings of him. So you have the benefit of a bona fide living guru. There is no question of that at all. You simply have to realize the great fortune you have because you are connected with Srila Prabhupada.

Your main concern seems to be initiation. However initiation is a secondary concern. First you have to find a qualified guru, someone who is actually a liberated soul, a devotee on the topmost platform, a devotee who can guide you so you can also ultimately become a liberated soul, a pure devotee. The example given by Lord Caitanya in this connection is that of a creeper. A climbing plant. Krishna consciousness is likened to that creeper, that climbing plant, and the seed of that plant is called the “bhakti latta bija” (the seed of the creeper of devotion). So you know if from your experience that if you want to get the seed of a fruit tree you have to find a plant that is fully developed, fully grown, which is flowering, and producing fruits, and in those fruits you will find the seeds. So getting initiated into Krishna consciousness means getting this seed of bhakti, however, if you want to get that seed first you have to find someone who has the plant of bhakti fully grown in his heart and with that plant producing flowers and fruit, and seeds. Otherwise how can he give you the seed if he does not have the plant of bhakti fully developed within his heart? That is impossible. So only a pure devotee of Krishna can give the seed of bhakti. We have seen many devotees who are for the most part very sincere who have taken the position of guru and tried to give their followers the seed of bhakti through initiation but have failed, because although they may be sincere, sincerity is not enough. One has to be a pure unalloyed devotee of Krishna with the plant of bhakti fully grown within his heart so that plant of bhakti is producing seeds and then he can give those seeds to others. Otherwise no matter how sincere and dedicated he is he is simply cheating his followers. He can not give them the seed of the bhakti-lata plant because that plant is not fully developed in his heart.

And by accepting disciples he has to accept the sinful reactions of the disciples. So if he can not deliver the seed of bhakti the disciples will not be able to give up their sinful activities either and he will become loaded down with so many reactions from his disciples and will ultimately fall down himself.

We have seen this happen with practically every “guru” the GBC has authorized. They may have been sincere devotees, but they undertook a task which they were not able to perform. They offered to accept all the sinful reactions of their disciples and to initiate them even though they did not have the plant of devotion fully developed within their hearts. So they are cheaters. And it is bad for them and bad for their followers.

This idea you are hinting at is there must be a bona fide “living” spiritual master somewhere. This is not necessarily the case. Sometimes a pure devotee is present and sometimes not. I do not think you have fully understood the rarity of pure devotional service. It is not at all common to find someone who is qualified to initiate disciples. To find someone who is a Paramahamsa, an uttama-adhikari, a pure devotee of Krishna on the topmost platform is truly very, very rare. So do not underestimate the great fortune you have in associating with Srila Prabhupada. If you miss this chance of taking the association of Srila Prabhupada you may have to take many, many thousands of births before you get the opportunity to associate with such a great soul again. Maybe many millions or billions of births. Such a great soul is VERY RARE.

It is not that one can rubber-stamp gurus. A guru has to be a pure devotee of Krishna and that is very rarely seen.

So if you are anxious to be initiated there are hundreds of wanabe “gurus” out there who will initiate you right away. But unfortunately they can not give you the seed of the plant of bhakti because they do not have the plant fully-developed within themselves. So they will only exploit you and in the end leave you with nothing. This has happened to thousands of sincere devotees in the past and continues to happen even today.

Krishna has sent you the perfect guru and his name is His Divine Grace A.C. Bhaktivedanta Swami Prabhupada. You simply need to hear from Srila Prabhupada on a regular basis, chant at least 16 rounds of the Hare Krishna mantra daily and strictly follow the four regulative principles: no illicit sex, no meat eating, no gambling and no intoxication. Of course we need to follow the instructions we hear from Srila Prabhupada and be engaged in devotional service 24 hours a day as he teaches us to be. This process will purify our hearts and gradually also Krishna will dictate to us from within our hearts.

Of course it is easy to rattle this off but in reality it is impossible to chant 16 rounds of the Hare Krishna mantra daily and follow the four regulative principles unless we are getting some higher taste, some pleasure from the spiritual platform. There are so many things we need to follow if we want to purify our existence and it is so easy to slip from the path and fall back to our old habits. It is said that spiritual life is like the razors edge. We have to execute it with great care and attention for if we make a little slip then there is blood everywhere. It is a little hard to understand with today’s razors. But in the past they would shave with cutthroat razors which were just a very sharp hard steel blade. So if one slipped while shaving there was a big mess.

There are so many aspects which have to be followed on the path to perfection, the path to Krishna, and to a large extent these teachings of Srila Prabhupada have been forgotten. Saddhana-bhakti means serving Krishna by following the rules and regulations. There are so many rules and regulations and to advance we have to follow these rules and regulations. As I said it is a scientific process, if we follow the rules we will see the results. And if we don’t follow we will also see a different sort of result. A transcendental activity will bring us closer to Krishna and make material sense gratification seem unimportant to us and a material activity will cover our original Krishna consciousness more and make us more attached to material activities. So we have to be careful to do everything for Krishna under the direction of the pure devotee of Krishna.

Krishna will always look after you. He is in your heart. He will help you remember Him if that is what you want, He will give you knowledge, and if you want He will help you forget also. Ultimatly it is up to our desire. Krishna has given us a little independence to desire. Do I want Krishna or do I want maya? So if we want Krishna, Krishna will provide us with what we need to make spiritual advancement, if we want maya, Krshna will provide us with what we need to “enjoy” in the material world. The choice is ours.

If you have more questions please ask.

Take shelter of Srila Prabhupada, read his books and chant Hare Krishna and be happy!

21 Responses to The “Living Guru” Concept