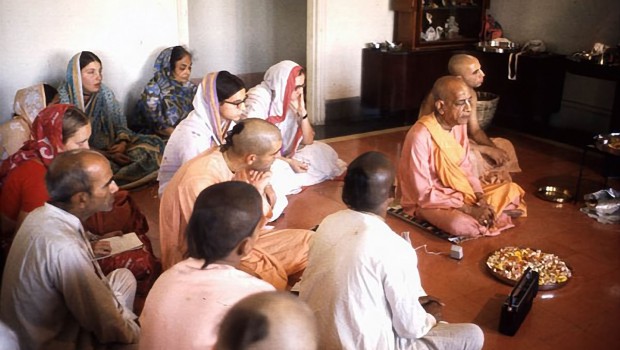 Vyasa-Puja Offering to Srila Prabhupada–Saved by His Sanjivani Glance

There is a nice similarity here, Srila Prabhupada, with your wonderful pastimes on earth. You also plunged into the poisonous waters of our American lifestyle, both figuratively and literally.

Please accept my obeisances at your lotus feet. All glories to your Divine Grace.

By your mercy, I’ve been blessed with a fascination for the pastime of Lord Krishna’s dancing on the hoods of the Kaliya Serpent. This pastime is a multi-faceted jewel of Sri Krishna’s divine eternal lila, and has many spiritual instructions in the narrative, which are explained to us by you, Srila Prabhupada, and the previous acaryas. It appears to us that there are many similarities in your earthy pastimes that we can compare to this Kaliya pastime. Let us all glorify our Divine Grace Srila Prabhupada with several comparisons to this pastime of Lord Krishna.

As the pastime goes, first the cowherd boys drank the waters of the Yamuna, which were poisonous due to Kaliya’s venom, and they fell down, apparently dead. Then Krishna, Who is the life of all that lives, cast His merciful glance upon them, and they stood up and looked at each other in astonishment. They knew that it was Krishna’s sanjivani-rasa glance, which had saved them.

Just as Lord Krishna revived the cowherd boys with His glance, so did you deliver your sanjivani-rasa glance to our western world, dear Srila Prabhupada, you also raised us from the dead with your merciful glance. We are like walking zombies, the living dead. We were corpses barely animated by the strings of maya, completely immersed in the network of decadent American culture. We were entrapped in tamasic obsessions of drugs and sex, and enchanted by a hypnotic music, which glorified such activities. Like the cowherd boys in Krishna’s pastime, we also rose up from our deathlike trance and looked at each other in astonishment, knowing that you had revived us from our comatose condition and had raised us up to your blissful transcendental devotional service to Lord Krishna.

After reviving the cowherd boys, Lord Sri Krishna climbed into a big kadamba tree, and tightened his belt, and then jumped into the water with great force. The acaryas compares this to a kingfisher who dives into a river to catch his prey. The force of His plunge was so deep and strong, that it appeared that He penetrated the Patala region of the universe. His forceful plunge pushed the waters of the Yamuna over her banks, creating high waves, which overflooded her banks for one hundred yards, as if something very large had fallen into her water.

There is a nice similarity here, Srila Prabhupada, with your wonderful pastimes on earth. You also plunged into the poisonous waters of our American lifestyle, both figuratively and literally. In a literal sense, you penetrated the vast waters of the Atlantic ocean, aboard the Jaladuta, and entered our Patala-like region of the universe. You then created huge waves of the transcendental sound of Krishna’s holy names, which roared like tidal waves across the planet, overflowing all shores with krsna-prema. You broadcasted the transcendental holy names of Lord Krishna, and caused the holy names to overflow our earthly embankments in the forms of your transcendental books and your nectarean bhajans and kirtans, and your recorded discourses on the science of Krishna consciousness.

By His powerful dive into the Yamuna’s waters, Lord Krishna created great waves, and the deadly poison rose up into a mass of foam, which rode the crests of these waves. Lord Krishna then sported in the lake like a lordly elephant, and simply by splashing His hands and arms, and swirling His mighty arms, He produced wonderful musical sounds within the water. Lord Krishna also swirled His mighty arms, causing the poisonous water to burst into flames. Similarly, you too, Srila Prabhupada, caused a great commotion in this kingdom of maya, conquering all the mundane philosophers and religionists, and at the same time you playfully created wonderful musical sounds with the expertise of your kartala, mrdanga and harmonium playing, and your blissful kirtans, which began in Tompkins Square park in New York city.

Lord Sri Krishna appeared very beautiful and delicate in the waters of the Yamuna. The Kaliya serpent beheld Krishna’s unparalleled beauty, yet he was so envious that he bit Sri Krishna on His chest and enveloped Krishna his mighty coils. Then the inhabitants of Vrndavana saw their Lord Krishna trapped in Kaliya’s coils, and they experienced great lamentation on the banks of the Yamuna. They fell to the ground just like trees that had been cut at the root. Lord Krishna could have escaped at any time, but He wanted to see the great love of His devotees for Himself.

Similarly, Srila Prabhupada, you also displayed your beautiful transcendental form of Lord Krishna’s pure devotee, your form shining with a golden lustrous complexion, which makes us think of the golden form of Lord Caitanya. There were many materialists who are greatly charmed by your transcendental form, and they received great benefit from your darsana. Others were attracted to your form, but they were so envious that they tried to hamper your movement.

You came as an elderly gentleman and had some great difficulties aboard the ship Jaladuta. And later in NY, you had a similar difficulty, and the doctors had said it was a mild heart attack. You said that your devotees had saved you by chanting the Nrsimadeva mantra. Then you had to go back to India, and Jayananda and all the devotees were in great anxiety. They were crying, thinking you might not return. This was ultimately a great impetuous for the devotees to increase their love for you. It seems that Lord Krishna is always putting devotees into anxiety for the safety of His pure devotee, or for the safety of Lord Caitanya’s sankirtan movement.

Dear Srila Prabhupada, when you had a heart attack on the Jaladhuta, we are sure that the demigods and previous acharyas were looking down upon this scene with great anxiety, greatly lamenting that you might be thwarted in your great mission. On the night of the second day, Lord Sri Krishna appeared to you in a dream, in His many forms, such as Lord Varaha and Lord Nrsimha, and Lord Krishna told you not to fear, and said, “Don’t worry, I’m rowing your boat.” Thus Lord Krishna showed you that He was always protecting His great devotee, because of your exclusive dependence upon His mercy.

Now, in our present situation, we also think of the pastime of Lord Krishna being enwrapped in Kaliya’s coils as being similar to your anxiety for your Krishna consciousness movement. Sometimes it seems that your movement is being trapped in the coils of so many tentacles of the material energy, and we are standing on the banks in great lamentation and in acute distress, because we are in fear for your movement. You expressed such concerns when you wrote the following in your Bhaktivedanta Purport for Srimad-Bhagavatam 10.3.23:

“Although Krsna cannot be killed, Vasudeva, as the father of Krsna, was trembling because in affection he thought that Kamsa would immediately come and kill his son. Similarly, although the Krsna consciousness movement and Krsna are not different and no asuras can check it, we are afraid that at any moment the asuras can stop this movement in any part of the world.”

So similarly, we are sometimes in fear of the many tentacles of material energy, which seem to envelope your glorious movement, and we fall on the banks of lamentation and anxiety for the safety of your movement. But, just as Lord Balarama knew that Krishna could not die, and so you, too, Srila Prabhupada, you knew that this movement cannot be checked from the outside, and yet you were fearful that the danger may come from within, by your disciples not working in cooperation. That is why you said- “How much you love me will be demonstrated by how you cooperate after I leave.”

Then Lord Sri Krishna saw that His devotees were too much in lamentation and so He decided to dance on the heads of the Kaliya serpent. It is seen that Kaliya was the personification of false ego, and Lord Krishna displayed His artistic expertise by dancing on the unsteady moving surfaces of Kaliya’s heads, and Krishna shows the world how He pushes down the false ego of all materialists. Ultimately all beings must all bow down their heads to Lord Krishna, especially in Krishna’s form of time, as the stubborn egotists must bow down their arrogant heads to the certainty of death. The difference with the devotees bowing down and the non-devotees bowing down is that devotees lovingly bow down to Lord Krishna in devotion and then go back to godhead.

Srila Prabhupada, you showed a similar pastime to the world, when you danced so artistically upon the arrogant heads of so many philosophers and religionists and decadent leaders of different countries. You smashed their egotistical pride, you annihilated their bogus philosophies, and yet you danced so nicely and attractively upon their heads, so that they did not feel devastation and pain. They saw how pathetic their plans were–next to the philosophy of Bhagavad-gita and Srimad Bhagavatam. They were charmed by your irresistible personality, and they came away from your chastisement with fond memories of your association.

We, the followers of your Divine Grace, will sometimes detect the rising of the ugly heads of false ego within your movement, and we too, sometimes try to tap dance on the heads of false ego of other prabhus, only to find that our own false ego is much larger. We pray to heed your instructions and try to cooperate to push on your movement, and not enlarge our own false ego Kaliya heads, and thus divide your movement. We pray that we dance on our own head with boots, so as to reduce our false ego into our real spiritual ego, service to you and Lord Sri Krishna. We pray to practice tolerance and give all respect to other devotees. Jai Srila Prabhupada, all glories to your Divine Grace!