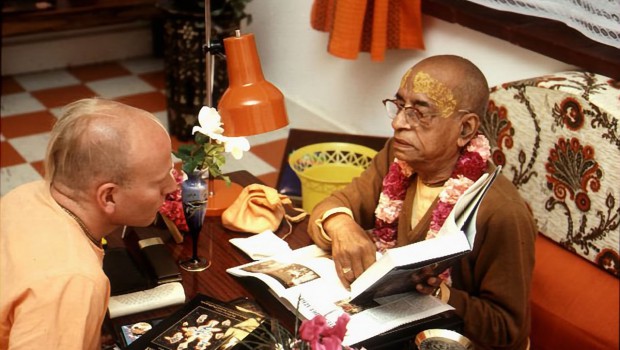 Those who have tried it know for themselves that Krsna awards an unusually sweet taste to anyone who makes even a small effort to distribute Srila Prabhupada’s books.

Indeed, Lord Chaitanya Mahaprabhu wrote in His siksastakam prayers: pratipadam purnamrtasvadanam – “At every step, this Sankirtana process will give you a full taste of the nectar for which you are always anxious.”

<p?But amidst the myriad of wonderful ways in which one can broadcast the glories of the Holy Names, there is something utterly unique and special about distributing Srila Prabhupada’s books.

Confirming this, Sankirtana leader, Jayanti Radhika dasi of ISKCON San Diego recently wrote to us about Mrs. Prakasha, a long time member of ISKCON who this year went on book distribution for the first time:

Jayanti Radhika wrote: “Mrs. Prakasha told me, ‘Doing this makes me feel like a real devotee; for the first time I feel truly connected to what Srila Prabhupada wants us to do.’

Jayanti continued: “Mrs. Prakasha had determined that she’d come out for two hours; but when her two hours were up, she didn’t want to leave.”

In a similar letter, senior devotee and veteran book distributor, Ragatmika dasi of Alachua, Florida expressed her realizations about getting back out on book distribution after a long hiatus. She wrote: “Well, needless to say, it all came back–the sweetest taste I had ever experienced in my life–from giving Srila Prabhupada’s books to a conditioned soul. By Prabhupada’s grace, I felt I never wanted to stop. You reminded me that Srila Prabhupada wanted us to take over the ‘Family Business’ — book distribution.”

Now everyone, everywhere can get a taste of this nectar. Coming up, is the annual event during which devotees all over the world drop what they are doing for one day (or at least for an hour or two) to go out to distribute some books. This day is called “World Enlightenment Day” and is an international grassroots project inaugurated on Srila Prabhupada’s centennial in 1996 to glorify him by perpetuating the legacy of his books and the art of book distribution.

So we are writing this notice to encourage everyone to organize now to be ready to go out for book distribution on Saturday December 13. Everyone is invited.

Some devotees are getting permission to set up book displays in front of shops. (Hint: Indian grocery store owners easily give permission.) Others are going to street fairs, concerts, or busy street corners to distribute their stash of books. Still others are organizing Hari Nama chanting parties and will bring along some books to distribute. And a number of devotees are even planning to go door-to-door. The fact is, at this holiday time of year, there are many places to go to meet people who are in a festive mood. Just make the endeavor – Lord Chaitanya will help you in many wonderful ways.

And if for some reason you cannot personally go out on this day, you can buy some books and give them to someone else who is. Everyone will benefit. And if you can’t afford to sponsor others, then offer some other kind of assistance by providing transportation, hot prasadam, or encouraging words to enliven the distributors who are going out.

In whatever way you choose to participate in this years’ World Enlightenment Day, you will be blessed and your taste for hearing about Krsna will increase.

In Srimad Bhagavatam Suta Goswami says: “O twice-born sages, by serving those devotees who are completely freed from all vice, great service is done. By such service, one gains affinity for hearing the messages of Vasudeva” (S.B. 1.2.16).

There can be no doubt that book distribution is pleasing to Srila Prabhupada and anyone who takes it up is doing, “Great service.” Consider how Srila Prabhupada dedicated his life to his translations and purports, rising each evening before midnight while everyone else was sleeping to speak his divine realizations into a Dictaphone. Then in hundreds of lectures and letters, Srila Prabhupada implored his followers to print and distribute his books profusely to the masses.

Here are a few excerpts from his letters in 1972:

“My ambition is to spread these books far and wide all over the world so that everyone shall read at least one of our books and that will change his life” (S.P. Letter to Karandhar 2/5/’72).

“I want to sell as many books as possible, that is the main thing. By selling books, that is the best preaching work” (Letter to Bhutatma and Kesava 2/11/72).

“Print books, distribute profusely, and that will be the best preaching work. What will your three minutes’ preaching do? But if they buy one book, it may turn their life. So make this your important task, to print our books in French language and other languages, and distribute widely, and that will please my Guru Maharaja. Never mind it takes a little time to make progress, our process is slow but sure, and we are confident that if we continue in this way we shall go one day back to home, back to Godhead” (Letter to Bhagavan 5/11/72).

So, please, don’t hesitate. Plan to join the thousands of other devotees around the globe on Saturday December 13, who will go out to enlighten the people of their cities towns and villages with transcendental knowledge. As Prabhupada used to say, “This is our movement. We want to see that everyone is happy. That is the Vedic vision. Sarve sukhino bhavantu. This is human life. Human life means paropakara [“Doing good for others”]. That is Caitanya Mahaprabhu’s mission, to do others something auspicious. That is human life” (Denver July 2, 1975 Lecture).

For more information about World Enlightenment Day or for encouragement, support or training, contact:

Please Report your World Enlightenment Day scores to: mayapur @ aol.com (No score is too small to report!)

World Enlightenment Day is an international grassroots project created to glorify His Divine Grace A. C. Bhaktivedanta Swami Prabhupada by perpetuating the legacy of his books and book distribution.