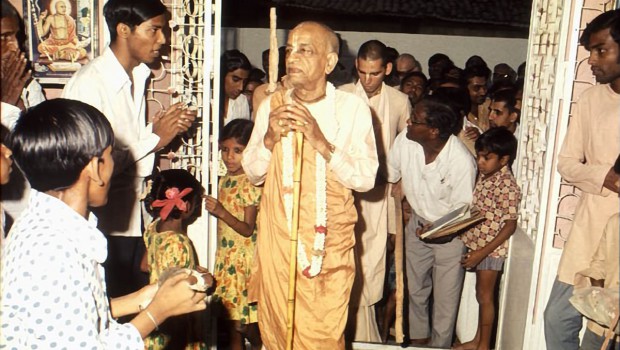 This extremely difficult back-drop was not helped by the fiasco that ensued after Srila Prabhupada’s departure. A huge mess developed due to all the different warring Guru factions that developed such as the Indian Maha-Visnu Swami’s group, Tamal Krishna Goswami’s group, Hamsaduta’s group, Lokanatha Swami’s group etc. The local Indians who are wealthy and pious, however got fed up with different groups all coming to collect. Thus to make progress has been very difficult. However in the last 3 years, an amazing turnaround started to happen. This began with the Singapore temple becoming the first temple to join the IRM way back in 1997, well before the more famous temples such as Bangalore or even Calcutta. The temple store even began selling copies of the Final Order. Under the leadership of Sundar Gopal prabhu, the yatra is now benefiting from the unity and spiritual mercy that flows from having re-instated Srila Prabhupada as the sole Diksa Guru. This has culminated in the devotees in Singapore being recently given the never-before obtained opportunity of presenting Lord Krishna to the public.

The Asian Civilisation Museum which is famous throughout South East Asia, and which presents periodic showcases portraying Asian culture, most recently embarked on a 4-month exhibition on Lord Krishna entitled “Krishna – The Blue God”. Organised by the museum and the National Heritage Board of Singapore, a subsidiary government body established to enhance cultural activities within the island, the exhibition has become a popular hit amongst cultural enthusiasts. Most notably, the devotees were invited to perform a 15-minute kirtan in front of an estimated audience of 200 people as part of the opening of the Krishna exhibition on 21 June 2000. It was the devotees’ ecstatic Harinama which officially opened the exhibition. The exhibition features the various pastimes of Lord Krishna. The local Hare Krishna Temple and Srila Prabhupada are prominently featured in the exhibition. The Deities of Sri Sri Radha Madana Mohan are also featured. And that’s not all! Devotees have been invited to present lectures on Lord Krishna to the Singaporean public over the 4-month period. Plays, story-telling for children, etc. are also to be conducted upon the invitation of the organisers. We have already been confirmed for presentations at the Museum on 13 and 17 August. This would expose children from over 200 schools, both primary and secondary, to the philosophy and pastimes of the Lord. No bigger opportunity has been presented for the preaching of Bhagavata Dharma in Singapore in the last 23 years.

More amazing surprises have followed. Just recently, the principal local Chinese Newspaper, the Lianhe Zhaobao which has a readership of over 1 million, featured a three quarter page article on the local Hare Krishna temple and mentioned the contribution of Srila Prabhupada to the flowering of Krishna Consciousness all over the world. This was the first time ever that a Chinese newspaper in Singapore has covered the activities of Krishna Consciousness in such a positive way. Very favourable publicity has therefore been gained on a scale never before envisaged in Singapore.

What is most amazing is that the greatest preaching opportunity has come about at exactly the same time as the society has suffered the worst publicity in its history, and Singapore was very badly hit, being one of the first countries in the world to carry news of the Turley child abuse law-suit. This is just another example of what we have been highlighting in our newsletters of how while many parts of ISKCON are now reeling, the IRM is actually flourishing under the most adverse of circumstances. All these events have come about purely due to Srila Prabhupada’s mercy, with success resulting due to a very basic and simple formula – strict obedience to Srila Prabhupada’s will and the placing of His Divine Grace at the centre of our devotional lives. Had this been strictly followed, ISKCON would have saved itself from the pandemonium of the last 23 years. The situation however can still be rectified. All success would follow as a result. Our improved position in Singapore is a classic case in point. For so many years, nothing substantial had been achieved in the public propagation of Krishna Consciousness within Singapore. Yet, out of nowhere, a potent opportunity has emerged. 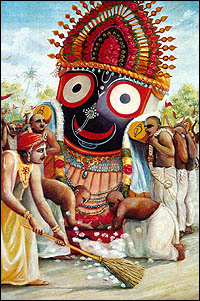 The celebrations also involved devotees gathering at a festival site to perform dramas depicting the pastimes of Lord Caitanya.

Just as we were about to send this newsletter out, the devotees in Singapore received a call from the Government’s National Heritage Board that the country’s biggest Television Station, TCS, Television Corporation of Singapore, would be coming to our temple this coming Saturday on 22/7/2000 to do a show on what a Krishna temple is like. This has been sparked by the exhibit at the Asian Civilisation Museum. The aim of the show is to expose the Chinese people to ‘Krsna – The Blue God’.

As well as being huge publicity for our Society, this is also another massive breakthrough, since never before in the history of Singapore have we received such television exposure.

The news about the burgeoning success of the Singapore yatra simply reiterates the fact that only by Srila Prabhupada’s mercy is anything and everything great possible within the Krishna Consciousness Movement. And this mercy will flow in abundance providing we faithfully execute Srila Prabhupada’s instructions and keep him in the centre as the Guru for the movement.

A hard copy of our main position paper ‘The Final Order’ is available on request. All other IRM papers can be accessed through the EDITORIAL SECTION of the IRM website at:

13 Responses to Big Breakthrough For Krishna In Singapore