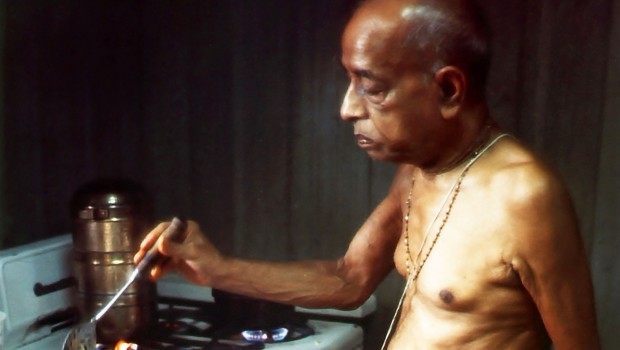 On your average day outside of India the process for preparing Srila Prabhupada’s lunch was as follows. About one half hour before massage I made a small chapati dough. Then, I chopped various types of vegetables and placed them in the middle tier of Srila Prabhupada’s famous three tiered cooker.

On the bottom tier I put some cauliflower and potato or some other vegetable combination with water to become a wet vegetable. In the top tier I placed a small two part tiffan. I put split dahl in the bottom with water and rice and water in the top. More vegetables were placed around the tiffan in the top tier of the cooker. Now, Srila Prabhupada’s famous three tiered cooker would be put on the stove with the heat set at a medium- low flame. Then I left the kitchen to give Srila Prabhupada his massage.

The massage could last from one to two hours. The trick in using the cooker during the massage was not to let the water dry out in the bottom. Srila Prabhupada showed me how to use the cooker with dahl on the bottom. A few times the dahl started to burn during the massage. That was a great source of anxiety to me. I never wanted to leave Srila Prabhupada in the middle of massage but sometimes you could smell the dahl burning. Srila Prabhupada would say, “What is that smell?” He knew it was his lunch. That is another story, for another day. Anyway, after about eight months and a few burnt lunches, I came up with the idea of cooking a wet subji on the bottom and steaming the dahl and rice in the top tier. That eliminated the anxiety of burning because the wet vegetable didn’t thicken like dahl.

After completing the massage Srila Prabhupada would pour a small amount of mustard oil into the palm of his hand and oil the gates of his body. Then he would walk to the bathroom to bathe. This gave me about 20 minutes to do the following. First, I would lay out his dhoti, kurta and copin (underwear) neatly on his bed. I would button the bottom two buttons of his kurta, so Srila Prabhupada would have only two more to close. Then, I raced to his sitting room and prepared his desk for putting on tilak. This meant opening his mirror. It was round like that of a powder compact, with a piece of carved ivory on the lid. Then, I made sure that his small silver lota (about the size of a golf ball) had water in it. There was a small silver spoon placed next to the lota. Finally, I placed the ball of tilak at the center of his desk.

After doing this I ran back to the servant quarters to finish preparing lunch. First, I took the cooker off the stove and put a small wok on the fire. In an emergency the lid of the cooker was used as the wok in it I made a large chaunce. Some was poured into the wet vegetable in the bottom tier. A little was put into the dahl, located at the top in one of the tiffan parts. Then, some assorted vegetables would be put into the remainder of the chaunce in the wok. If bitter melon was available, I would saute it in ghee and turmeric. Another chaunce was made to cook the remaining cut veggies. I would place all the preparations on Srila Prabhupada’s plates along with katori of plain yogurt and another with milk sweets. With Srila Prabhupada’s plate almost ready, it was now time to roll and cook a chapati.

Hopefully, all of this was done at about the same time His Divine Grace finished his Gayatri mantra. He didn’t mind waiting a few minutes but I would get scared if it took longer. I put the plates down on his choki, offered obeisances, and ran back to my room to cook another chapati. After he was finished taking chapatis with his lunch he would open the small tiffan that had the rice in it. Srila Prabhupada would usually take 3 to 6 chapatis with his meal. More often than not he took 3-4 chapatis. He enjoyed the remainder of his meal with steaming hot rice.

Please forgive me for this post. I started to write a different story but got caught up in preparing Srila Prabhupada’s lunch. It was so wonderful to be busily engaged in cooking for you Srila Prabhupada. I pray to become an expert cook, like my godsister Yamuna devi, so that I can prepare you sumptuous foodstuff life after life.

7 Responses to Cooking For Prabhupada