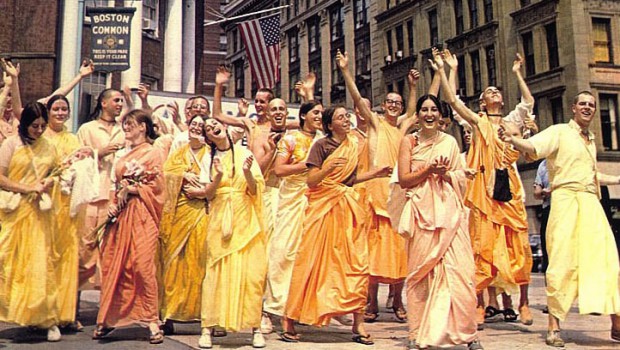 Deconstructing the Barriers Between ISKCON’s Members

It’s becoming increasing clear to me that the main issue we have here, is not the particular brand of logic we embrace, or is it the particular camp we align with, but the important issue facing us in Iskcon today, is how to deconstruct the barriers we’ve built between all the various members of different camps in Iskcon.

These barriers are manifest in the form of Vaisnava aparadha in various levels. The real problem is not our inability in VC [and Iskcon] to come to a unified agreement on guru tattva points, but our main task is to restore Vaisnava respect and love and acceptance for all members of Srila Prabhupada’s family, because we ALL love and worship Srila Prabhupada!

For example, we have a certain number of Vaisnavas living in the same area of the world, like in LA for example. Yet, when certain Vaisnavas happen to meet on the street, it is often that such Vaisnavas will feel some level of contempt for the other Vaisnava, even though they may appear cordial on the outside. This is perpetual Vaisnava aparadha on some kind of level. I don’t think I can live with this kind of reality.

When a new man or woman comes to our society, they are eventually confronted with this guru-tattva issue, and they invariably are forced to commit offenses to other Vaisnavas, who are worshipping Lord Krishna and Srila Prabhupada. This is sucking the very life out of all of us. Everyone loses, especially the Vaisnava who feels contempt for another Vaisnava, which is Vaisnava aparadha, and is drying up his/her spiritual life. So, the basic problem we have is not how we agree on logic on all these points, but how we can bring about peace in our society and stop offenses to devotees.

So, addressing your point here. You have the logic that Srila Prabhupada is ‘only’ saying that only HE can order such gurus [and not to jump to guru]. We can see it that way. But others in Iskcon are going to see it in another way, which can be valid. This being that Srila Prabhupada is making ASSERTIVE statements, when he says, ‘granddisciple’, and ‘he becomes disciple of my disciple’ and ‘you become guru’ and so forth. They see these as assertive statements. In a way, they are being straightforward about it.

And then we may tell them, “Well prabhu, you have to start with logical premise #1, and then you progress to logical point #2, and that connects to point #3, and that means point #4, and therefore, you cannot understand #4, our conclusion, without this line of logic from #1 to #4.” Thus, we are asking them to jump through all these logic hoops and then accept our siddhanta. But all these people are set in their ways, and they aren’t going to jump through our logical hoops in order to defeat something they think is dear to them.

I have considered this problem, and came up with the main reason we are forced to offend each other. I call this false premise #1.

When you think about it, each side of the wall is thinking in this way. Especially the Iskcon rank, they are thinking that the ritviks are deviant heretics. This is what they’ve been taught. The ritvik position has been described as a ‘very dangerous philosophy.’ And likewise, the ritvik camp thinks the devotees in Iskcon are deviant also. Somehow, we have to deconstruct this false premise. Why is the #1 premise false? Because, either side can find Srila Prabhupada’s words to support either side, and it seems that both sides are looking at those words in a straightforward manner. In other words, either side has “reasonable cause” to think and believe the way they do.

So what is the way out of this predicament? It’s simple psychology. We need to examine how people think and why they think the way they do. Like I said above, the Iskcon rank are thinking these statements by Srila Prabhupada are assertive statements, which are saying that Srila Prabhupada is ‘going’ to order ‘regular gurus.’ And they think this is what he has done. They have become very attached to this position. All our arguments are not going to budge them from their position. The only thing we can do at this point is to see the other point of view and ask them to do the same.

If we can establish that both sides have “reasonable cause” for their position, or the simple fact that they, Iskcon ranks, accept these statements as assertive statements, then we can somewhat accept the their position, in that their view is logically acceptable to them, and to sane and rational persons, and then start the deconstruction of the barriers. Likewise, when they use the same psychology, then they will see that the so-called ritviks ALSO have “reasonable cause” to see the 7/9 and 5/28 points in a straightforward manner, which is logically acceptable to any sane and rational person. When both sides can come to the understanding that the other side is seeing Srila Prabhupada’s words in an honest straightforward way, then the healing can begin.

Then we can perhaps come to the point of acceptance of both positions and both live in harmony, in Srila Prabhupada’s house he made for everyone. Devotees can go to the temple without feeling contempt for other devotees.

Also, we may do well to read and discuss Dhira Govinda’s booklet, “Srila Prabhupada: The Prominent Link.” He explains in this book how Srila Prabhupada will be the ‘current link’ to the parampara for the existence of his movement, even though some will accept initiation from ‘regular gurus.’ I find it to be very logical and useful for the deconstruction of the above false premise and resultant offenses.