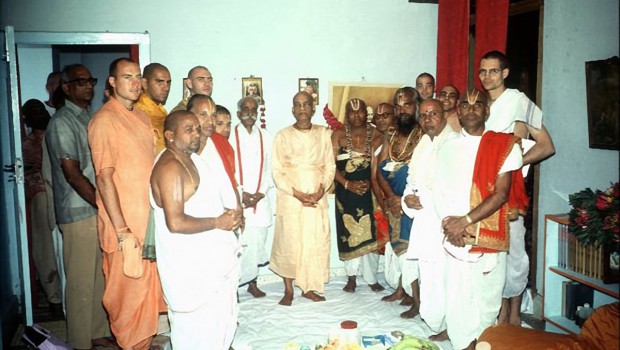 As even the GBC has acknowledged, ISKCON is facing many problems, is deeply divided and is disintegrating. Legal challenges to bankrupt ISKCON abound, Narayana Maharaja is rapidly taking over ISKCON congregations, and faith in the GBC has hit rock bottom. Even very senior members have called for mass resignations.

All sections of the Society have agreed that ISKCON faces many deep-rooted and fundamental problems which need to be tackled. In short, there needs to be change. Though opinions are divided on exactly what needs to be done, it is agreed by all that SOMETHING definitely needs to be done, and that there has to be some change. In response to this international clamour for change from the devotees, the GBC had trumpeted this year’s GBC meetings as the time when finally these radical changes would take place in our Society. Our GBC Chairman, Ravindra Svarupa Das, who was instrumental in dismantling the zonal acharya system, would once gain apply his ‘reforming’ magic, and herald the radical changes required. Of course, to ensure that no REAL change occurred – i.e. the removal of the impostor Gurus which is the root cause of the Society’s ills – these changes would only be concerned with the ‘GBC structure’. Thus, as we have been reporting through our newsletter, grand new schemes were dreamt up, such as the proposals to have a new 3-tier management system. On the ISKCON COM conferencing system, many mainstream devotees were formulating their proposals for the changes required. Even those who had some sympathy for the IRM had instead put their faith in these radical changes that were to be upon us, insisting that change must be done via the GBC in a systematic, and not revolutionary manner. The desire for change was gaining momentum and gathering a head of steam as this year’s GBC meetings were upon us again. Surely the time had finally come for something to happen? It was inconceivable that even the GBC could continue fiddling while ISKCON burned.

We have often remarked on the GBC’s ability to amaze, displaying incompetence and bad judgement on a scale that even the IRM could not have predicted. However, they have surpassed themselves yet again. For after many days of heated debates, discussions, straw votes, sub-committee meetings, plenary sessions, more plenary sessions, manager’s meetings, deputies meetings etc., the net result has been that the GBC have decided to do *NOTHING*. That is, they have agreed that things should remain exactly as they are; in other words, there should be NO CHANGE. In case you are doing a double-take, I will repeat that: The GBC has decided to change absolutely *nothing*. It has concluded that things are fine just as they are. Even the report on the GBC meetings published on the CHAKRA website states:

“This year one of the major topics involved restructuring the GBC. A sub-committee of twelve senior devotees representing different regions, ashrams and viewpoints considered several related proposals. Among their conclusions that were accepted by the GBC body:

“1. Membership on the GBC body should not be limited by ashram or external consideration but should be open to any qualified devotee.”

i.e. Keep things exactly as they are now, with absolutely NO restructuring of the GBC!

To give you an indication of what a fiasco these meetings were, even some of the disappointed GBC members remarked that the GBC had finally adopted the IRM’s ‘No Change In ISKCON Paradigm’! Only, they decided to begin from NOW – rather than 1977! This is not a joke. This is exactly what happened and what was said. We know all this because some GBC members and deputies were so upset that they called us and told us. It seems that Jayapataka Swami’s (JPS) late entry on the scene, combined with his hundreds of disciples voting on the internet for his proposal, which would leave things basically as they are, won the day. It appears that after the humiliation that Ravindra inflicted on JPS in the 1986 ‘zonal acharya’ debacle, JPS has finally taken his revenge. Such is the weakness of our Society that one man has been able to swan in and thwart the supposedly international grass roots call for change. It would seem that JPS, with his thousands of disciples, is the only power base left in ISKCON.

The one thing the GBC DID decide was that ISKCON’s resources should be marshalled against an all-out war against the IRM – now there’s a surprise! Their strategy is to attack myself with all the ferocity they can muster whilst simultaneously doing everything possible to appease the IRM secretary and ‘grand-disciple’ Madhu Pandit Das (Temple President of ISKCON Bangalore). In this way they think they can break the IRM. It seems, however, that they are doing a pretty good job of breaking *themselves* up without any help from the IRM. They have decided to put all their efforts into salvaging what is left of India, by trying to destroy the IRM, which has had great success in India. This is because they are already resigning themselves to the fact that outside of India, what little is left of the Society will be bankrupted by the Turley child abuse lawsuit. For Turley has re-filed his original suit, taking out many of the obvious errors which had previously been highlighted, resulting in a new motion which the GBC now agree is ‘strong’ legally. They have calculated that just the pre-trial hearings alone will cost them around 50 thousand dollars a month. They have realised that the case is not going to go away any time soon, and at the very least the negative publicity will severely harm their ability to collect funds to keep the ship afloat.

Another change that was made was that the GBC Chairman Ravindra Svarupa was voted off due to his incompetence. Devotees levelled many different charges against him, with the main one being that he was running the GBC like a dictatorship and was a hopeless manager. Some examples of this incompetence which were raised at the meetings included:

3) His secret re-organisation meeting in Detroit, where only his hand-picked pals were invited to assist in his plan for the radical carve-up of ISKCON. Many senior members of ISKCON were not even aware that such a meeting was taking place.

4) That though he was the GBC for various countries in Europe, throughout his whole term he had not even visited these countries *once*; that even the Temples under his care in the USA are crumbling.

5) Concern was also raised about a $50,000 donation he had personally been given for the ‘GBC Restructuring Project’ (which never was!), by Srinathji Das (Dr. N.D. Desai), a wealthy industrialist disciple of Radhanatha Swami.

He has now been demoted to being a Vice-Chairman limited strictly to only ONE portfolio – to fight the IRM. In this he will be forming an unholy alliance with Gopal Krishna Maharaja and his nemesis, JPS, who between them will be heading up the anti-IRM drive. The new GBC Chairman is to be Ramai Swami, who is currently a GBC in Australia.