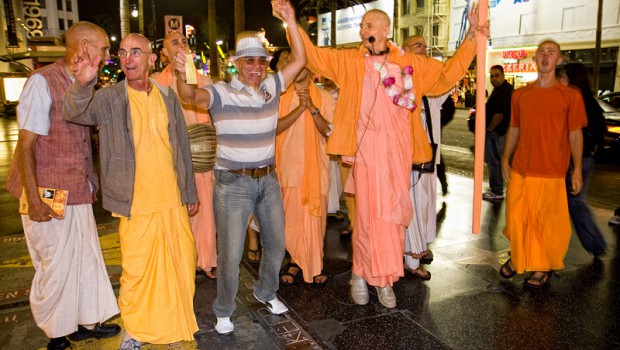 The chanting went on from 7pm to 11 pm. When we left many devotees commented that they wanted to keep chanting all night long. As we were heading for our vehicles and officer called us Hari Hari Hari!

The most ecstatic Harinama in a long time was performed by the devotees from the Los Angeles Temple at the annual West Hollywood street festival. The streets were blocked off and over 100,000 people attended. As the Harinama party, (and I do mean party), performed ecstatic Kirtan, the people joined in and chanted and danced with free spirits. Most of the people were wearing elaborate and bizzare costumes. The devotees passed out mantra cards and invitations to the temple to the enthusiastic crowd.

I saw many people reading the cards so they could chant the Mahamantra with us. Smiles were everywhere and the dancing was out of this world! People that never chanted and danced with us before joined in and we went in a big circle and counter-circles and more and more people joined in. Although there was other entertainment around I heard many people say that they liked the chanting party the best. Some people stayed with the party the whole time. The chanting went on from 7pm to 11 pm. When we left many devotees commented that they wanted to keep chanting all night long. As we were heading for our vehicles and officer called us Hari Hari Hari!

Most of the people at this event and are into material sense gratification and sinful activities and could be in the most fallen category. Therefore they needed the mercy of the Harinama Party more than ever. The mercy of Lord Chaitanya and Lord Nityananda and Srila Prabhupada was manifest through all of the devotees who participated in the Yuga dharma. The effects of Kali were reversed and the scene turned into Vaikuntha by the power of the Holy Names.

One devotee was dressed up nicely as Lord Nasringadeva, another devotee dressed up as Hanuman and I dressed up like Krsna. So we fit in well with the scene in West Hollywood. Thousands of people were benedicted with the Harinama party and I’m already looking forward to next years party. Although there were some crazy outfits and people around I think all of the devotees who were there were happy that they were. They will talk about and remember that Harinama for a long time!