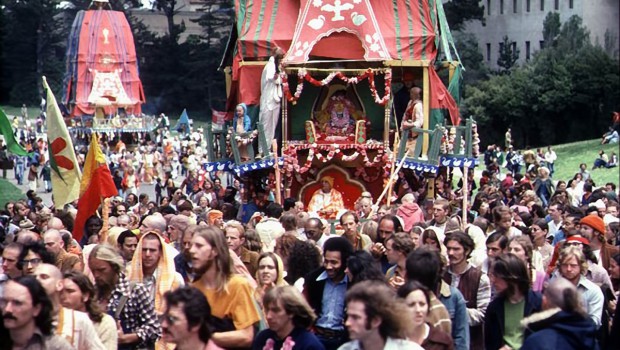 After the internal disagreement & charges and counter charges ISKCON’s Rathayatra parade today was lifeless and devoid of fervour. The Calcutta High Court gave the right for this years Rathayatra parade to the Mayapur based ISKCON Bureau. In the over 20 year history of the parade, it was for the first time that this religious parade was piloted by Dayaram Das. In this the third largest Rathyatra of the world, there

Having failed in 4 different attempts to remove me as Temple President of ISKCON Calcutta, the GBC Gurus have now sunk to a new low.
The Calcutta Ratha Yatra and has grown under the aegis of the Calcutta temple to being the largest in the world with over 1.5 million participants, massive prasadam distribution, VIP guests of honour, and a spectacular festival program, which last year involved crowds forming a *** 1 KM *** queue to see our exhibits. We have been able to put on such a show due to intense preparations and much planning and organisation. All for the glory of Lord Jagannatha. Not only that, but it is also a huge media event, and a great opportunity to get maximum publicity and favourable coverage for ISKCON, which we have achieved year after year.

However out of sheer spite, this year Bhakti Caru Swami and Jayapataka Swami set out to sabotage this glorification of Lord Jagannatha. Unknown to us, their disciples had submitted a fraudulent application for permission to conduct the Calcutta Ratha Yatra on behalf of ISKCON Calcutta on ISKCON Calcutta letter-head. The Police simply thinking it was the same permit they give to ISKCON every year simply granted it. By the time everyone found out what had happened it was too late to do anything, as the festival was only days away, and the courts were not prepared to take action so late in the day. The GBC Gurus had taken away our right to perform Lord Jagannatha’s Ratha Yatra, simply out of enviousness that it is the IRM which puts on the largest festival in ISKCON. Mayapur which eventually attempted to put on the Ratha Yatra knew at the outset that whatever they would stage would be a flop, since they had made no organisation, nor did they have any resources or experience. They knew that the outcome of their action would simply be to ensure that Lord Jagannatha would not be feted with the usual pomp and splendour, but rather would have to put up with a 4th class Ratha Yatra. And the festival was a huge flop and embarrassment as reported by a number of different impartial newspapers:
——————————————————————————————————————————————–
“ISKCON’s Rathayatra celebration in Metro city of Calcutta became a dull & dry show because of infighting between Dharma gurus. Since the last 20 years the Rath Festival in this metro was known as the third biggest Rath Yatra festival in the world, but because of the infighting very few people attended the Rath Yatra celebrations as compared to last year and the size of Lord Jagannaths chariot was also much smaller in comparison to last year.”
(SANMARG, June 24th, 2001)
“Kolkata, the annual car festival today turned out be a poor show.”
(Hindustan Times, June 24, 2001)
“After the internal disagreement & charges and counter charges ISKCON’s Rathayatra parade today was lifeless and devoid of fervour. The Calcutta High Court gave the right for this years Rathayatra parade to the Mayapur based ISKCON Bureau. In the over 20 year history of the parade, it was for the first time that this religious parade was piloted by Dayaram Das. In this the third largest Rathyatra of the world, there was a lack of feeling and togetherness, which has always been very tangible in the previous years.”
(Vishvamitra, 24, June 2001)
“But visitors have found this fare lifeless. “Despite all the arrangement, it is a dull and dry fare”, say Rituparna Sen and Atul Bhattacharya of South Calcutta.”
(Hindustan Times, June 30th, 2001)
“ISKCON feud over dismal fest. After a lacklustre Rathayatra, the Ultaratha, too, was devoid of the usual
glamour and religious fervour associated with the celebration of this Vaisnav festival in the city. […] Each has blamed the other for the colourless rathayatra this year.”
(The Asian Age 2 July 2000)
“An attraction of the ISKCON Rathyatra was special because of the presence of a “special guest”, but due to the internal infighting there was no special guest. “
(Pratidin, June 24, 2001)
———————————————————————————————————————————————-

The reports say it all. And please note how they also make unfavourable comparisons in respect of the previous year, when the festival was very succesfully organised by ISKCON Calcutta. Please compare these newspaper reports from many different sources with the lies that Bhakti Caru Swami has propagated, where he has stated that:
“Hundreds of thousands of visitors lined the streets through the entire route.”
(Bhakti Caru Swami, Calcutta Ratha Yatra Report, 1/7/01)
We can only assume that all the many different newspaper men must have somehow failed to notice these many ‘hundreds of thousands’ of visitors, which only Bhakti Caru Swami, being a self-realised soul, was able to see with his special mystic vision! So regardless of what lies may have been spread by Bhakti Caru Swami about the ‘success’ of the festival, the impartial media clippings from a whole variety of newspapers tell the REAL story – that out of sheer envy and spite, the GBC Gurus were happy to sacrifice Lord Jagannatha’s festival.

However Bhakti Caru Swami’s lying does not stop there. He also claims that I:
“broke the chariots and damaged the dioramas on the floats the night before the Ratha Yatra.”
(Bhakti Caru Swami, Calcutta Ratha Yatra Report, 1/7/01)
The truth was that having had our permission to hold the festival sabotaged by Bhakti Caru Swami and his followers, naturally our preparations for the festival ground to a halt, some 2 weeks before the festival was about to commence. Our 3 huge carts, along with everything else which still had to be completed, remained unfinished.
*** We have a picture taken by the newspapers 2 weeks before the festival which proves that the construction on the carts was halted, and that their condition remained the same right up to the time of the Ratha Yatra. ***
So they did not suddenly become inoperable the night before the festival. They had been unfinished for some time thanks to the GBC’s actions, and thus they could not use them due to their own folly! And we could not fix them since they had asked the court to order that we could not ‘interfere’ with their arrangements for the festival! Indeed knowing this would be the case, a few days before we stopped construction on the carts, Mayapur had arranged to bring their own carts which were less than half the size of the usual carts.
*** So just as we exposed in our last newsletter regarding their shameful behaviour of trying to storm the Calcutta temple through violence – not only do the GBC Gurus and their followers engage in these despicable tactics to try and destroy the preaching, but they also have the audacity to try and cover up their shameful behaviour through lying! ***
So the net result was that what would have been an annual opportunity to glorify Lord Jagannatha to millions of people in a huge way, was instead sabotaged into being nothing but an embarrassment, and an opportunity for the media to comment on the ‘in-fighting’ which led the festival being destroyed. The GBC Gurus had a clear choice before making their fraudulent application: submit it and it would be guaranteed that the festival would be sabotaged, or do nothing and the festival would have been a huge success with millions turning out as in previous years. Their actions demonstrate that they have no concern for Lord Jagannatha, but only for thinking of yet another way to try and remove me from the temple. The following leaked memo from the GBC conference reveals that the real purpose behind their actions was to simply to make their position stronger legally in respect of trying to remove me as the Calcutta Temple President:

“By getting this permission and holding this Ry festival it has made us legally more strong.”
(Bhakti Purosottama Swami, Calcutta Ratha Yatra Report to GBC)

Even the Police were aware that the real agenda behind Mayapur’s attempt to stage the Ratha Yatra was to try and somehow take-over the Calcutta Temple:

“Because of the fear of attack, armed police kept vigil at the Albert Road ISKCON temple. The vigilance team has been deployed since Friday morning.”
(Ananda Bazaar Patrika, June 23rd, 2001)

Bhakti Purusottama Swami also admits that they knew that their actions would guarantee that the festival was effectively sabotaged:

“Now this committee is trying to hold the ratha yatra depending upon the mercy of Lord Jagannath. There were only 9 days left for RY to prepare. This program takes two to three months preparation.”
(Bhakti Purosottama Swami, Calcutta Ratha Yatra Report to GBC)

So they admit that they preferred that the ‘three months’ preparation we had done was discarded, and instead Lord Jagannatha be subjected to their 9 days of virtually no preparation.
As usual all their actions back-fire. After having spent all this time, effort and money, they achieved nothing except destroy the festival. The public were so upset with them, that no one would give them any donations for the festival as they themselves admit:
“Very few hardly some one giving us donation.”
(Bhakti Purosottama Swami, Calcutta Ratha Yatra Report to GBC)
And even the organiser of the Ratha Yatra from Mayapur had to admit to the press that ultimately their actions were a mistake:
“The Rathayatra parade by the Mayapur Bureau was unfortunate said Jagadhatriya Das of ISKCON Mayapur. The Guru’s Of ISKCON were seen, wandering around in their convoy of air-conditioned cars during the parade of their Lordship Jagannath, Baldev & Subhadra.”
(Vishvamitra, 24 June, 2001)

We never in our wildest fantasies had imagined that the GBC Gurus would stoop so low as to submit a fraudulent application that would destroy the Ratha Yatra. Consequently we did not pay much attention to what was simply a routine application for festival permit. We knew that they would do anything to destroy us, but we did not know that they had such disdain for Lord Jagannatha, that they would also be happy to sacrifice his festival just to satisfy their egos.

But you learn something new everyday! And thus from now on we will make sure that this will be the last time that they get an opportunity to sabotage Lord Jagannatha’s festival.