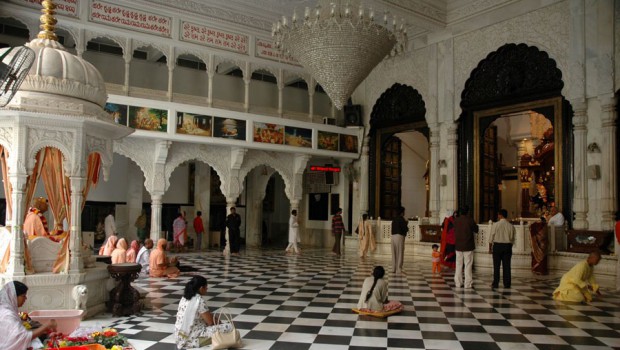 I want to know that whether it is compulsory for a person, who is serious in Krishna Consciousness, to become a full time devotee or he can perform his duties being a congregational devotee?
Hari Bol — Srijana

I have been requested by Shreeman Madhuvisha Dasa to respond to your inquiry.

Srila Prabhupada himself said that he did not live in a Temple. When asked about devotees not living in the Temple he responded by saying that it doesn’t matter whether one lives in a temple or outside… both must follow all the rules and regulations. According to my understanding of Krishna consciousness, it is a gradual process… It is as gradual as we want to make it.

Srila Prabhupada compared living in a temple to a businessman who does much more business at the New York Stock Exchange, rather than hundreds of miles away. He compared ISKCON temples to “the stock of exchange of devotional service.” Lord Chaitanya stressed that association of devotees is paramount in regards to making advancement in Krishna consciousness. Indeed, Srila Prabhupada created ISKCON temples just for that purpose, so that devotees would benefit from each other’s association. One may live outside of the Temple, but one must not live apart from the association of devotees. Srila Prabhupada created the ISKCON Life Membership program and Sunday Feast program especially for those potential devotees, who, due to circumstances, could not live in a Temple. Srila Prabhupada also recognized that in the future, most people would not live in a Temple. Srila Prabhupada envisioned a world in Krishna consciousness. Obviously, the entire world can not live in even all of the ISKCON Temples we already have (almost 400 world-wide). Therefore, Srila Prabhupada said that only 50% of his mission was complete. The other 50% is what he described as “varnashrama” where people, not living in an ISKCON Temple, maintain Krishna consciousness while executing their material duties.

Herein lies the essential answer to your question. Although you may not wish to live in an ISKCON Temple, you have to make your own home a Temple by following all the rules and regulations, as if you were living in a Temple. As I said at the outset, Krishna consciousness is a gradual process. That gradual process is known as yukta-vairagya and also vairagya-vidya.

First we must understand what is the ultimate goal of Krishna consciousness. Once the ultimate goal is understood, everything else falls into place naturally and automatically. The ultimate goal is to feel love of Godhead in every sphere of one’s existential living condition. Love of Godhead is achieved by hearing and chanting without offense. In order to hear and chant offenselessly, one must become detached from material sense gratification. At first one vows to strictly follow the four prohibitions, namely, no eating of meat, fish and eggs, no sex outside of marriage for procreation, no intoxication, including even coffee, tea and cigarettes, what to speak of alcohol and other intoxicants or controlled substances, and no gambling. But this is just the beginning of what is called vairagya or detachment. As one naturally progresses day by day, year by year, one learns to become disinterested in the entire materialistic way of life centered around identification with the body.

There are so many unwanted things we become entangled in simply because of identification with the body. These unwanted things are known as “anarthas”. As one progresses in Krishna consciousness one become more and more keen to root out all unnecessary engagements, attachments, and entanglements which the devotee understands by hearing and chanting are impeding his/her ultimate success in achieving love of God. Finally, one completely surrenders without reservation to Krishna and is then able to taste love of God, the highest possible state of consciousness for the living being.

But one must do all of this in the association of other devotees. So if one does not live in a temple, one must find time to associate with devotees either by visiting the Temple, or attending functions in other’s homes where devotees congregate. Here in Southern California I conduct weekend seminars at different peoples’ homes where this hearing and chanting is done from 2-4 hours. I also do not live in a Temple, but following Srila Prabhupada’s instructions, I make sure that every weekend, I am in the association of devotees.

I hope this answers your inquiry. If you have any further questions, please email me directly.

12 Responses to Is It Compulsory for a Serious Devotee to Live in a Temple?