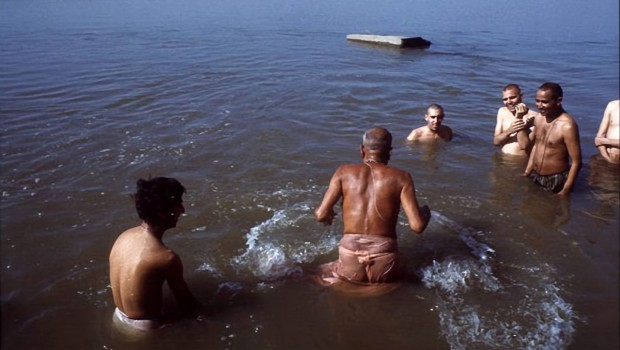 ISKCON has in many ways become a burden to the preaching of Krishna consciousness. It was a sharp sword in the hands of Srila Prabhupada, but has become a dull blunt instrument in the hands of very incompetent and sometimes foolish hands. Nowadays, the actions of some people are gradually separating the mission of Srila Prabhupada from the mission of ISKCON.

We have already reported on how even the GBC chairman has stated that the ISKCON society is ‘disintegrating’ (please see issue No. 21 – “GBC Special Issue – GBC Chairman Admits ISKCON ‘Disintegrating’ “). Now we have the following shocking statement from Abhirama Dasa. Abhirama Dasa is acting as the Managing Director of the S.M.D.P. (Sri Mayapur Development Project) which is the single most important and expensive project in the history of ISKCON. He is also a Regional Secretary for ISKCON South India, the Chairman of the M.V.T. (Mayapur Vrindavana Trust), and was/is on the board of the ISKCON Foundation. However this is what he said recently in a confidential e-mail sent to a co-Temple President of an ISKCON Temple in South India under his charge:

“I am not a fanatical ISKCON man. Actually, I am no longer sure that the institution is a useful preaching tool. In many ways it has become a burden to the preaching of Gauranga’s message. It was a sharp sword in the hands of Srila Prabhupada, but has become a dull blunt instrument in the hands of very incompetent and sometimes foolish hands. It is also a focus of envy for many people who are themselves failures and insincere. My interest is not to protect ISKCON at any cost, but to see how to increase people’s love for Hari kirtan, and to have faith in Srila Prabhupada. This has meant promoting ISKCON, in the past, because it represented these goals. Nowadays, the actions of some people are gradually separating the mission of Srila Prabhupada from the mission of ISKCON. I am shocked that I should say this, because I never thought it would come to this, but I must now say it.”
(Abhirama Das, 15/10/00)

Yet this is the person who has been entrusted with the biggest project in ISKCON’s history, and has also been given a whole chunk of India and a lot more besides to look after. Clearly he is just following in his Chairman’s footsteps. The malaise therefore obviously runs deep, beginning right at the top and running through all the sections of ISKCON’s leadership. Recently His Holiness Bhakti Caru Swami (BCS) also stated the following:

“I don’t hesitate to say that things are a mess in our society.”
(Bhakti Caru Swami giving Srimad Bhagavatam Class on October 5th in Vrindavana)

So we have a disintegrating society in a mess, which is nothing but a dull and blunt instrument in the hands of very incompetent and sometimes foolish hands, and which is nothing but a burden on the preaching. And this is what ISKCONs’ OWN leaders are saying–not us! You would think that with this state of affairs there would be some humility in their attitude towards others. Unfortunately not! Whilst freely admitting that their leadership has brought ISKCON to the brink of collapse, they still tried to expel the IRM –TWICE– just because we did not wish to surrender to this morally and spiritually bankrupt leadership!

Another example of this double standard can be seen in the same Bhagavatam lecture of BCS quoted above. In this he also says:

“When Srila Prabhupada was here, the spirit was so high; the preaching was going on so strongly. All the temples were full of devotees and so many individuals were just rushing to join this movement. And that is the Sankirtana spirit. We should revive that spirit. When Srila Prabhupada was here, individuals took so much risk; they risked their lives to go to different corners of the world and spread this movement. But unfortunately, we are missing that spirit today. Young devotees, 2 or 3 months in the movement, went out to spread and establish this movement all over the world. Now when we look back and think, we can say, “what are we doing? Where is that spirit?” what to speak of going out and opening new temples, many of the temples that Srila Prabhupada gave us are empty today. Why? We have to consider this. […] So let us try to revive that spirit of Srila Prabhupada’s Sankirtana movement. Let us revive the spirit of ISKCON once again. […]