Living With the Devotees (Compilation of Prabhupada Quotes)

One cannot live outside the society of devotees; one must live in the association of devotees where there is constant chanting of the glories of the Lord.

An astrologer calculated the birth-chart and predicted when Prabhupada was seventy he would cross the ocean, become a great preacher and open 108 temples 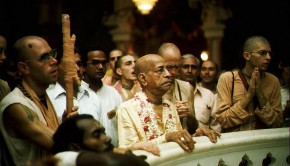