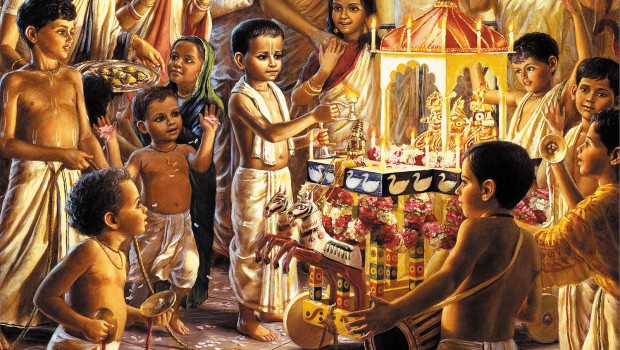 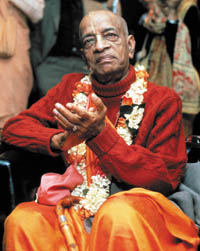 On the occasion of his birth, an astrologer was called. He calculated the birth-chart and predicted to the joy of all present that when Srila Prabhupada would reach the age of seventy he would cross the ocean, become a great exponent of religion and open 108 temples…

Born by the banks of the sacred Ganges river in 1896, Srila Prabhupada was destined to become the greatest ever ambassador of lndia’s spiritual knowledge to the world. Completely rejecting that Vedic knowledge was only for those born in a certain caste or for a certain race, he carried the spiritual message of Godhead to all peoples of the world in a dynamic movement which he began at the age of seventy. 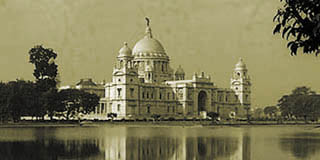 His writings were so prolific, his achievements so unprecedented that his contributions to world religious knowledge is munificent beyond compare. Whereas people everywhere are now familiar with “Hare Krishna” due to his efforts, he never strived to make himself known. Who was this unique personality who so selflessly did so much on behalf of God?

A Son is Born in a Spiritual
Family

Srila Prabhupada was born by the banks of the Ganges river in Calcutta on September 1st, 1896, the day after Sri Krishna Janmastami. It was the time of British Raj in India. 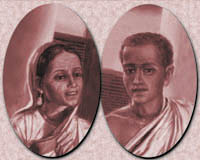 His mother and father were both devoted to Lord Krishna, especially in His form as Lord Chaitanya. In Bhagavad‑gita, Lord Krishna states:

“Or he takes birth in a family of transcendentalists who are surely great in wisdom. Certainly such a birth is rare in this world.”‑ Bhagavad‑gita (6.42)

“Actually his real business was worshipping Krishna, but for livelihood he did some business. We would be sleeping and father would be worshipping the Lord. Ding, ding, ding ‑ we would hear the bell and wake up to see him bowing down before Krishna.” ‑ Srila Prabhupada.

The Stars Foretell His Great Destiny

According to the custom, on the occasion of his birth, an astrologer was called. He calculated the birth-chart and predicted to the joy of all present that when Srila Prabhupada would reach the age of seventy he would cross the ocean, become a great exponent of religion and open 108 temples. 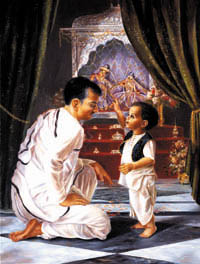 Srila Prabhupada’s father always treated him with great affection as a most special child and saw to it that his son learned the practice of Krishna consciousness from his very birth. He gave his son, Sri Radha-Krishna Deities for his childhood play. He arranged mridanga and harmonium music lessons and Srila Prabhupada became accomplished in devotional music. He also made sure his son learned Sanskrit, the language of the Vedic scriptures he would later translate for all the world to understand. Later, when there was talk of Srila Prabhupada studying law in England, his father objected: “He will learn drinking and woman-hunting‑I do not want his money!” In these ways, Srila Prabhupada was always supported by his affectionate father on the spiritual path.

Preaching Was His Childhood Play 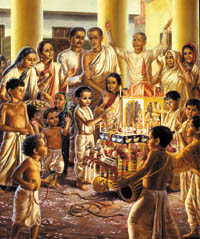 When Srila Prabhupada was five years old, he desired to hold a Ratha Yatra festival like the one held annually in Jagannatha Puri, attended by millions. When he heard his father could not afford a new wooden ratha, he began to cry. This attracted the attention of a passing Bengali women who kindly let him buy her old ratha. Srila Prabhupada enlisted the help of the neighbourhood children and their mothers in an elaborate eight-day spiritual festival that he continued annually during his boyhood. This same festival would eventually be established by Srila Prabhupada on five continents.

14 Responses to The Prabhupada Story–Part 1