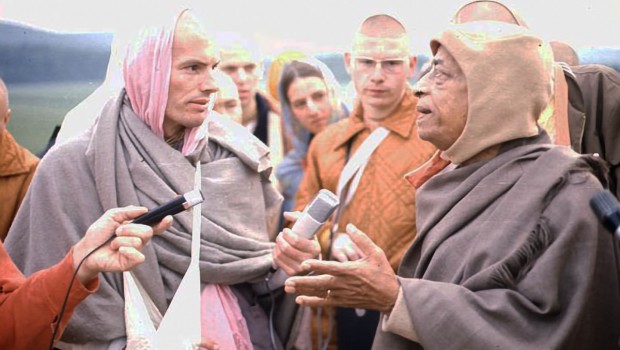 WHAT THE ACHARYA, SRILA PRABHUPADA, DID IN TEN YEARS.

All the while, Prabhupada was constantly traveling, going around the world at least twelve times from the age of 70 until 80 years. Plus he recruited from countries all all over the world over 5,000 young boys and girls as his disciples, who served him enthusiastically, giving up sinful life and chanting Hare Krishna in towns and villages world-wide.

The ACHARYA is one who sets a milestone in the evolution of the SAMPRADAYA, as Srila Vyasadeva did by recording all the Vedic literatures, as Chaitanya Mahaprabhu did by introducing the sankirtan movement and as Thakur Bhaktivinoda and Srila Bhaktsiddhanta did by introducing and utilising all modern facilities for preaching the message of Krishna consciousness. Srila Prabhupada took that message and presented it to the whole world in English, subsequently translated in all languages of the world, his purports being so clear and concise that anyone reading his books seriously today becomes transformed and awakened to Krishna consciousness. Therefore he is the ACHARYA, because he has made all the people of the world conscious of Krishna by bringing Krishna in the form of His books.