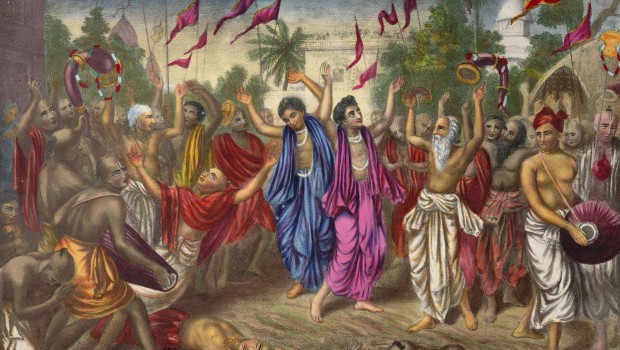 As we have come to know ISKCON, we have become aware that it is a representative of tbe main stream of Indian Vaishnava religion. As such they follow teachings and practices which have a venerable tradition in India.

A STATEMENT CONCERNING THE INTERNATIONAL SOCIETY FOR KRISHNA CONSCIOUSNESS

My name is John Gordon Melton, and I have been requested to make a statement on the International Society for Krishna Consciousness (ISKCON) with special reference to some specific questions, I am a graduate of Garrett-Evangelical Theological Seminary (MDiv, 1968) and Northwestern University (PhD, 1975) with a doctorate in the history and literature of religions. I am the founder and director if the Institute for the Study of American Religion, a research facility in Santa Barbara, California devoted to the study of religious groups and organisations with a special interest in so-called New Religious Movements, i.e., those many groups which have originated in the West or come to the West from other parts of the world and have recruited members from the local populations. I am also (since 1985) a research specialist with the Department of Religious Studies of the University of California Santa Barbara and an ordained minister in the United Methodist Church.

As part of my official duties I have written some twenty-five books, including two college texts: The Cult Experience (1992) and The Encyclopedic Handbook of Cults in America (1986, 2nd ed., l992). I have also authored a variety of what have become standard reference books including the Encyclopaedia of American Religions (4th ed., 1992); Religious Groups in America: A Directory (1991); and the Encyclopaedia of African American Religions (l993). Along the way, I have consulted with the U. S. Army; on the issue of new religions’ service in the Armed Forces, and assisted the Army Office of Chaplains in the preparation of the several editions of their ‘Handbooks on the Beliefs of Certain Selected Groups’. (1978, 1991). Some consideration of ISKCON was included in most of the books named above.

Since I have concentrated my study on New Religious Movements since the 1960s, I have frequently been called into court to speak about various religious groups, including ISKCON. Several of the new religions such as ISKCON have been controversial due to the unfamiliarity of the public with the new and different ideas and practices they espoused. Early concerns voiced by the parents of some young adults in the 1970s, turned into a laundry list of charges against ISKCON and a number of other groups lumped together as what in North America were called “cults” and elsewhere “sects” or other labels. Much of the scholarly work which has been done on New Religions during the last two decades has been devoted to examining the many charges which have been brought against them.

Further distorting our research on New Religions has been the insertion of several pseudo-scientific hypotheses concerning the nature of life in groups like ISKCON. For example, during the 1970s, two people, neither with any medical training, announced their discovery of a new disease. Having discovered this new disease, before announcing their findings to the world in a popular text, they found no need to check their findings with anyone with medical training. In spite of their ignorance of medicine and physiology, they asserted that various very common religious practices such as prayer, meditation, and chanting, including the chanting practised in ISKCON, caused actual brain damage by denying the brain of its food, i.e., information. This bizarre idea was presented in a book called ‘Snapping’. For a brief time, members of what had by that time become part of an anti-cult network hailed the book and several popular news-stand magazines such as Science Digest ran articles about it. However, it was never considered a serious scientific hypothesis and after several articles in scientific journals refuting the book’s ideas, Snapping soon passed from the scene.

More recently, several people have espoused the idea of brainwashing (also termed thought control, coercive persuasion, or mind control). Proponents suggested that cults had discovered a new psychological technology, a technology which has somehow escaped the rest of the psychological world. With this technology it “brainwashed” young recruits and held them with such force that they are unable to break the spell of attachment to the group. These ideas which seemed to actually have a body of evidence behind them, provoked a heated debate among social scientists in the early 1980s. In the mid 1980s, the whole brainwashing perspective was thoroughly evaluated by the American Psychological Association. After looking at a detailed report prepared by the major advocates of this perspective, the American Psychological Association concluded that the idea of brainwashing and mind control as popularly applied to the new religious movements was scientifically unacceptable. It had been arrived at through a sloppy methodology and poor scientific work. Subsequently the American Sociological Association and the Society for the Scientific Study of Religion reached a similar conclusion. As a result, testimony concerning brainwashing and mind control have properly been banished from consideration by American courts as an idea lacking any scientific credibility.

Having made these several general reflections, let me turn to some consideration of ISKCON. I have observed this organisation since it’s emergence into prominence in the early 1970s and its founding of a Centre in Chicago, where I was then residing. Because of their unique dress and, to the average Westerner, their unusual practices, such as chanting Hindu kirtans on the street, they were most photogenic and were soon singled out to illustrate articles on cults and new religions.

As we have come to know ISKCON, we have become aware that it is a representative of tbe main stream of Indian Vaishnava religion and follows the same scriptures used by many denominations of Hindus. In the West they have many followers within the Indian ethnic community and are a part of most Hindu ecumenical organisations in both North America and Europe. As such they follow teachings and practices which have a venerable tradition in India, Also like most older religions, including Christianity, they follow scriptures which were written centuries ago when modern ideas such as those about democratic government or the rights of women were as yet not developed. As most Christians are aware, the Christian Bible is quite compatible with and in many ways, very supportive of autocratic government. Many leading Christian theologians have argued against democratic tendencies. So too are many Hindu holy books such as the Bhagavad Gita compatible with autocracy. However, just as Christians have developed a commitment to democratic values, so too do members of ISKCON have such a commitment.

I have also seen no lack of commitment to the values of family, marriage, or the duties of a married couple, to their marriage commitments. However, like Roman Catholic orders, at the same time, ISKCON members place a high value on the celibate ordered life and a number of its members have become the equivalent of monks and nuns. The value placed on such an ordered life is no more an attack upon the family than that implied in the existence of Franciscans or Dominicans.

Life in ISKCON, while strange to many Westerners, follows a pattern established many years ago in India. It includes spending regular periods each day chanting a mantra, eating a vegetarian diet, and, for some, living a semi-communal life style. While these practices are certainly different from that of most people, there is no evidence that following such practices have had any harmful effect upon either the Indian public or any person ever affiliated with ISKCON. There is simply no evidence that ISKCON’S religious practices adversely affect mental or physical health. While many anti-cult leaders have repeated such charges over the last two decades, they have failed to bring forth any supporting evidence.

It is of note that thousands of people have at some point in time joined ISKCON and later, finding it not to their liking, have left it and re-entered the larger society none the worse for their experience. Others, who affiliated have found it a very happy life and have married and had children, and now see their young adult offspring becoming members . Within the past few weeks I have attended a convention of young adults born and raised in ISKCON. At that time I had the opportunity to meet with people who have left ISKCON altogether and assumed positions in college and the work place, those who are marginal members of ISKCON, and those who are full members of the community.

ISKCON has been forced to spent its formative years in the full light of a skeptical media and critical, even hostile environment. It has been thoroughly scrutinised, in part as a result of several lengthy judicial reviews, for more than two decades. No substantive charges levelled at it have stood the test of such examination. For example, in the case brought by former-member Robin George against ISKCON, it was charged that ex-members could never again reintegrate into “normal” society or have a stable family life. However, the only people brought to testify to this point were former members who had already by the time they testified been able to find a place in society and develop a new set of acquaintances outside of the group. It turned out that the great majority of charges against ISKCON were simply a standard laundry list of items which have periodically been used against different new religions as public attention moves from one to the other.

Simply put, ISKCON has been present in the West for twenty five years. If it was, in fact, a danger to society, we would have long ago discovered that threat and dealt with it. Rather than a danger, ISKCON has shown itself capable of raising up a religious community which turned a number of people alienated from society in the 1970s into substantial law-abiding citizens who have in turn developed a program of service to the community through its efforts to feed the poor and other acts of charity. ISKCON does not threaten any Country’s constitutional freedoms. Quite the opposite is true. In a series of cases it has been demonstrated that ISKCON’s constitutional freedoms have been continually threatened by its having to repeatedly defend itself on issues which have previously been considered by Courts and discarded.

I am not a follower of ISKCON. On a theological level I can find little with which I agree or with which I resonate. However, as a private citizen, I have no complaints and I would petition this court to act in their favour unless and until it has been demonstrated, by common standards of evidence, that they have acted against the state or have broken specific laws.

28 Responses to Is the Hare Krishna Movement a Cult?